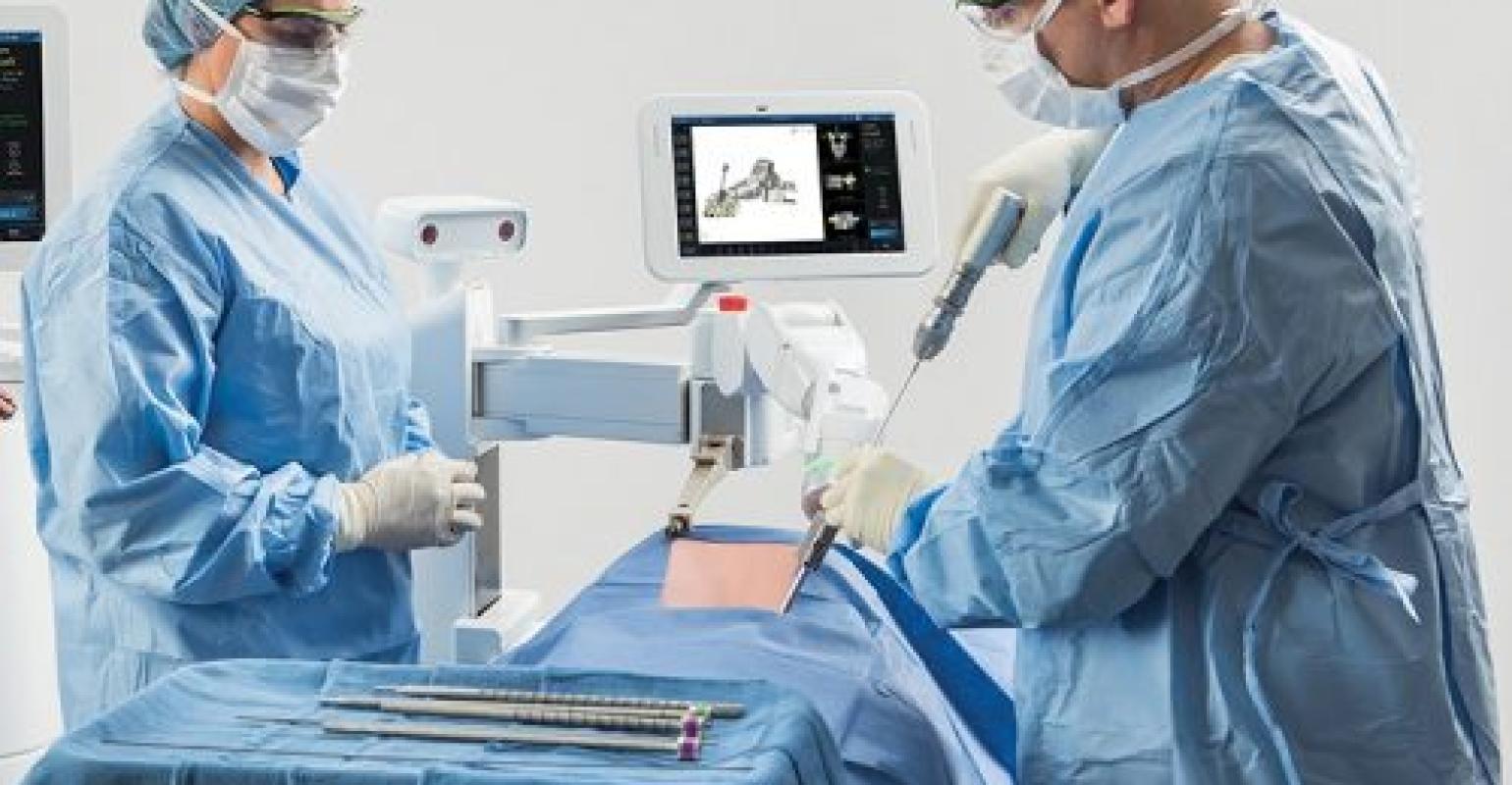 Co-developed by Medtronic and the recently acquired Mazor Robotics, the system represents a unique marriage between robotics and navigation.

The first commercial use of the system was at Norton Healthcare in Louisville, KY and Reston Hospital Center in Reston, VA.

"It is rare that huge sectors of technology such as robotics and navigation merge into a sole platform as found in the Mazor X Stealth Edition," said Jeffrey Gum, MD, an orthopedic spine surgeon at Norton Leatherman Spine. "Combined, these may provide more predictable and reliable execution of our procedure workflows. Computerized surgical planning, 3D assessment of spine anatomy, robotic guidance, and live navigation feedback are designed to provide a higher degree of accuracy throughout the surgical procedure."

"The marriage of robotics and navigation represents the future of computerized planning and execution in spine surgery. Robotics and navigation have both been shown to improve accuracy and precision in spine surgery," said Christopher Good, MD, spine surgeon at Reston Hospital Center, director of Scoliosis & Spinal Deformity and president of The Virginia Spine Institute. "The Mazor X Stealth Edition is a revolutionary new technology that uses cutting-edge software to plan the surgical procedure, then uses a robotic arm to guide implants and instruments through the steps of the surgical procedure with precision, while simultaneously using real-time imaging feedback to ensure the plan is being carried out as desired."

The Mazor X Stealth Edition was cleared by FDA in November 2018. The system is now available in the United States and is expected to launch in key regions throughout the year.

"As part of our surgical synergy strategy, we believe Mazor X Stealth Edition will accelerate the advancement and adoption of robotic-assisted and navigated surgical technologies in spine," said Geoff Martha, executive vice president and president of the Restorative Therapies Group at Medtronic. "Medtronic is committed to transforming the future of spine care by offering procedural solutions that integrate implants, biologics and enabling technologies like navigation, 3D imaging, robotics and powered surgical tools."

One of the most promising areas of robotic-assisted surgery is in spine procedures. Medtronic closed on its acquisition of Mazor Robotics in December, but the relationship between the two goes back to 2016 when they inked a multi-phased strategic and equity investment agreement. Medtronic became the exclusive worldwide distributor of the Mazor X in 2017 and announced its decision to acquire the company in September 2018.

“The vision is pretty bold. I mean, the vision is to transform spine surgery," Martha told MD+DI in September. "Right now the outcomes in spine surgery are not consistent enough, there’s too much variation across the board, and that’s led to patients not having a lot of confidence in spine surgery. It’s something that’s necessary if you have a structural problem in your back, but unfortunately, the outcomes have been too variable."

The days of open spine surgery where the surgeon is relying on his or her experience over time, without the help of enabling technologies like intraoperative-imaging and surgical navigation are coming to an end.

"We think it’s definitely shifting to a spot where you’re using that enabling technology, not just for technology’s sake but to actually improve patient outcomes," Martha said. "So we believe we can really mitigate that variation and ultimately transform the surgery to where the patients have a lot of confidence in spine surgery like they do when you get a stent put in or something like that.”

Being the market leader in the spine industry, Martha said Medtronic has an opportunity – and in many ways, an obligation – to improve outcomes and patient confidence in spine procedures. That's where Mazor comes in.

"People talk about robotics, but we believe robotic-assisted surgery is a lot more than just a robotic arm," he said. "It's pre-surgical planning software, a robotic arm, interoperative 3D imaging, navigation, powered instruments … all this needs to work together seamlessly in order to enable these better outcomes."

Medtronic also has experience in integrating these types of technologies seamlessly into the surgeon's workflow to remove some of the barriers of adoption, Martha noted.

"This is the first meaningful and sustainable competitive differentiation in the spine industry that we’ve seen in the last decade," he said. "This is something that we believe will define the industry."

That said, there are other large spine companies that are also helping to shape the market with robotic-assisted surgical systems. Stryker, Zimmer-Biomet, and Globus Medical are also competing in the space. Globus sells the ExcelsiusGPS robotic system, Stryker has the Mako, and Zimmer-Biomet has the Rosa Spine. Last week FDA cleared the Rosa Knee System.