This Robotic Exoskeleton Is Making the Impossible Possible 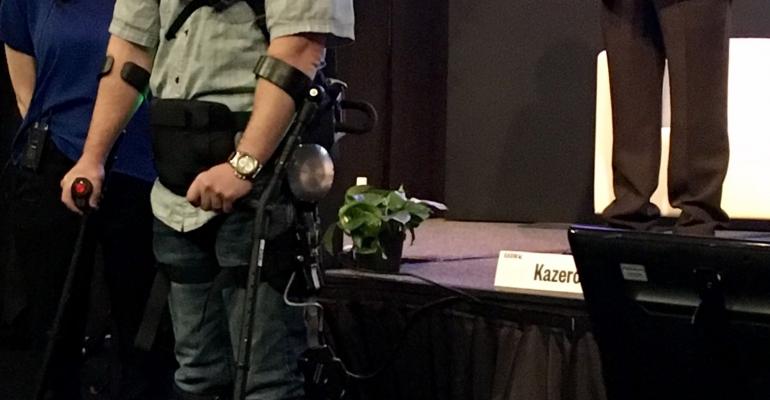 One thing that has become clear through medical innovation is that we should never underestimate the impossible.

Eight years ago, Paul Campbell suffered a spinal cord injury and doctors told him there was only a 3% chance he would ever walk again. With the assistance of the Pheonix robotic exoskeleton from suitX, Campbell walked across a room at SXSW to demonstrate how the technology has turned that 3% chance to a 100% chance.

"I've seen this thing many times, but I still lose my concentration when I see someone walking with one of our devices," said suitX CEO Homayoon Kazerooni.

The Pheonix device consists of two mechanical legs that the user wears and a brace. The exoskeleton legs are powered by a battery that is worn on the user's back, and each leg runs independently with actuators.

"The device is only about 13 kg but Paul cannot feel the weight because the weight will go in the ground," Kazerooni said.

The use of robotic exoskeletons like the suitX Pheonix device allows patients with a spinal cord injury or mobility disorder to stand, walk, and exercise, the benefits of which cannot be overstated, according to Juan Latorre, MD, the medical director of spinal cord injury & amputee programs at St. David's Rehabilitation Hospital in Austin, TX.

"It is a very exciting technology. What we thought was impossible just a few years ago is now very much a part of our present," Latorre said.

Chronic wheelchair can cause muscle shortening, bone fractures, pressure ulcers, and weight gain, which then can lead to co-morbidities like diabetes and cardiovascular disease. In fact, Latorre said, the main cause of morbidity for spinal cord injury patients is heart disease.

Robotic exoskeletons offer an improvement over traditional orthotic devices, such as braces, that have been used for years, he said, because those devices require a lot of energy from patients, and a lot of patients just don't use them long term.

Because the technology does require a learning curve on the part of the patient, Latorre said some stroke victims or patients who have suffered a traumatic brain injury may not have enough cognitive ability to learn how to walk with the exoskeleton.

"The technology needs to improve and needs to be tailored to those conditions," he said.

Currently one of the biggest adoption barriers for robotic exoskeleton technology is the cost. Latorre said some exoskeletons on the market are currently priced between $70,000 and $100,000 and a lot of insurance companies refuse to pay for it. Kazerooni said the Pheonix exoskeleton currently costs suitX between $15,000 and $20,000 to make, but he expects the price to drop substantially within the next 18 months to as low as $5,000, which would make it comparable in price to a power wheelchair. He attributed that cost reduction to new manufacturing methods and technological improvements.

"It is not invasive and eventually it will be low cost and it's something that people can put on and engage in the life that they want to have," said Anna Sternin, a physical therapist and head of clinical operations at suitX.

The way to bring down the price of any technology-driven product is to remove features or special components, Kazerooni said, using cars as an example. The challenge is to find a balance between performance and cost.

"The more features you put in it, the more it costs," he said.

For the Pheonix exoskeleton, suitX eliminated as many sensors as possible and instead incorporated software designed to provide estimations rather than measurements like a sensor would.

The company is currently working toward FDA approval of the device, and Kazerooni told MD+DI that suitX anticipates having FDA approval for the device by the end of the year.