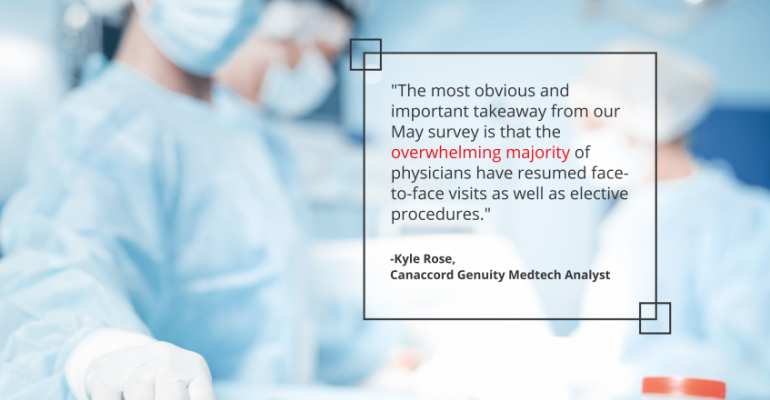 Analysts are reporting signs of recovery in procedure volumes, but getting back to normal is proving to be an uphill battle, particularly for orthopedic and spine surgeons.

From a revenue perspective, the biggest hit on the medical device industry during the height of the global coronavirus pandemic was the fact that most non-emergency procedure volumes took a nosedive as elective procedures. This was necessary both as a safety precaution for patients and to conserve hospital resources for COVID-19 patients.

The good news, however, is that analysts are seeing positive signs of recovery in procedure volumes, particularly in orthopedics, which was by far the hardest hit sector.

In a recent survey of 51 orthopedic practices, Canaccord Genuity analyst Kyle Rose measured the rates of patient volumes since the outbreak of the pandemic and the derivative impacts on orthopedic device makers.

"The most obvious and important takeaway from our May survey is that the overwhelming majority of physicians have resumed face-to-face visits as well as elective procedures," Rose said.

In fact, 86% of the firm's respondents said they are seeing patients in person, up from just 26% and 28% in the analyst's March and April surveys.

"We view this as a positive leading indicator given the importance of face-to-face consults when evaluating significant decisions like undergoing surgery," Rose said. "Similarly, 58% stated they were performing elective surgeries, up from 2% and 0% in March and April."

The timing of a potential recovery also continues to trend negatively, Rose said. Only 18% and 27% of his respondents expect procedure volumes to return to normal by the third and fourth quarters of this year, respectively, which is down from 32% and 46% when the firm conducted the April survey.

Physicians surveyed were also relatively pessimistic about how long it would take to "recapture" lost patients/procedures. For example, when Canaccord Genuity conducted its April survey, only 8% of respondents said it would take 12 months to recapture those lost procedures, but the more recent survey shows 25% now expect the recapturing to take 12 months.

Roadblocks to procedure volume 'catch up'

Rose noted that the biggest roadblock to a procedure catch up continues to be operating room availability, which was cited by 51% of respondents.

"While we've heard repeatedly that physicians plan to perform procedures on nights and weekends to add capacity and try to make up procedures, there is a ceiling on operating room time, and thus it is unsurprising to see it rank at the top again," Rose said. "Somewhat more concerning is that patient demand was the second biggest roadblock — cited by 41% of respondents — an important trend to monitor as patient fears regarding hospitals, surgical procedures, and recovery, not to mention the broader economic backdrop (at least as it relates to unemployment) may keep patients on the sidelines for the foreseeable future."

NuVasive offered its investors some optimism last week. The San Diego, CA-based spine surgery company reported in a regulatory filing that it saw a 70% decline in procedure volumes in April but saw a rebound as early as the first week of May. NuVasive said it expects its second quarter revenue to be down by less than 45% compared to the second quarter of 2019, so long as June procedure volumes remain stable.

Commenting on NuVasive's presentation, Needham & Co.'s Mike Matson said he believes there could be further improvement in June, which would mean that NuVasive's revenue decline ends up being even smaller than the company's current estimation. The medtech analyst said NuVasive's report is largely consistent with his recent Google Trends reports, and certainly more positive than the rate of procedure recovery indicated by Matson's consumer survey in May.

Matson said the NuVasive presentation increases his confidence that estimates have bottomed for companies with significant elective procedure exposure, and that investors are likely to see a multi-quarter "beat-and-raise" cycle where companies beat consensus and analysts raise estimates.

"Since most companies did not provide guidance and instead commented on April trends, we believe that most 2Q20 estimates only assume modest improvement from what was seen in April," Matson noted. "With procedures rebounding significantly in May, and possibly continuing to do so in June, we think that consensus 2Q20 estimates are likely to prove conservative."

Matson also said NuVasive's commentary may be a positive sign for companies with significant exposure to other types of elective procedures as well as spine and orthopedic procedures.

Medical Device Reps May Have a Tougher Job Going Forward

The Canaccord Genuity survey also suggests that sales reps may have to adapt their tactics going forward. Rose noted that 37% of respondents said their facility or clinic has changed how it interacts with sales reps, and 18% expect rep access to be permanently altered. In fact, six of the respondents (about 12%) said reps currently have no access and are not allowed in their facility at this time.

Rose said respondents also were asked how limited rep access would impact their practice in the near term, and the analyst shared several of those responses: