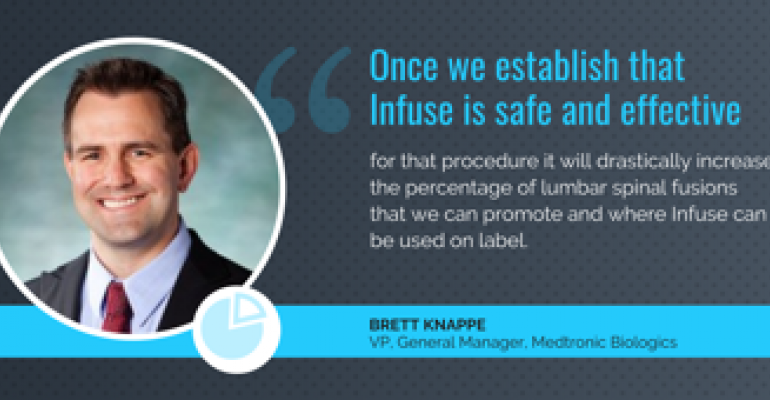 FDA has signed off on a new randomized pivotal trial for the use of Infuse in transforaminal lumbar interbody fusion spine procedures. The news was announced during NASS just one day after an academic surgeon panel revisited the controversial history of the biologic product.

FDA has signed off on a new randomized pivotal trial for the use of Medtronic’s Infuse bone graft in transforaminal lumbar interbody fusion (TLIF) procedures. The news was announced during the recent North American Spine Society meeting in Chicago, IL, just on the heels of a panel discussion that revisited the controversy surrounding the product.

Infuse contains a recombinant version of bone morphogenetic protein-2 (rhBMP-2) and is designed to help with bone fusion. TLIF is a type of surgery that fuses bones of the spine through a posterior approach. It is used to treat certain painful conditions of the lumbar (or low back) region of the spine.

Today Medtronic’s Infuse bone graft is approved for two indications, anterior lumbar interbody fusion (ALIF) and oblique lateral interbody fusion (OLIF) when used with certain PEEK or Titanium cages. In 2017, the company announced FDA approval of a separate study to evaluate Infuse in posterior lumbar fusion (PLF) procedures. Medtronic said that study, which is a prospective trial, is currently enrolling patients and the company is working with FDA to incorporate retrospective safety and effectiveness data sufficient for indication expansion in PLF.

“Once we establish that Infuse is safe and effective for that procedure, it will drastically increase the percentage of lumbar spinal fusions that we can promote and where Infuse can be used on label,” Brett Knappe, VP and general manager of Medtronic’s biologics business, told MD+DI in an interview at NASS. “So right now ALIF, OLIF represent call it 20% of lumbar spine fusions but as we add TLIF and PLF we think that will increase it by another 60%. So it’s important for us to make sure that the majority of patients are getting the product in its intended use and the way it’s been studied.”

As some of the surgeons on the BMP panel at NASS talked about, it is possible to use Infuse incorrectly during a TLIF procedure. “For instance, it can cause radiculopathy or other adverse events,” Knappe said. “So, we have designed a procedure and we’re studying it to make sure that when it’s used you get the fusion you want but you don’t get the adverse events that we want to avoid. It’s important that we do provide that guidance.”

Pointing to the big blue “Evidence Is Our Story” button that he and his Medtronic colleagues sported during NASS, Knappe said the company is committed to expanding the amount of data and the amount of guidance it can provide. By conducting an FDA-approved study evaluating the use of Infuse in TLIF procedures, the company will be able to legally educate surgeons about how to use the product in TLIF procedures safely, as established through a randomized controlled trial. The same goes for the company’s PLF Infuse study, Knappe said.

On a broader point, Knappe said, Medtronic is launching a “think twice, fuse once” philosophy to encourage spine surgeons to get fusion right the first time.

“Because we’re not just Infuse, we’re a breadth of biologics,” he said. “We’re not missing from any major category [of biologics].”

Medtronic has initiated site recruitment for the TLIF clinical trial with the potential to enroll up to 50 sites with more than 1000 patients.

“The potential to expand the indications for use of Infuse in posterior spine procedures may give a broader group of patients access to this novel biologic technology,” said Joseph Smucker, MD, an orthopedic spine surgeon with the Indiana Spine Group and a principal investigator in the clinical trial. “When considering the patient, site, and procedure, Infuse can be a powerful option in a spine surgeon’s armamentarium. This study has the potential to add to the broader clinical and scientific evidence regarding use of Infuse and may allow surgeons to better understand its safe and effective use in TLIF procedures.”

Stepping up for Amputee Victims in Ukraine
Jul 13, 2022