How NuVasive Is Keeping a 'Pulse' on a Competitive Market 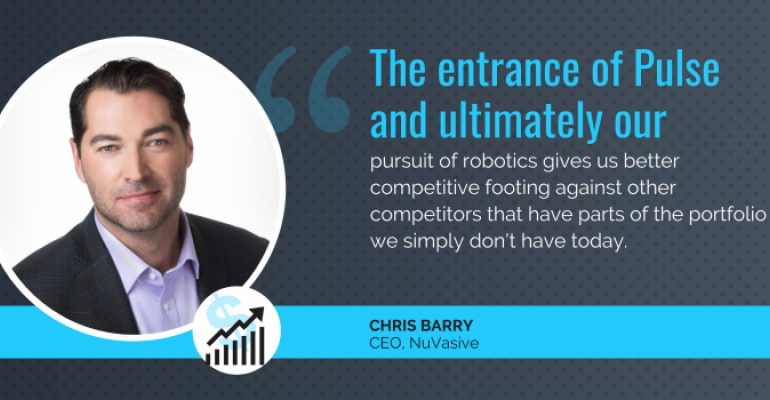 During NuVasive's second-quarter earnings call, analysts prodded the company to talk about the increasing competitiveness of the spine surgical market.
Will NuVasive's Pulse surgical automation platform thrive in an increasingly competitive market?

NuVasive hit an important milestone in July with the FDA clearance and U.S. launch of its Pulse surgical automation platform, and the company is expected to unveil a robotic application for Pulse in late September.

But the spine market is increasingly competitive and many of the key players in the space already have a robot on the market. So how has the competitiveness of the space – particularly on the surgical robotics side – impacted NuVasive? That's what Matt Miksic, an analyst at Credit Suisse, wanted to know during the earnings call.

"I don't know it's having a direct impact on our ability to grow, but it is challenging," Barry said in response to Miksic's question. "The U.S. market is a very competitive market. I do believe some of the competitors that were maybe not as competitive over the last several years have renewed their focus through robotics and some other key technologies."

Barry went on to say, however, that he thinks NuVasive is competing well and that the company's focus on procedurally-integrated solutions has paid off in dividends.

"But, very clearly, the entrance of Pulse and ultimately our pursuit of robotics gives us better competitive footing against other competitors that have parts of the portfolio we simply don't have today," he said.

Pulse alpha and beta trials are underway in international markets with hospital sites identified in Europe, New Zealand, and Australia, and NuVasive anticipates getting a CE mark for Pulse later this year. Additionally, Barry said NuVasive is on track to launch more than a dozen new products this year.

"With the Pulse commercial launch in the U.S., in combination with our robotics application well underway, the current and future product portfolio has never been stronger," he said.

Matt Link, the company's president also pointed out that there has been a trend in the market toward consolidation.

"When we think about consolidation, critical factors include having a comprehensive offering of procedural solutions and technologies, and so the work we've done to really build out the portfolio comprehensively, to really participate in the market as a full-line spine provider, has been critical," Link said. "And then, obviously, the role enabling technologies play is important as well."

Link said the value proposition of Pulse is really around an integrated platform of enabling technologies. One such technology is LessRay, NuVasive's image enhancement platform designed to take low-quality, low-dose images and improve them to look like conventional full-dose images.

"When we think about significant barriers to adoption with respect to advanced technologies and procedures, like minimally invasive procedures, radiation exposure, and imaging integration is a key component, and that's obviously an area where LessRay shines," Link said.

Earlier this year it was rumored that Smith & Nephew was interested in acquiring NuVasive for more than $3 billion. Neither company officially commented on the prospective tie-up, and so far nothing has materialized to substantiate that rumor.