An EKG for the Knee 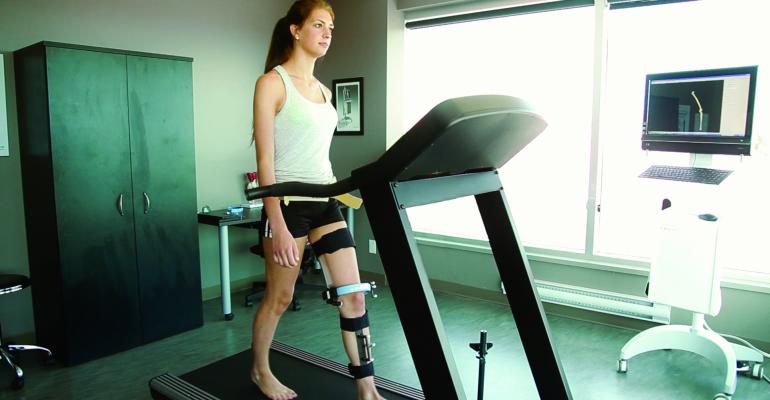 Image of KneeKG courtesy of Emovi
The KneeKG evaluates knee functional deficiencies while the joint is in motion and bearing weight, providing physicians with more information about diseases or injuries than static technologies such as x-ray or MRI.

Knee pain due to arthritis or injury is the second most common cause of chronic pain in the United States. Osteoarthritis affects more than 30 million adults in the United States. And the rate of anterior cruciate ligament (ACL) tears among children and teens has been increasing about 2.3% per year for the past two decades, according to a new study.

The specific cause of a patient’s knee pain has always been difficult to determine because diagnostic tools such as x-ray or MRI only image the joint in a static standing or lying down position, not in motion when the patient is feeling pain.

“So what's been missing is a tool to understand exactly what's going on in the knee, what are the mechanical deficits in the knee that correlate with these [pain] symptoms,” said Michelle Laflamme, CEO of Emovi, in an interview with MD+DI.

Emovi’s KneeKG is an in-clinic device that measures knee function with objective and quantifiable data associated with knee mechanical markers and functional deficiencies. Using this data, physicians can better target treatments, instead of using the current process of elimination method. “It's a bit like an echocardiogram for the heart, but it’s for the knee,” said Laflamme.

She continued by saying that the test is not invasive or painful. “You walk on the treadmill and the system will capture the movement of your knee in 3D,” she said. “So we know exactly when the pain or the symptoms occur and why. And then we provide that information to the doctor.”

The test is performed in a sports medicine clinic, physical therapy department of a hospital, or a physical therapy clinic. The patient’s knee is put into an exoskeleton to eliminate artifacts such as skin and muscle. A camera that is mounted on a cart follows the movement of trackers that are placed on the femur and the tibia while the patient walks. The software then identifies deficiencies in the function of the knee joint. The test takes about 20 minutes.

The KneeKG is suitable for people suffering from knee osteoarthritis, knee pain, ligament injuries, and anterior knee pain/patellofemoral pain syndrome. Patients can be tested for an initial diagnosis and then after treatment to better determine how it is working.

The device is FDA cleared and indicated for appropriate assessment of the 3-D knee motion for patients who have impaired movement functions of an orthopedic cause, according to the company. Emovi will install the system in clinic locations and does not charge an equipment training fee. Training takes about 12 hours, Laflamme said, and the learning curve for the operator is about 10 tests.

KneeKG is currently commercially available in the Unites States, and the company has plans for a wider roll out. “Now we have three installations, and this year we are officially launching the system to expand wider,” Laflamme said. She noted that the company will first concentrate its expansion in the Eastern part of the United States. The KneeKG is also available in the UK, Canada, Australia, and China.