HomeMarketsOrthopedicThis Company Nearly Shut Down 3 Months Ago, But New CEO Is Hauling in $20 million
Recent
Markets
Foster Teams Up with AdvanceSource & More Supplier News
May 27, 2022
Medtronic to Spin Renal Business into New Company
May 26, 2022
Why Diversity in Medtech Matters
May 26, 2022
MD&M South Set to Debut in June
May 26, 2022

This Company Nearly Shut Down 3 Months Ago, But New CEO Is Hauling in $20 million 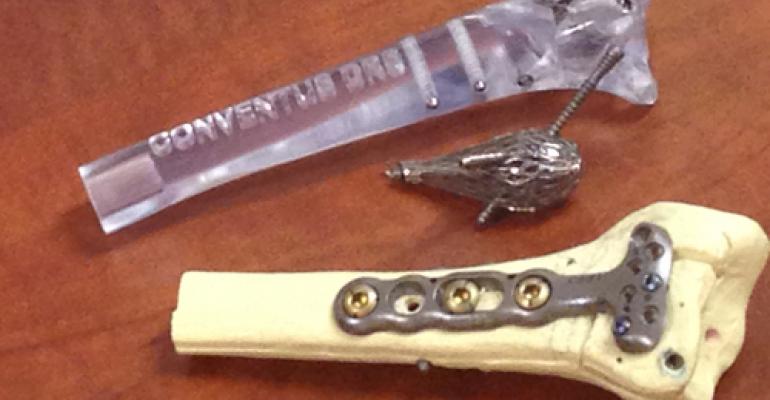 Conventus Orthopaedics had a FDA-cleared device but no money to commercialize its wrist fracture repair implant. Now a new CEO is raising capital and giving the company a second shot to market and develop novel devices.

It’s ironnic that a company with an FDA-cleared device faces an existential threat.

And yet, that was what faced Minnesota-based Conventus Orthopaedics earlier this year. In January, the company won clearance of its implant to repair wrist fractures that is inspired from the world of interventional cardiology. But thereafter the company, founded in 2008, ran out of the roughly $12 million it had raised through a Series A funding round and bridge loans.

Investors would only invest when the company got FDA clearance, but what the company imagined would be a straight forward 510(k) turned into a three-year enterprise.

A regulatory green light came in January, but by that time Conventus’ original investor and its largest investor - TPG - moved away from investing in device startups and declined to make further investment in Conventus.

Then CEO Paul Hindrichs, who has a technical background couldn’t convince venture capitalists that Conventus had developed a novel device to treat wrist fractures - one that was not only minimally invasive but would lead to less complications and faster recovery. They were spooked by the fact that TPG wouldn't want to invest.

It wasn’t until Paul Buckman, who had been a board member since the company’s founding, took over formally as CEO in October, that the financial clouds began to recede. Another executive - David Blue - also joined Conventus as chief commercial officer. [Hindrichs continues at the firm as chief technology officer.]

In a recent interview with MD+DI, Buckman said that investors warmed to his commercial background - he was previously president of St. Jude Medical’s cardiology division and later its corporate vice president of business development - and he was able to tap into some of his business world contacts to receive investment.

Buckman says he has two-thirds of the $20 million recapitalization money that he is seeking. He hopes to close the round early in the new year. [A regulatory filing shows that Conventus expressed an intent to raise $24.6 million, of which $17.9 million has been raised, as of Tuesday.]

“This company almost disappeared three months ago and that would have been a tragedy because this is good technology,” Buckman says.

Conventus’ CEO may have been successful in preventing its demise, but by his own admission, there’s lots more to be done.

For one, he wants to proselytize to more orthopedic surgeons about the value of the wrist fracture implant the company has developed. Conventus currently has five customers, including the prestigious Mayo Clinic, who are choosing to implant the Conventus DRS system over conventional volar plating to treat wrist fractures. Since we has been CEO, almost every week there has been a surgeon brought in to train on the company’s DRS system.

Given all the benefits, surgeons should rush to adopt this. Not so fast, Buckman says.

Volar plating is the gold standard, and surgeons are not dissatisfied with the device, so convincing them to switch to another less invasive product won’t be as easy. Buckman described the challenge like this:

“New technology in interventional cardiology gets adopted fast. Part of the reason is because you’ve got a whole sub specialty of physicians who grew up basically taking procedures from surgery to intervention. With this, we’ve developed a technology that is less invasive but it’s still the surgeon that is doing it. So we don’t have the physician group that is built around taking it out of surgery and making it less invasive. I think [that] leads to a slightly slower adoption rate because surgeons are surgeons. They think, “There’s nothing wrong with how I [repair wrist fractures] now because this is what I do. They don’t like change. It’s like what would have happened if we tried to sell stents to cardiac surgeons. They would have been like ‘They don’t work any better than what I do when I open the chest.’

To counter what he expects will be slow adoption rate, Buckman says Conventus is focused on developing and winning regulatory clearance for its next product based on this technology - one that will repair fractures of the shoulder.

“When we show this device to surgeons today and we tell them it's for the wrist, they look at it and one of the first three things they ask is "Could you make this for the shoulder?" They are so dissatisfied with what's available.”