HomeMarketsOrthopedicBioventus Needs to Find Another Way to Pay for CartiHeal
Recent
Markets
J&J MedTech Lands Clearance for INHANCE Shoulder System
May 19, 2022
The Robot Will Do Your Angioplasty Now
May 18, 2022
XACT Is Changing the Tone of Robotics in Healthcare
May 18, 2022
Medtronic Touts Cusp Overlap Technique in TAVR
May 18, 2022

Bioventus Needs to Find Another Way to Pay for CartiHeal 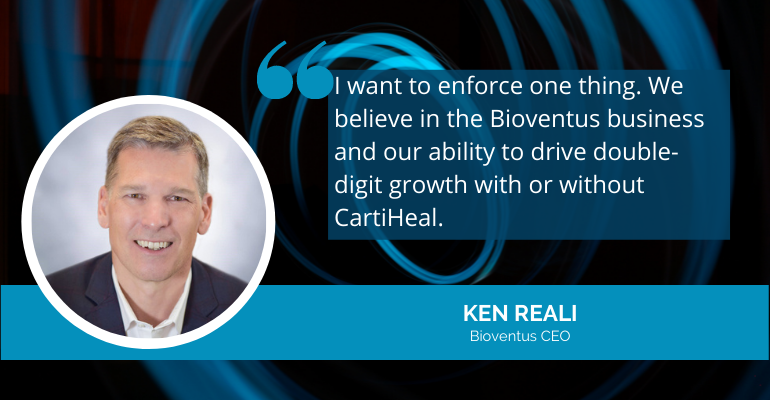 The company has nixed a $415 sale of senior notes that was meant to fund its acquisition of CartiHeal.

Bioventus still wants to buy CartiHeal, but now the company will have to find a different way to finance the deal, which was announced just a month ago.

The Durham, NC-based company said it has withdrawn its offering of senior notes citing current market conditions and is exploring alternative financing options for the $315 million upfront payment to acquire CartiHeal. The deal also calls for an additional payment of about $135 million due upon the achievement of $100 million in trailing 12-month sales.

“We are encouraged by the momentum we’re seeing across our key short- and mid-term growth drivers, which position us for sustained double-digit growth,” said Bioventus CEO Ken Reali. “While we are no longer exploring a senior notes offering to finance an acquisition of CartiHeal, we are looking into alternative financing options.”

The company reaffirmed its full-year 2022 net sales guidance of $545 million to $565 million, based on current trends in its business.

"It's a difficult financing environment, and our goal is to try and find a possible alternative that will maximize stakeholder value in the near and long term," Reali said Tuesday during the company's first-quarter earnings call.

Bioventus invested about $2.5 million in CartiHeal back in 2018 to support an ongoing clinical study of the Agili-C implant. The implant, which is designed to treat osteoarthritis, received a breakthrough device designation from FDA in 2020. Bioventus exercised its option to acquire Israel-based CartiHeal in April after FDA approved the Agili-C implant in late March.

"I want to enforce one thing," Reali said during the earnings call. "We believe in the Bioventus business and our ability to drive double-digit growth with or without CartiHeal."

He also called CartiHeal's technology a game changer, but said it is not a "finance-at-all-cost situation."

Bioventus is in discussions with its banks as well as with CartiHeal.

"Any financing consideration cannot and will not impair our ability to drive the significant potential we have with the Bioventus business today," Reali said. "So any options that we look at, that is the lens ... We're not going to get into specifics today on what we're looking at."