A Bionic Hand Fit for the Last Jedi 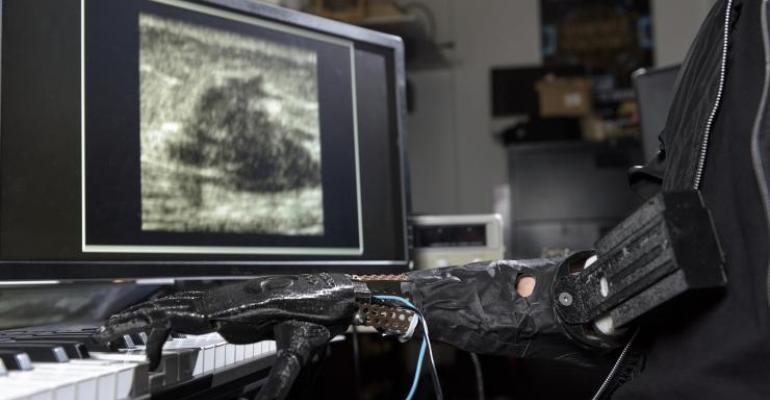 Jason Barnes lost part of his right arm in 2012. He can now play the piano by controlling each of his prosthetic fingers. The arm has an ultrasound sensor, allowing it to watch the muscles as they move.
Georgia Tech released a new bionic hand designed to provide amputees with full hand dexterity and movement, right down to each individual finger.

Researchers from Georgia Tech are giving high fives in a whole new way this week ahead of the release of one of the world’s leading prosthetic devices for amputees.

The new technology aims to provide amputees with full hand dexterity and movement, even down to each individual finger. The innovative bionic hand was designed to provide amputees with a new found sense of precision using an ultrasonic sensor that can produce fine motor hand gestures that were previously unattainable through any prosthetic currently on the market.

The news just so happens to drop the same week as the latest Star Wars film opens in theaters across the country, where viewers will see the original bionic hand that inspired the technology worn by Luke Skywalker. The first amputee to use the new bionic hand was even able to play piano for the first time since losing part of his arm in an accident five years ago.

The new bionic hand works to detect which fingers the amputee wants to move without the need for any switches or buttons. Other advanced prosthetic devices currently on the market use electromyogram (EMG) sensors that attach to the muscles, and then use different muscle contractions to clamp certain fingers together. While EMG sensors have been useful for amputees in the past, they lack any acute sense of dexterity or accuracy, making the device difficult to operate and prone to errors.

So the team from Georgia Tech decided to turn to ultrasound to see how they could improve on current prosthetic technologies in an effort to provide simpler hand flexibility and individual finger movement. The team began by attaching an ultrasound probe to the arm, much like the kind of probe used on pregnant women to view babies in the womb, but this probe would be used to see how muscles move.

The result was a groundbreaking new bionic hand that provided finger-by-finger control for the first time — allowing amputees to grip anything they want on the fly, without pressing any buttons or changing device modes. The latest prototype has shown that a prosthetic that can provide enough dexterity to play the piano will undoubtedly provide patients with the ability to do regular day-to-day tasks like bathing, grooming, and feeding.

The genesis of the project actually began to take shape last year when the same group of engineers developed a wearable robotic limb designed to mirror movements and respond to music in the surrounding environment. The end result was a robotic “smart arm” that could respond to human gestures and music, enabling an amputee to play the drums.

Now,  this new bionic hand device will become the latest in a string of projects in the works to help develop advanced prosthetics over the next decade. As this group of engineers push forward with the new prosthetic hand, they hope to continue to bring improved movement and dexterity to the device, and in the process, potentially usher in a whole new generation of advanced bionic limbs for amputees around the world.

Medtech in a Minute: Abbott Drops a Huge Announcement at CES, and More
Jan 07, 2022