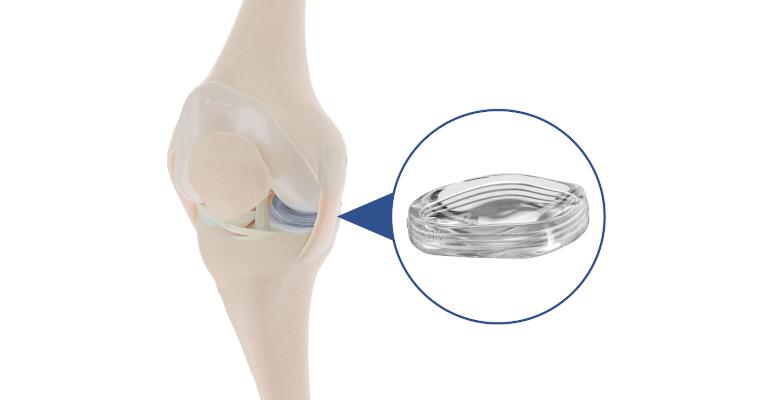 Active Implants’s NUsurface is intended to take the biomechanical place of the absent meniscus. A study shows reduction in pain.

The MERCURY study, which is the longest and most extensive study of a meniscus implant, showed that patients treated with Active Implants’s NUsurface device experienced a 10-point improvement from baseline in Knee Injury and Osteoarthritis Outcome Score (KOOS) pain measurement. The NUsurface meniscus implant is an investigational treatment for patients in the United States with persistent knee pain following medical meniscus surgery. It is made from medical-grade polymer, and, owing to its materials, composite structure, and design, does not require fixation to bone or soft tissues, according to the company.

“The important aspect of the NUsurface implant is that it fills a very important treatment gap for patients who have undergone significant medial meniscectomy, are experiencing pain and functional limitations, but have not yet developed osteoarthritis in the medial compartment,” said Wayne Gersoff, M.D., in an interview with MD+DI. Gersoff is a MERCURY study investigator from Advanced Orthopedic & Sports Medicine Specialists in Denver, CO.

He said that prior to the development of NUsurface, patients ranging from 40 to 75 years old could only employ palliative treatments, such as bracing, medications, or injections, for their symptoms. He said that usually surgeons would not attempt any other treatments until the patient had developed osteoarthritis. Older patients who had developed osteoarthritis or who had enough deformity would be eligible for unicompartmental replacement or tibial osteomy.

“The implant works to reduce pain by decreasing the stress across the joint,” Gersoff said, explaining that the actual meniscus works as a load reducer across the joint surface and that without the meniscus, there is increased load on the joint surfaces, with increased load on the underlying bone, which results in pain. “The implant takes the biomechanical place of the absent meniscus and reduces the load by acting as a new shock absorber, and therefore decreasing pain.”

The MERCURY study enrolled 242 patients experiencing knee pain after a previous meniscectomy—176 were treated with the NUsurface implant, and 66 received nonsurgical therapy. The study found that 84% of the patients treated with the implant experienced a 10-point improvement from baseline in the KOOS pain scale. Obese and older patients had the highest response rates.

An additional finding emerged as well. MRI evidence showed that the implant may also preserve femoral cartilage, while the control group patients showed evidence of significant cartilage deterioration. Gersoff mentioned that this finding may not be statistically significant. “But the fact that there was no worsening and potentially some improvement in joint surface maintenance of the cartilage, that's a really great thing,” he said.

Gersoff concluded by saying of the implant, “It's just such an innovative technology that really fills such a large treatment gap and that would benefit so many people.”

The NUsurface implant is currently marketed in Belgium, Germany, Italy, the UK, and Israel. It was granted a Breakthrough Device Designation by FDA is 2019, and is currently under review by FDA.