HomeNewsVein-Illumination Device Helps Clinicians Stick it the First Time
Recent
Foster Teams Up with AdvanceSource & More Supplier News
May 27, 2022
Medtronic to Spin Renal Business into New Company
May 26, 2022
Why Diversity in Medtech Matters
May 26, 2022
MD&M South Set to Debut in June
May 26, 2022 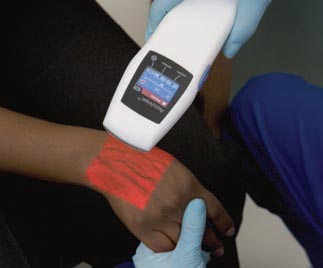 Providing a blood sample is an activity enjoyed by few patients. Luckily, clinicians are well-versed in venipuncture, and it can be a relatively quick and painless process. Unless a patient has "difficult" or hard-to-detect veins, that is, in which case, the uncomfortable poking and prodding begins.

To minimize opportunities for multiple needle sticks during venipuncture--and thereby improving patient care and efficiency--AccuVein LLC (Cold Spring Harbor, NY) developed the AV300 portable, noncontact, vein-illumination device. "The AccuVein AV300 highlights the hemoglobin in the veins differently than the surrounding tissue, so it helps identify veins for all venipuncture procedures from IV starts to blood draw," says Heidi Siegel, director of marketing communications for AccuVein. "It's really the first vein-illumination device in the industry that is portable and noncontact." The user simply positions the device seven to 10 inches above the targeted area. Employing red and infrared light, the product then shows a real-time projection of the patient's veins on the surface of the skin for clear vein targeting.

Although the device is engineered to be user friendly and simplistic, achieving that final product was not quite so easy. Armed initially with a rudimentary proof-of-concept, AccuVein sought a partner that could help take the proprietary system from concept to commercialization. It found one in electronics manufacturing service provider Benchmark Electronics Inc. (Rochester, MN). "The biggest challenges were to take the proof-of-concept and make a repeatable design that we could mass produce," recalls Daniel Dion, senior industrial designer at Benchmark. "We had to create boards and a digital system from [a design] that was previously analog."

Working together, the two companies focused on optimizing the form factor to promote usability and portability--two characteristics that were identified as potential differentiators in the market. Competing vein-finding products were either essentially low-tech flashlights lacking advanced functionality or heavy, refrigerator-sized equipment that could not be moved to the point of care, according to Siegel. With the 10-oz AV300, however, the companies aimed to produce a high-tech device in a compact package capable of being transported in a clinician's pocket.

Human factors testing, extensive industrial design work, and multiple engineering cycles contributed to determining the final design. "Anybody picking it up had to know how to hold the product in their hand, so we went through several form studies to determine what the correct form factor for this product is," Dion notes. "It is crucial that it is held properly for the product to work properly, so we had to find out the right way to hold it. Where we positioned the controls on the product was critical to telling a user who has never seen it before how to pick it up and use it. Through the form development, we were able to do that."

The device's small, lightweight form factor presented multiple challenges throughout the course of the product development cycle, especially in terms of maximizing space and functionality in a small package. Furthermore, the engineers were faced with solving the thermal conundrum of how to cool the heat-generating product without the use of a fan. "We developed a decorative heat sink that goes all the way around [the AV300], which makes the product look great but also has a high functional value," Dion says. "That's how we get the heat out of the device; it's the actual heat conductor that acts as the heat sink for the product."

Benchmark also designed all of the boards and the software in addition to providing software integration and making such complex parts as the optoelectrical engine that serves as the driving force behind the product's complex functionality. "I think it is truly the first portable, noncontact, vein-finding device that has been developed," Dion says. "There have been others that have been fairly crude, but with this one, the efficacy of allowing you to find the vein has increased so much because of the technology behind it."