Technological advances are the springboard from which the medical product industry develops new and more-refined diagnostic tools. But, as Analogic Corp. (Peabody, MA) discovered, those advances sometimes push beyond the scope of current manufacturing resources. And sometimes, good old-fashioned teamwork is the key to a solution.

Analogic has been a pioneer in medical imaging technology since 1975. As a developer of computed tomography (CT) systems and subsystems, the company introduced a lightweight, low-power mobile CT unit, a breakthrough that helps bring diagnostic imaging to trauma centers, intensive-care units, and surgical theaters in the United States, and new markets around the world. Analogic is also one of the leading suppliers of MRI power systems and ultrasound diagnostic medical imaging systems. 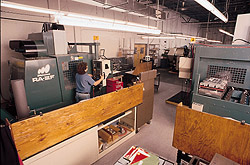 Using CNC machining technology, engineers at Lemco-Miller were able to achieve tolerances of 0.0004 in.

In 1995, Analogic began production of a new proprietary medical imaging subassembly for an OEM partner. The new imaging system would represent a breakthrough in price and performance in its category, and the subassembly would be a key factor in accomplishing those goals. The subassembly consisted of plates that would require precisely machined slots.

Analogic's specifications for the subassembly called for machining tolerances of 0.0004 in.—about 11 times smaller than a strand of hair. But Analogic's engineers found that this exacting level of precision exceeded the machining capabilities of its existing machine shop suppliers, who lacked the in-house engineering resources necessary to meet these requirements.

Requiring tolerances as tight as 0.0004 in., the specs were pushing the envelope of the computer numerical control (CNC) machining technology that most machine shops use. Analogic needed to find a supplier—or more specifically, a partner in the process—that could manage this level of precision and affect dynamic programming changes that addressed the statistical variability in machining a part from lot to lot.

The search for a partner that could augment Analogic's in-house engineering capabilities led the company to Lemco-Miller Corp. (Danvers, MA). One of the first machining facilities to become ISO 9002 certified, Lemco-Miller had assembled a strong manufacturing team headed by Glenn Currie and had acquired a reputation for its experience in CNC applications.

"We knew this project posed significant challenges, but we also recognized the strength of the resources that both our companies could bring to the project," says David Miller, Sr., CEO of Lemco-Miller.

Analogic and Lemco-Miller formed an intercompany engineering team to tackle the significant technical hurdles ahead. "If, as they say, two heads are better than one, we had 10 of the best heads in the business working together," says David Miller, Jr., director of operations and marketing for Lemco-Miller. "And, as it turned out, we needed every resource to deal with the level of precision these component parts required."

Usually, Analogic defines the specs and the supplier makes the product, but, in this case, technical personnel from both Analogic and Lemco-Miller stepped up to the plate together to make it happen.

The 10-person team immediately set a series of benchmarks to keep the project moving forward. The timeline allowed two months to create sample parts that would meet Analogic's specifications. The team also estimated that two dozen iterations would be needed just to get to that point. However, before work could begin, the team needed to tackle the software limitations of the CNC machines.

"In CNC machining, the software issues command logic telling the machine to go to specific locations to perform the machining function. However, with this project, we had to go into the actual source codes—the programming—and create constant corrections based on statistical variability of how the machine produced the slots in the subassembly," says Currie.

This required a sophisticated understanding of how to maneuver the 3-D offset correction to a fixed point theoretically based on a dimension in a drawing. Software changes were implemented after an intensive week-long process. The team then put the program on-line and began making the first few iterations of the subassembly, performing adjustments along the way.

Lemco-Miller's engineers had to manage the wide range of variables that can affect the machining process. Because of the tight tolerances, and the need for repeatability, the team designed special fixturing to hold the metal in a restrained state during machining. Lemco-Miller's facility maintained a stable environment on the production floor to eliminate variations in temperature and humidity that could distort the readings.

"A wide range of factors—from the type of fixture used to the ambient temperature on the production floor to the temperature of the machine itself, even the blade sharpness—can affect the accuracy," says Currie. "And when you're talking about tolerances of 0.0004 in., if you change one thing, it's very easy to miss the mark. That's where repeatability becomes an issue, in addition to just getting the original settings right. We really had to be resourceful since we were charting unexplored territory beyond existing CNC technology."

For the inspection process, Analogic produced a powerful video microscope called Micro-Vu that amplifies the view to a factor of 200* and displays the image on a video screen. Lemco-Miller then generated a graph that allows the inspector to compare the actual positioning of the slots with a theoretical location. By enabling the operator to see down to that level of precision and be sure the coordinates line up precisely, Lemco-Miller ensured that the correct tolerances were achieved. The Micro-Vu was located at Lemco-Miller's facility, enabling adjustments to be made immediately on-site.

Overall, the teamwork paid off with greater efficiency than the participants had anticipated. Programming changes were implemented in a week. Eight weeks were required to develop the first production volumes of extremely precise components, but the number of iterations needed was only half of what had been expected. From the initial team meeting to actual production and assembly, just four months elapsed.

Another benefit of the partnership is that Analogic and Lemco-Miller both gear their operations around a just-in-time delivery environment. Analogic does not maintain an inventory stockpile, but takes regular deliveries of small lots that are integrated into its demand flow, right on the production and assembly floor. "It's been a natural process for us to produce and deliver small weekly lots that match Analogic's demand forecast," says Miller Jr.

"We learned a lot about the synergy that a value-engineering team creates," Currie says. "For the concept to really work, both parties need to enter into a true working partnership, be patient, and commit to an open relationship that allows an honest, free dialogue focused on solving the problem at hand."

Analogic has embarked on yet another system that builds on the existing technology but provides more-sophisticated capabilities. Lemco-Miller is also working on this new model, which poses an even greater level of difficulty than the first.

"It's a new challenge," says Miller Jr. "But with the advances we've made together and the open dialogue that exists, we have every reason to expect continued success with this new generation of high-precision instrumentation."