Stryker: We are Playing a Different Offense Than Zimmer 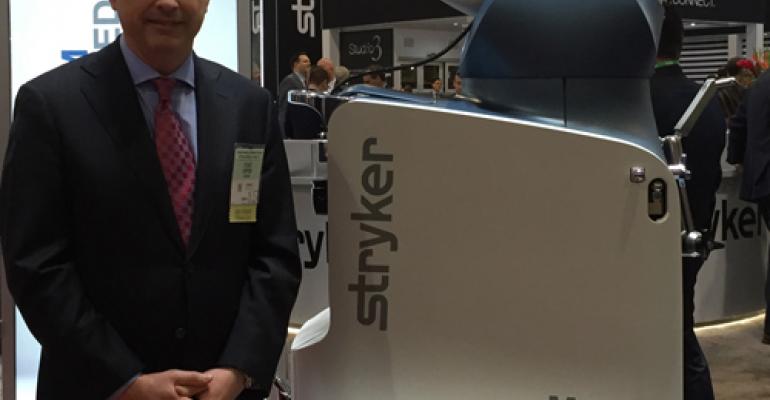 Stryker executives believe that differentiated technology, not consolidation, is the path to win the future and the firm's MAKO's robotics platform is one such novel technology.

Management and employees from the top orthopedic companies were out in full force at the annual meeting of the American Academy of Orthopaedic Surgeons in Las Vegas, that concluded Saturday.

But judging from foot traffic, it appeared that Stryker may have been the winner.

Why the outsize interest compared to competitors?

Surgeons are showing an increasing interest in its MAKO robotics platform on which Stryker's total hip implant is now available. In a bold and unexpected move, Stryker acquired Mako Surgical in 2013 for $1.65 billion.

At AAOS in Las Vegas, executives from the Kalamazoo, Michigan company were demonstrating the product in a private, covered portion of its mammoth booth at the Sands/Expo Convention Center.

"We have had such a tremendous volume of people through our MAKO private area at the back," said Stuart Simpson, vice president and general manager of Stryker's reconstructive commercial group, in an interview at AAOS Thursday. "We had over 200 physicians come to our MAKO event last night and many of them are competitor surgeons who really want to take a look at this technology."

While rivals like Zimmer and Biomet, and to a smaller extent Wright Medical and Tornier have decided to consolidate against market pressures and achieve scale, Stryker seems to believe than technological innovation will be the path to success. Or at least that is what the company is communicating pubicly after its interest to merge with U.K.-based Smith & Nephew was leaked compromising any potential deal.

Simpson declined to comment on anything related to Smith & Nephew, but more broadly addressed the issue of the strategy that will help to win the future.

"I do believe that MAKO will transform surgery and I do believe it will help us differentiate and accelerate our market share position by differentiating rather than consolidating," Simpson said. "So we are playing a different type of offense versus Zimmer."

The company expects to win FDA approval on a Stryker total knee application by the end of the year and commercialize in 2016. Armed with the approvals and growing clinical data, Simpson hopes to be able to convince skeptical surgeons of the robotic-assisted trend in orthopedic surgery.

"We are in over 200 hospitals in the United States and we have MAKO programs in 15 countries around the world," Simpson said. "We sold 20 systems in the U.S. in the fourth quarter and so nearly 10% of our installed base was in the fourth quarter, so that gives you an idea of the momentum."

Analysts who cover Stryker confirm the interest from surgeons.

"Surgeons expect Stryker to be the no. 1 market share taker in hips/knees in their practice over the next 12 months, a very bullish early indicator regarding the expected MAKO sales ramp," wrote Glenn Novarro, an analyst with RBC Capital Markets in early March, based on a survey of orthopedic surgeons.

Simpson said the company has 65 ongoing clinical trials and the company's goal is to talk about the clinical value of the product in their bid to convince surgeons to adopt the system.

"There is very compelling data in the unicompartmental knee replacement using a robot, using a Mako robot versus conventional surgery," he said.

They revolve around better function after the surgery. Novarro wrote that using the system would allow surgeon's to be consistent in hip and knee procedures even though there are no time savings in the OR.

To convince physicians and then have them persuade hospitals to buy the MAKO system will need both clinical and economic effectiveness data, both of which Stryker is building, Simpson said. While a Stryker spokeswoman declined to reveal price of MAKO's RIO system, it reportedly costs $1 million up front.

Perhaps that is why Simpson described the purchase as an investment, underscoring the difference between buying a MAKO robot from purchasing any other expensive hospital equipment.

And yet despite all the confidence in the belief that the future of orthopedic surgery lies on robotics, there is a sense that the process will take time. That is not surprising, and Stryker has admitted to overestimating its ability to quickly integrate the acquisition, especially the MAKO sales team.

"We do believe that this is transformative technology and we do believe that eventually it will become the standard of care in the orthopedic surgery in joint replacement," Simpson said. "But we recognize that we are in the very early stages of creating this market."

Arundhati Parmar is senior editor at MD+DI. Reach her at [email protected] and on Twitter @aparmarbb
0 comments
Hide comments
Related