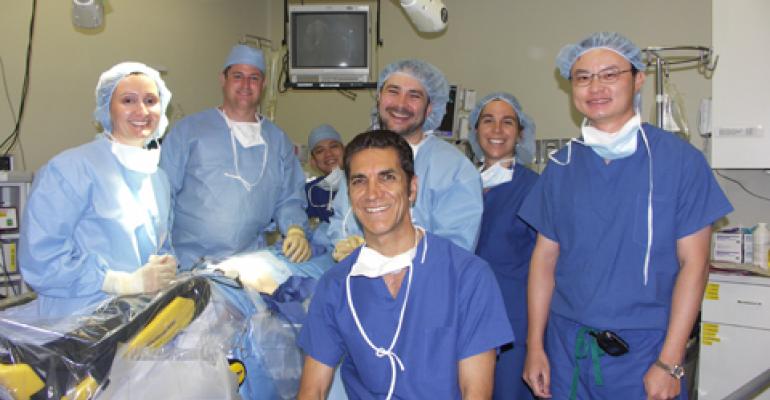 Much of the focus on robotic-assisted surgery focuses on the technology itself (ever hear of the da Vinci robot?), the benefits of a minimally invasive approach, and the high costs associated with using these devices. However, the technology obviously can’t be used without physician instruction, which involves special training.
“We know that the limiting factor for performing minimally invasive surgery is surgeon skill and experience and the availability of proper instrumentation,” says Camran Nezhat, MD, a laparoscopic surgeon at Stanford University Medical Center (Palo Alto, CA). Nezhat is widely recognized as a pioneer in his field, especially for his use of video in laparoscopic surgery, and says that there aren’t enough surgeons in the United States and worldwide that are trained perform advanced MIS or robotic surgery. “If you want to be great at anything, and surgeons should be at their craft, you havepractice a lot. They cannot practice on humans; we need simulators for them.”
Current shortcomings in available training technology introduce an opportunity for medical device manufacturers to develop simulators that train surgeons on performing minimally invasive and robotic surgery. “In the same way that pilots, before they start flying, must log in thousands of miles of flying in simulators—we should be going in the same direction for surgery,” says Nezhat.
Often called the “father of modern operative laparoscopy,” Nezhat is leading research to demonstrate the effectiveness of simulation training and how it can affects patient outcomes. More specifically, the study is comparing simulation training for laparoscopy versus robotic software (manufactured by Mimic Technologies Inc.) for the da Vinci Robot, which is made by Intuitive Surgical.
Simulators recreate the same consistency, to some degree, of tissues, vessels, and breathing. “Every year, we train a new group of surgeons to become minimally invasive or robotic surgeons,” says Nezhat. “Instead of sending them to the animal lab, they can practice on a simulator. That has been the purpose of the study.” Stanford University is working with Mimic Technologies on the study. “What Camran [Nezhat] is doing is pretty novel,” says Jeffrey Berkley, PhD, CEO and founder of Mimic Technologies. “Up until this point, we have validation to prove [training on a simulator] is realistic, that it fits within a surgical curriculum, [and] is applicable to some of the training protocols out there. We’ve proven that the simulator can tell whether you’re an expert surgeon or new surgeon, etc. We know that training on the simulator translates to improved performance on the robot itself.” However, most of this proof involves studies that are conducted via a dry lab, where as the Stanford study is measuring patient outcomes and how simulation training curriculum affects those outcomes.
Part of the challenge in training surgeons to use robotic-assisted surgical technology is the time, cost, and available resources. “On average [for] each surgery, instruments alone are about $2000 a session,” says Berkley. “Then there’s the cost of bringing in a team to set up the robot; a proctor who has to observe; training materials—physical models, animals; and then there’s the opportunity cost—if your robot is typically used for surgery, then you’re sacrificing surgery time to train with the real robot, which is why training used to only take place at night and on weekends.” In addition, a simulator costs less than $100,000; whereas the actual robot costs more than $1.6 million.
Simulation technology allows physicians to train offline on a more affordable system at any time, with structured guidance and feedback, and without a proctor or additional instrumentation costs. Its use potentially offers hospital a bigger return on investment as well.
Nezhat wants more medical device companies to produce these systems. He suspects that the lack of simulators on the market might be partially due to the fact that device companies aren’t aware of the need. In addition, there aren’t enough cost effective instruments available to surgeons. “Right now the instruments for MIS are expensive—including video-assisted laparoscopy and endoscopy,” says Nezhat. “We need a lot more companies to produce these products and make them available for hospitals to make them more affordable [the Da Vinci costs nearly $2 million]. We need a lot more computer-enhanced technology [with] better visualization and 3-D cameras.”
In addition to proving the benefits of using simulation technology to improve patient outcomes, Berkley would like to see the process used in credentialing surgeons. “It’s one thing to have cognitive knowledge, but it’s another to have the hand-eye motor skills capable of perfectly executing a surgery,” he says. “I would like to think that this study would encourage medical boards to adopt simulation testing as a standard.”
The Stanford study will produce short- and long-term results, and could last for years, according to Nezhat. It could also have a significant effect on the use of simulation technology. “There’s been an explosion of use of simulation for robotics,” says Berkley. “A lot of hospitals are building SIM centers. If it’s going to work well for robotics, people might be willing to invest a bit more in a laparoscopic simulator. It’s going to have an impact on the way that people train, [which] goes back to the ability to be objectively assessed so training would be applied consistently across the board no matter what institution you come from.”
Maria Fontanazza is managing editor at UBM Canon. Follow her on Twitter @MariaFontanazza.
0 comments
Hide comments
Related