For the first time, military surgeons have performed arthroscopic surgeries in the field, thanks to a headset featuring miniature color display technology developed by Honeywell (Minneapolis) under sponsorship from the Defense Advanced Research Projects Agency (DARPA). The video headset's successful development and early acceptance in the field were due in large part to user research employing realistic prototypes of the device. The prototypes were assembled from parts fabricated using fused deposition modeling (FDM) technology and stereolithography (SLA).

Honeywell's new device replaces cumbersome CRT monitors, making it easier for surgeons to conduct minimally invasive surgeries in limited-space environments. The miniature color display is mounted on a headset and is used to view video images of a patient's internal geometry. 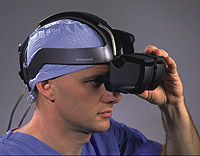 The headset can be adjusted for comfort and optimal viewing.

Honeywell's Technology Center (Minneapolis) develops and evaluates advanced technologies, processes, and product and service concepts for military and commercial settings. The U.S. government approached the center's display group with a concept for a high-resolution miniature display. While the display was initially developed for pilots and soldiers, the group identified the headset concept as a potential application.

Surgeons use video endoscopes for minimally invasive surgical procedures such as arthroscopy and laparoscopy. The endoscope has a miniature camera that transmits an electronic image to a CRT monitor. The monitor is often located several feet away from the operating table, requiring the surgeon to look away from the patient to view the image. Constantly turning one's head is awkward, and looking in the opposite direction of the procedure also can be disorienting. 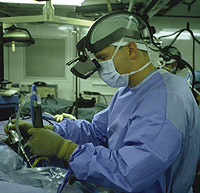 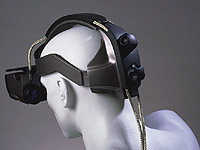 Military surgeons face additional challenges. As equipped as combat-support hospitals are, the medical team is still limited in the types of procedures it can perform because of weight and volume restrictions on equipment that is transported to a field location. The CRT monitors used for endoscopic procedures are large, heavy, and fragile, making them nearly impossible to transport. Thus, the U.S. military currently flies soldiers back to military hospitals for endoscopic surgery.

Honeywell research scientists identified miniature head-mounted display technology as a solution for both ease-of-use and portability problems. After the technology was under development for about one year, the Technology Center brought in Logica, a Minneapolis engineering and industrial design firm, to help design and prototype the device.

Logica and Honeywell designed the 28-oz headset so that surgeons could adjust it for both comfort and optimal viewing. Two miniature color displays are mounted directly in front of the eyes. The video display electronics are contained in a small pack worn by the surgeon.

To obtain feedback on the device, Honeywell and Logica sought input from potential users. In planning for focus group testing, one of the challenges Honeywell and Logica faced was the quality of the color and resolution of the image. Because the miniature color display technology was still in development during initial focus group testing, its image quality was not as high as that of the traditional CRT monitors the surgeons were accustomed to.

The designers were concerned that a low-quality image would bias the surgeons' perception of the entire technology, so they conducted early focus groups without prototypes. "Without a prototype, we quickly learned we could not get meaningful feedback on our design," says Scott Nelson, staff scientist at the Honeywell Technology Center. "It wasn't until 1995 that the miniature display resolution was anywhere near the quality of the CRT. Once we passed that milestone, we needed prototypes, but we couldn't justify tooling costs for focus group research. That's when we turned to Logica."

About one year after the initial discussions with users, more focus groups were conducted--this time using functional prototypes with parts created using FDM and SLA. When selecting a rapid prototyping technology, "we look at the complexity and the size of the part," says Dan Cunagin, Logica vice president of engineering. "We use the Stratasys FDM system because we like its ABS material properties. It's easy to finish, it's strong, and it approximates injection-molded plastic."

Several factors influenced Logica's decision to use FDM for portions of the headset assembly: the strength and heat-resistant properties of ABS, quick turnaround, and ease of modification. "By using FDM technology, we get our parts in hours versus a week or two," Nelson says, "and they are much closer representations to the actual CAD file."

According to Cunagin, machined parts would have been less representative of production parts than rapid prototyped parts. "If we want the surgeons to give us input, we need to provide them with a prototype that looks as much like a real product as possible," Cunagin says. "With any wearable product, the design becomes very sensitive. If the physicians are embarrassed to put the headset on, they may not even get to the point where they're evaluating the technology. But if the prototype is well built from an ergonomic standpoint, we're much more likely to get a fair technology assessment," Nelson adds.

The part across the top of the headset was prototyped using FDM because it is contoured and curved. Cunagin says interface area accuracy on contoured geometry can be difficult to achieve with other rapid prototyping processes. The electronics pack that supplies power to the two displays also was prototyped on the FDM system. The 3 x 2 x 1-in. pack contains a high-density PC board with the electronic equivalent of two television sets, plus video converters. "We chose FDM parts for the electronic covers and case housing because the operating temperature was more than SLA or laminated object manufacturing could withstand," Cunagin says.

For testing purposes, the surgeons were videotaped using the headset for actual surgical procedures. Logica interviewed the participants during and after the procedures, and collected their comments on improving the device. "Once the physicians used a functioning prototype, the advantages became more obvious to them," Cunagin says. "The same surgeons who said they weren't sure about the technology during earlier discussions could now see the benefits immediately."

Four functional headset prototypes have been built to date, with a combination of FDM and SLA parts. More than 24 procedures have been performed successfully using the prototype headsets.