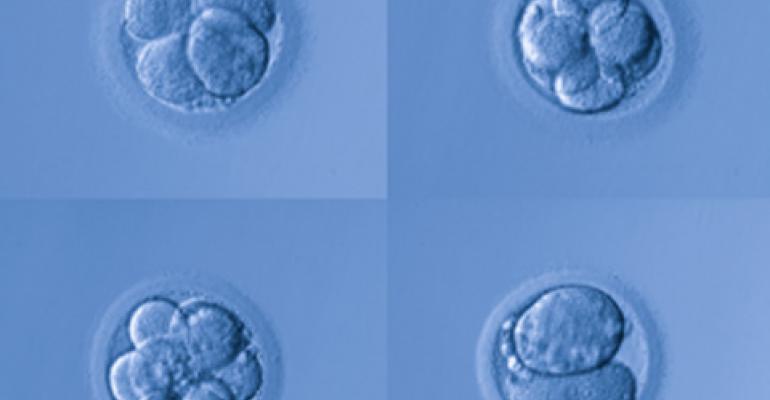 A new test aims to improve the subjective visual practice of embryo selection in vitro fertilization with better imaging and data.

Even under the best circumstances, in vitro fertilization is a gamble.

The percentage of transferred embryos that result in live pregnancies is just 36.3%, according to the Centers for Disease Control and Prevention. Embryologists try to improve those chances by transferring up to three embryos at a time. But multiple transfers also increase the chances of multiple pregnancies, which brings greater health risks.

New York-based Auxogyn aims to improve pregnancy odds with a test that can recommend which embryos are most likely to develop. Cleared by the FDA last year, the Eeva (Early Embryo Viability Assessment) Test is the first test of its kind using imaging technology to track and evaluate embryo development.

For decades, decisions about which embryos to transfer was done solely by eye. Morphology is a visual practice in which the embryologist counts cells and looks for symmetry in their size and shape – indicators of a viable embryo.

But this visual inspection is subjective and can be incomplete. Auxogyn aims to remedy that.

The company’s underlying technology was originally developed at Stanford University. Researchers there found a correlation between the timing of an embryo’s cell division and the viability of those embryos. Using time-lapse imaging, scientists could identify the embryos with the greatest likelihood of developing further. Auxogyn licensed the technology in 2010 and developed the components that now comprise its imaging system.

The Eeva Test employs four microscopes placed in an incubator. The system tracks the development of embryos, recording an image every five minutes. Proprietary algorithms developed by Auxogyn process the images and detect changes. When the embryos are ready for examination, the Eeva Test provides a recommendation of viability, low or high, for each embryo.

Uecker acknowledges that incubators are already available equipped with time-lapse imaging capabilities, which allow an embryologist to view embryos without removing them from the incubator. But the Eeva Test ‘s value lies in the ability to process images and determine which embryo to select, based on a data-driven assessment.

Because Auxogyn’s device goes beyond taking images, FDA determined that Auxogyn needed to go through the agency’s de novo pathway for novel, low-risk products. The Eeva Test secured regulatory clearance in June 2014 and is classified as an “assisted reproduction embryo image assessment system,” the only device in this new category.

Since securing clearance, Auxogyn has been making slight modifications to the hardware and the computer, which now comes from a different vendor. While those changes did not alter how the Eeva Test works, they required an additional 510(k) filing.

Having cleared that hurdle, Auxogyn is moving forward with commercialization. That sales push comes with the support of a bigger organization. In March, Auxogyn merged with Fertility Authority, a website that provides information and helps people find fertility doctors and clinics. Because Auxogyn is a clinic-facing company and Fertility Authority is a patient-focused company, the two complement each other, Uecker explains. Fertility Authority CEO Gina Bartasi leads the combined company, which is based in New York with additional operations where Auxogyn originally formed in Menlo Park, CA.

No financial terms for the deal were disclosed, but securities filings show that Auxogyn recently raised $35 million out of a targeted $40 million. Uecker won’t discuss details about the transaction, though he acknowledges that the recent filing is related to the deal. Prior to the Fertility Authority merger, Auxogyn had raised $38 million in two financing rounds from a syndicate of investors that includes Kleiner Perkins Caufield & Byers, TPG Biotech, Merck Serono Ventures, and SR One. Uecker says Auxogyn has the capital it needs for its U.S. commercialization push.

The company’s device has been commercially available since 2012, when it won regulatory clearance in Europe. Last year, the company signed an agreement with Merck Serono covering distribution of the Eeva Test in Europe and Canada. Uecker won’t disclose which other international markets Auxogyn is eying, saying that in the near term the company is focused on building U.S. sales. But he adds that the company does see the Eeva Test as a worldwide product, useful in all geographies.

The Eeva test sold overseas is nearly the same as the one now available in the United States. But in addition to giving a “high” or “low” recommendation, the European version offers the additional “medium” category. Adding that modification to the U.S. version of the test will require another 510(k) filing. Uecker hints that additional tweaks to the test could be forthcoming, changes that could improve the imaging capabilities or identify markers that help improve embryo selection.

“It’s early in the days of really analyzing the images and finding ways to improve the process,” he says.

Not all reproductive specialists are convinced that this technology is useful.

Norbert Gleicher, medical director and chief scientist at the Center for Human Reproduction in New York City told the Scientific American that the Eeva Test looks for the best embryo out of several embryos, and in many cases women over 40 have average to poor embryos that don't make the cut. In this context, the chances of making a better embryo selection cannot be justified with the additional cost of running this test, Gleicher believes.

Still Auxogyn contends that the test that has been available in Europe for over two years has helped "thousands of couples" achieve a succesful outcome.