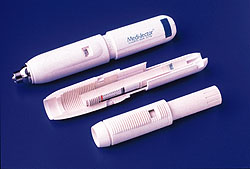 In the competitive medical device market, it is every manufacturer's goal to improve its devices and make them less expensive to manufacture. Designers at Medi-Ject (Minneapolis, MN) achieved this goal when they significantly improved their Medi-Jector needleless syringe, a product that had already achieved market success, by replacing some of the unit's metal parts with plastic.

Triggered by a push button, the device uses a plunger to force liquid through an orifice one-third smaller than the diameter of a 30-gauge needle. The high-velocity microjet penetrates the skin with little discomfort or scarring. The 7-in.-long syringe administers insulin, human growth hormone, or other pharmaceuticals in a three-step operation. The user rotates the device's upper body to compress an internal spring and extend the firing button. Next, he or she attaches the adapter and medicant bottle and dials the dose into the system. With the adapter removed, the stainless-steel drug chamber of the Medi-Jector is then held against the skin and the firing button is pressed.

Internally, the winding action compresses the spring and stresses its containment tube with more than 90 lb of force. Pressing the button releases the spring and drives a steel ram through the injector body housing into a stainless-steel plunger. The impact of the plunger on the noncompressible liquid generates peak pressures in the drug chamber. As the dose is injected, the ram comes to a sudden stop at the end of its travel.

Four years ago, Medi-Ject began evaluating the use of internal parts made of plastic rather than steel or aluminum. "We were going from small-volume production to much larger volumes," says Peter Sadowski, the company's vice president of product development. "As you go up in scale, you don't gain a lot of manufacturing economies with machined metal. Plastic parts bring you lots of cost advantages." The change in materials would also reduce the weight of the injector and improve ergonomics. Furthermore, different drug manufacturers in partnership with Medi-Ject might request modifications in the device, either to accommodate different fluids or to provide a competitive advantage, and a given patient population might require a different type of trigger or a different display. "Making these modifications in plastic is not as problematic," says Todd Leonard, vice president of sales and marketing. "Changes in injection-molded parts are far less costly than those in machined components in large production quantities."

When the Medi-Ject engineers looked for thermoplastics to replace the anodized-aluminum injector body housing and stainless-steel spring containment tube, they faced unique challenges. Sadowski recalls, "We knew we had to have something that could take high shock loads and high impact loads. The primary property we were looking for was strength over the long term." The Medi-Jector syringe was expected to deliver more than 3000 doses, and therefore materials were needed that could withstand even worst-case high-impact loads, such as an accidental firing with no liquid in the device. Filled with a 1/2 cm3 of insulin, the syringe completes its stroke in about a quarter of a second, but with an empty chamber the stroke takes less than 1 millisecond, thereby multiplying inertial and impact loads dramatically.

The engineers considered which parts they could make out of plastic. Since the high-power spring needed the resilience of steel and the injector ram needed its metal mass to work effectively, they settled on the injector body housing and spring tube. Both were vital structural items and required relatively thin walls and dimensional stability. "The challenge was to make the device as small as possible given the mechanical requirements," says Sadowski.

Medi-Ject engineers also wanted to eliminate the lubrication that metal parts in the power pack required to turn freely. These lubricants broke down with time and use, making the winding action difficult. To preserve easy rotation, the selected plastic had to provide lubricity as well as strength.

A survey of engineering resins found few with the qualities needed for the Medi-Jector syringe. Polyetherimide was considered but soon rejected because it was not strong enough for the high loads placed on the tube and housing. "Strength was of primary importance," Sadowski reports. Vectra liquid crystal polymer (LCP) from Hoechst Technical Polymers (Summit, NJ) delivered the needed strength, impact resistance, and dimensional stability. Medi-Ject engineers tested several grades before settling on one that had the strength to take repeated impact loads as well as the lubricity to make winding easy.

Molding tolerances for the spring tube and containment body are proprietary, but since the threads on the plastic help regulate the size of the dose, dimensional tolerances had to be appropriate for medical devices. Vectra LCP reproduced the key details accurately. "Vectra has a low, predictable shrink rate, and good moldability in thin sections," observes Sadowski. The molding task was complicated by the need to overmold a jacket of ABS. "We wanted an outer skin on this that was pleasing to the eye and had also had a nice texture," says Sadowski. With assistance from Hoechst, the overmolding produced a containment body that was both attractive and able to take the impact loads.

The Medi-Ject engineers' efforts have been rewarded with a successful design that makes the Medi-Jector lighter, easier to use, and less expensive to manufacture. Using Vectra LCP, they are able to mold critical internal parts 75% lighter than and half as expensive as metal.