Enables diagnosticians to view multiple films as a series 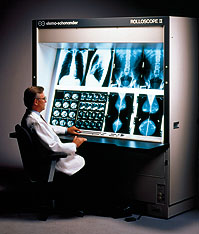 In order to make diagnoses from x-ray film, doctors need to use a tool known as an x-ray viewer. An x-ray film­changer system is essential to a film viewer because without it, diagnosticians cannot view the films as a series.

Every second, Elema-Schonander's high-speed film changer can expose six x-ray films as large as 14 x 14 in. When the system is added to the Rolloscope viewing device, which holds up to 200 large x-ray films, diagnosticians can view a large number of films as a series. The viewer is motorized so that radiologists can quickly and easily review any series of x-ray films.

For the Rolloscope machine, Elema-Schonander needed a reliable and powerful motor that would fit into the viewer's mounting configuration. These requirements were met by a 42A5BEPM-GB Model 4060 motor supplied by Bodine Electric Co. (Chicago). While other manufacturers were unable to fit their motor drives into the film viewer's configuration, Bodine's 42-frame permanent-magnet gearmotor provided a large frame size and strong right-angle drive, supplying the load capacity required to wind and unwind the huge film spool.

Another benefit was the steadiness and power of the Bodine motor. In typical systems, the drums driving the film reels have tortion springs that tend to wind up the drum after the radiologist scrolls to the correct exposure, similar to a window shade retracting despite the care taken trying to keep it steady. For the diagnostician, this is unacceptable because it would cause the film to creep up and out of view. The steady power of the Bodine motor helps eliminate this problem.

In addition, the Bodine motor provides high starting torque, adjustable speed, and predictable performance for a range of operating conditions. Standard features that add to the life of the motor include a vented gear housing, a ball bearing on the output shaft (for increased radial load capacity), permanently lubricated gearing using oil, and a hardened and ground worm hobbed on the motor shaft. A hardened helical output gearing is built in for quiet operation and high output torque.

Seeking reliability and performance in a motor, Elema-Schonander discovered that Bodine could deliver what it takes to power its Rolloscope line of x-ray film viewers.