By listening to the acoustic footprint of a VAD, this monitor can assess function and detect potential future problems with the device.

As more elderly patients live with congestive heart failure, there is a need for technology that can monitor how a ventricular assist device (VAD) will function in the home setting. Researchers at the University of Florida’s (UFL; Gainesville) College of Medicine have developed a monitor for VADs that listens to the acoustic footprint of the device to assess function and detect impending problems.

“We want it for reassurance that everything is functioning in good order so the patients don’t need to worry that they’re going to suffer a catastrophic equipment failure [outside the hospital],” says Charles Klodell, MD, associate professor in the department of surgery and anesthesiology at UFL’s College of Medicine.

Klodell likens the function of a VAD to a jet engine. “There’s a small turbine that spins and propels the blood forward, which takes over most of the function of the left ventricle of the heart,” says Klodell. “The problem is, like any mechanical thing, at some point it is going to break. And when it breaks, that’s a catastrophic problem.”

The concept of the device is also similar to the way in which the military uses acoustic footprints to monitor jet engines. The method detects a problem before it occurs.

According to Klodell, there isn’t a device on the market that is comparable to the VAD monitor developed at UFL. “Right now for VAD monitoring, we monitor the power consumption of how the device is working and download data from the controller of the VAD. We put a stethoscope on the patient’s chest and listen to the device ourselves,” says Klodell. 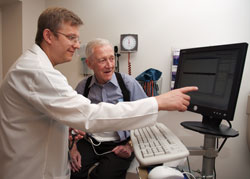 The main components of the device are an electronic stethoscope, computer, and special software. Sensors are attached to the patient’s body and feed to a computer that analyzes the sounds that come from the pump or other areas of the body. The computer, which contains a database of signatures made by different brands of heart pumps, evaluates the sounds coming from the pump to assess whether they match the signature made by a failing VAD.

Wilhelm Schwab, PhD, one of the device’s inventors, is currently working on reducing the device’s size, which is basically a desktop computer on a rolling stand.

Klodell says it is currently difficult for doctors to detect when VADs are beginning to fail. To further investigate this issue, the research team will induce pump conditions in an animal model or the lab to study and document the acoustic footprint difference.

The researchers are interested in working with a company to commercialize the device. For more information, contact UFL’s Office of Technology Licensing
at 352/392-8929.