HomeNewsMetal Injection Molding: Enhanced Processes Offer High-Precision Results
Recent
LabCorp Is Focusing on Skin Cancer with New Test
May 23, 2022
HistoSonics Finds Ally in GE Healthcare for Liver Therapy
May 23, 2022
25 Most Attractive Medtech M&A Targets in 2022
May 23, 2022
Has Medtech Shifted to a Seller's Strike?
May 20, 2022

Parts can be mass-produced from stainless steel and other alloys using recently developed molding technology.

New technologies, cost pressures, and trends such as miniaturization have all had a significant impact on the medical device industry. This is particularly true in the disposable surgical instrument market segment, which requires small, complex, tight-tolerance, high-performance, and low-cost metal components. Over the last five years, enhancements to traditional metal injection molding (MIM) techniques have led to a cost-efficient way to mass produce these types of intricate components out of stainless steel and other advanced metals. This improved process, which is referred to as precision metal injection manufacturing (PMIM), is poised to be an enabling technology for many new, state-of-the-art medical devices. This article explains the PMIM process and its capabilities for the production of medical device components.

Components made of plastic, zinc, magnesium, or aluminum historically have been relatively easy to manufacture cost-effectively in large volumes. Typically, for such parts, a liquid melt is injected into a permanent mold, as in injection molding or die-casting.

Producing a stainless-steel component, on the other hand, has generally necessitated the use of one of several tedious and expensive manufacturing alternatives. These include machining the part from wrought stock, investment casting (using a disposable wax- or polycarbonate-core mold for each part), or forging. Unfortunately, none of these processes alone is able to yield very tight tolerance control, and secondary machining or coining is frequently required.

MIM was developed during the 1980s. In this process, fine metal powders are mixed with a plastic binder and injection molded into "green" components. The binder is then removed—using a solvent, heat source, or catalytic reaction—and the component heated to from 30° to 100°C below its melting point, depending on the size of the particles. At these temperatures the component sinters, and the resulting molecular movement causes the pore spaces in the material (initially created by the binder) to shrink away through a diffusion phenomenon. Although the density of the resulting component approaches that of a machined part, dimensional accuracies are only marginally better than with investment casting, and many items still require secondary finishing work.

In the mid to late 1990s, efforts to improve the MIM process focused on finding a way to mass-produce intricate metal components using permanent molds similar to those employed for plastic injection molding. The PMIM process derived from this desire to overcome some of the shortcomings of MIM and fabricate complex, tight-tolerance components without the need for secondary operations.

The raw material used in the PMIM process consists of approximately 70% by volume of metal powder, which is mixed with a specially formulated plastic. As shown in Figure 1, the powder is of a multimodal composition: finer powders fill the spaces between coarser ones, and still finer powders fill the remaining spaces. The finest powders are submicron in size, with a significant portion of the entire mix made up of particles less than 4 mm in diameter.

The different-sized metal powders are also of different compositions, so as to achieve the desired balance of stainless-steel chemistries. The finest powders in the mix are composed of a eutectic iron, the coarsest are prealloyed stainless steel, while those of intermediate size are composed of a master alloy with a higher alloying content.

Several elements are present in the plastic portion of the mix. One, which appears in Figure 1 as a coating on the powder surface, is a plasticized, cross-linkable thermoset polymer that behaves virtually like a glue. A second, low-viscosity polymer that is easily removed after injection molding fills out the rest of the space. This water-soluble element (though it actually contains very little water) is polyethylene glycol (PEG), which reacts very much like candle wax in that, when heated, it melts like an injection-moldable thermoplastic, but solidifies when cool. However, when put into hot liquid, PEG will easily dissolve. A number of other polymer components and additives occur in the mix, among them antioxidants, coupling agents, internal lubricants, compatibilizers, surfactants, and flex agents.

The metal-plastic mixture is processed in an advanced plastic injection molding machine. (The water-soluble polymer provides low viscosity during the injection molding operation, while the glue-like portion provides strength.) Next, the still-green components are immersed in hot water, where the glue portion of the binder contributes rigidity and the water-soluble portion is leached out. The components then pass through an infrared or convection-type dryer and are cross-linked via ultraviolet or thermal means. A more rigid shell—very much like an eggshell—forms within the component. During subsequent heating, the shell will provide strength to prevent distortion caused by the softening of the remaining polymeric contents of the component. At this point, the debinding phase of the process is complete and the now "brown" components are placed onto high-temperature ceramic plates and put into a sintering furnace.

The components go through several transitions inside the sintering furnace. Upon initial heating to about 500°C, the finest-grained, eutectic-iron portion of the powder forms a "metallic glue" phase. Meanwhile, the remaining polymer thermally decomposes. By virtue of atmosphere control in the furnace, hydrogen is used to decarburize the metal mixture in a temperature range of 600° to 900°C. The intermediate-sized, master-alloy particles diffuse with the iron phase to form the first stainless-steel phase, eliminating most of the material's porosity. When the components are finally heated to about 1300°C—within 75°C of the alloy's melting point—the coarsest-grained, prealloyed stainless-steel portion of the powder diffuses with the second phase to form one homogeneous material, with nearly all porosity eliminated. The final density of the sintered material can be up to 99.8% of that of a wrought material.

During the sintering cycle, components shrink approximately 30% in volume as the space initially occupied by the plastic portion of the mixture shrinks away. This translates to roughly 13% linear shrinkage, which is uniform in all directions (x, y, and z). As a result, mold cavities must be scaled to make up for the shrinkage.

Valve-gated, multicavity hot-runner molds—similar to those used for plastic injection molding—are commonly employed in the PMIM process. Designing the molds requires a good deal of experience and common sense, as smooth transitions must be used everywhere to avoid any separation of metal and plastic, as shown in Figure 2. Because the liquid polymer has a density of approximately 1 g/cm3 and the powder particles have a density of roughly 8 g/cm3, an analogy can be made to stones and water in a stream: at a high rate of flow, the stones tend to move in a straight path and collect behind obstacles, whereas the water splashes around corners. Similarly, powders can accumulate at abrupt direction-reversal points and excess binder may then move to the melt front. This can cause segregation of the powder and binder, resulting in uneven shrinkage during sintering.

Molds with smooth transitions at all direction-reversal points minimize powder/binder separation. Furthermore, the highly filled material will show very little shrinkage during injection molding. For this reason, a large number of ejector pins or blades are typically required, and large draft angles are used to help eject the low-strength, green components.

Injection molding is more challenging for PMIM-produced components than for traditionally engineered plastics for two reasons: fast injection speeds are required because of the melt's high thermal conductivity, and distortion can result from any molded-in stresses released during debinding and sintering.

As a result, screws, barrels, and check rings of extremely abrasive-resistant materials are used in MIM molding machines, along with compression ratios lower than those typically used for plastics. Injection accumulator pressure is fed directly through a high-response servo valve. The servo valve is controlled by a RISC multiple-processor architecture consisting of two 32-bit and two 16-bit microprocessors with distributed intelligence. Transducers in the machine's end-cap or nozzle use direct-melt pressure to control the packing and metering stages of the molding process. In addition, direct piezo-quartz transducers use cavity pressure to control changeover from speed to pack profiles, through either absolute changeover or slope-change-based fuzzy logic.

The machines automatically correct for viscosity changes by comparing the numeric integrals of the melt-pressure curve and numeric differentials of the cavity-pressure curve in the injection phase, and by correcting packing pressures accordingly for the same shot. This advanced closed-loop, feed-forward control ensures that the machine produces consistent, stress-free green parts.

Medical components manufactured using PMIM typically require stainless-steel grades 17-4 PH, 316 L, or 420. Most implantable components use cobalt chrome alloys such as F 75, whereas high-alloy steels such as 4650 and tool steels such as M2 are used for components requiring extreme strength and hardness. Processes using titanium and titanium alloys are currently being developed.

As mentioned above, the mechanical properties of PMIM-produced materials are similar to those of wrought-machined or heat-treated products, with slightly lower tensile properties and superior fatigue properties (because of their finer microstructure). The components lack the brittleness inherent in many cast or pressed-and-sintered components. Depending on the material, ductility values above 20% can be achieved. 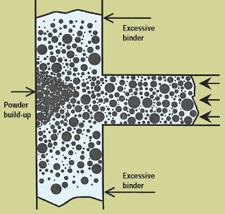 PMIM produces components weighing anywhere from a fraction of a gram to several hundred grams. Because the powder used is more expensive than the wrought bar stock used in machining, however, the process is most cost-efficient for lighter-weight components. However, larger parts can also be cost-effectively manufactured if the material is difficult to machine or if the component has a complex shape requiring many different machining operations.

PMIM can be used to create cross sections from 0.1 to 12 mm (0.004 to 0.5 in.). Smaller cross sections are easier to produce because of their shorter debinding and sintering times. Whenever possible, "light weighting" through the use of core-outs and ribs is advisable. Large changes in cross-sectional areas are also possible, but components with such features are slightly more difficult to produce than those with constant cross sections.

Surface finishes in the 20–30-rms range can be achieved without secondary operations. Mechanical or electrochemical polishing can also be applied to components to achieve mirrorlike finishes.

PMIM is a cost-efficient manufacturing method for mass-produced, complex-shaped components made of stainless steels or cobalt chrome alloys. The technology makes production of many surgical devices feasible without expensive process steps, such as electrical-discharge machining or advanced grinding and cutting.