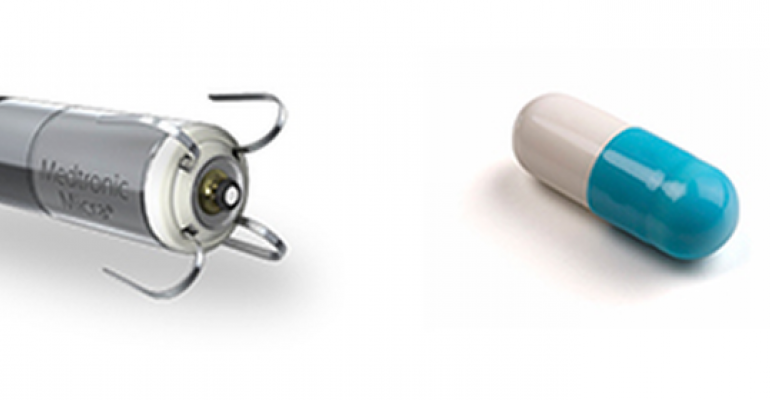 FDA approves the first transcatheter pacemaker made by Medtronic that has no leads in the heart.

FDA approves the first transcatheter pacemaker made by Medtronic that has no leads in the heart.

In what will likely be a surprise for analysts who were expecting the green light later in the year, FDA announced Wednesday that that it has approved the first leadless pacemaker in the U.S. -- the Micra Transcatheter Pacing System made by Medtronic.

This puts the Irish medtech company ahead of St. Jude Medical, which has a competing technology currently being reviewed by FDA. That is the Nanostim pacemaker that the Minnesota medtech firm acquired through the purchase of Nanostim back in 2013 for $123.5 million and up to $65 million in milestone payments. One analyst in a previous research note said Nanostim's FDA approval is likely in the second half of the year. Both products bear CE Mark, though Nanostim received its in 2013, two years before Medtronic's Micra.

In the U.S., the tables have turned.

"We are thrilled to be the first to introduce a transcatheter pacemaker to patients in the U.S., and we're looking forward to working with physicians and educating implanters to extend the positive results of our global clinical trial experience to even more patients," said John Liddicoat, senior vice president, Medtronic, and president of the Cardiac Rhythm and Heart Failure division

The Micra Transcatheter Pacing System contains no leads in the heart that connect the device to it. It functions like a regular pacemaker but is implanted directly in the right ventricle chamber of the heart, according to the FDA.

"As the first leadless pacemaker, Micra offers a new option for patients considering a single chamber pacemaker device, which may help prevent problems associated with the wired leads," said Dr. William Maisel, acting director of the Office of Device Evaluation at the FDA's Center for Devices and Radiological Health.

The Micra is the smaller than the Nanostim pacemaker - about the size of a large vitamin - and is MRI-compatible. In the Micra trial involving 719 patients, 98% of patients were found to have adequate heart pacing six months after following device implantation. The FDA found that fewer than 7% of participants in the clinical trials suffered complications that included prolonged hospitalizations, blood clots in the legs and lungs, heart injury, device dislocation and heart attacks.

In mid February the FDA held a panel to discuss leadless pacemakers. There is a possibility that with the approval of Micra and the expected approval of Nanostim the use of pacing can be broadened to include patients who because of a variety of reasons cannot be implanted with transvenous or conventional pacemakers.

"We look forward to bringing Nanostim, the world's only retrievable and longest-lasting leadless pacemaker with the industry's least invasive and smallest delivery system, to the market to ensure broad patient access to this important therapy," said Candace Steele-Flippin, a St. Jude spokeswoman, in a news release.