MedTech Snapshot International: Are the Next Eleven the Next Frontier? 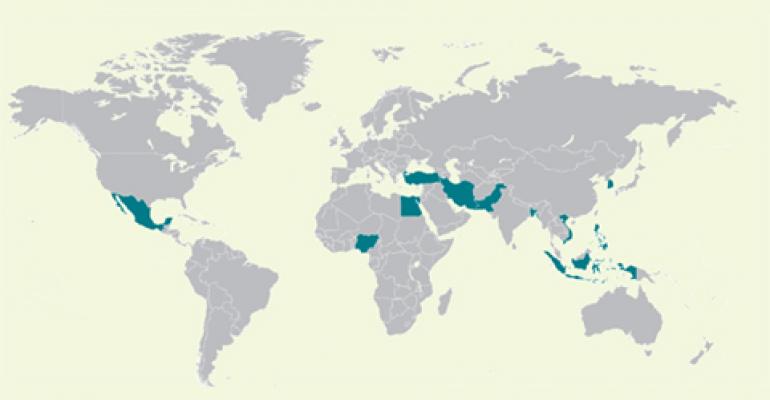 Although many of the N-11 countries are in an emerging state as far as the healthcare and medical device industries are concerned, a few of them are hot on the heels of the BRICs.

In 2005, Goldman Sachs defined the “Next Eleven” (N-11) countries as the economies right behind the BRIC nations (Brazil, Russia, India, and China) in terms of having the most potential to affect global growth. Although many of the N-11 countries—Bangladesh, Egypt, Indonesia, Iran, Nigeria, Mexico, Pakistan, the Philippines, South Korea, Turkey, and Vietnam—are in an emerging state as far as the healthcare and medical device industries are concerned, a few of them are hot on the heels of the BRICs.

Mexico, Turkey, and South Korea have the most viable markets of N-11 nations, in part because they have established healthcare budgets, says to John Babitt, Ernst & Young’s medtech leader for the Americas (New York City). In addition, technologies that fare well in the BRICs will most likely filter into those three markets first.

Within the N-11s, Vietnam is making progress, with an  expanding manufacturing base, rising middle class, and increasing wealth. The country’s medical device market is growing by more than 10% each year, according to the Australian Trade Commission. Despite the estimated growth, more than 30,000 people in Vietnam seek medical treatments in China, Thailand, Singapore, and other locations.

N-11 nations already involved in high-tech industries have a competitive advantage. “Electronics is playing a larger role in the medtech sector and will become increasingly important,” Babitt says. South Korea holds promise as a contract manufacturing site because it already has a controlled manufacturing environment, attractive labor rates, and supports manufacturing in the semiconductor industry.

“In [South] Korea, companies like Samsung already have big medical imaging businesses and a trained workforce,” says Glen Giovannetti, Ernst & Young's global life sciences center leader (Boston). “In terms of where companies and government policies would be, we look to that kind of country versus one that is just emerging out of a low-tech industrial base.”

Although the BRIC nations will have the most immediate economic impact, some of the N-11 countries are positioned to compete—especially as labor rates in countries like China rise. In addition to regional laws, medical device companies will need to examine investment, higher education, and the state of jobs before moving into these regions (see the sidebar, “How to Succeed in an Emerging Market”).

Other N-11 nations, including Bangladesh, Iran, and Nigeria, have a long way to go. It's more likely that rudimentary medical technologies such as wound care devices, infection control products, and surgical devices will be the main players in these regions. "It’s not going to be any time soon that we see a bonified ortho or CRM [cardiac rhythm management] business established in those countries, from my perspective," Babitt says.