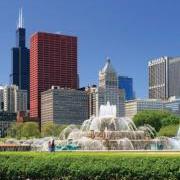 llinois is synonymous with industry. Before the turn of the last century, the state boasted the world's first modern office buildings. Soon, it would build giant steel plants, stockyards, and many other enterprises, becoming the thriving economic powerhouse that it remains to this day. The state is also a repository of major research universities and a plethora of institutions, from hospitals to laboratories to museums. And at the heart of it all is the great Midwestern metropolis of Chicago.

Today, Illinois is the 12th largest economy in the world. And while its healthcare sector is not as developed as the bioclusters that dot California, Massachusetts, or Minnesota, the state still boasts upwards of 200 biotechnology and pharmaceutical companies producing everything from medicines to medical devices.

Concentrated in and around Chicago and in the vicinity of Urbana-Champaign, the region's medtech industry has flourished by melding medicine and manufacturing. This marriage was consummated in the 1880s, when Charles Truax & Co. revolutionized surgical instrument making. By the time the company dissolved in 1920, Chicago had become the leading medical manufacturing center in the United States. Truax's demise was followed by the rise of a Chicago company founded by Donald E. Baxter. Specializing in medical devices, pharmaceuticals, and biotechnology, Baxter International today ranks 219 on the Fortune 500.

Medtech Metamorphosis
Since the 1970s, the Midwest has experienced a steady decline in its manufacturing base, earning it the unflattering moniker "Rust Belt." In response, many companies have shifted gears, applying their manufacturing expertise to a range of high-tech industries, including the biotech, healthcare, and medical device sectors. One example of a company that has transformed itself is Spartanics (Rolling Meadows), a provider of laser die-cutting, hard-tool die-cutting, screen printing, and finishing equipment.

"Our traditional markets in automotive and printing of plastic products such as credit cards, nameplates, and insurance cards have changed over the years," remarks Mike Bacon, Spartanics's vice president of sales and marketing. "That's especially the case with the automotive industry, where the market has suffered. We see medical device applications as a potential new market for us."

Drawing on decades of experience in serving the region's traditional manufacturing industries, Spartanics provides equipment suitable for medical device applications, including flatbed die-cutting systems featuring cut-to-print tolerances of ±0.005 in. It also offers a line of galvanometer laser die-cutting systems that cut gaskets and similar substrates and screen-printing systems that print conductive and traditional UV inks, which work in many medical device applications.

Transitioning into the medical device realm was a natural progression for a company like Spartanics because of the types of equipment it manufactured. Prior to making a big push into the medtech industry, the company had already been pursuing some medical business with its standard die-cutting C-frame presses and other die-cutting equipment. "But once we came out with the laser about four or five years ago, it opened up opportunities for us to venture outside of our traditional die-cutting applications," Bacon says. "Through trial and error, we were pushed into the medical world because we started to get requests for it."

The market has changed dramatically within the last three or four years, Bacon notes. Many of the companies that Spartanics served with its nameplate printing business have fallen on hard times because customers have cut back on their purchases of consumer products. While the company enjoyed success from supplying firms involved in traditional manufacturing enterprises such as automotive, these firms are not growing and purchasing equipment like they used to. "For us, this was one of the things we needed to take a look at," Bacon says. "And now that we make a new line of laser equipment, everything kind of came together at the same time."

Prime Location, Top Schools
While Chicago is not at the geographical center of the United States, its role as one of the country's main transportation hubs places it right in the thick of things. This infrastructure has contributed to the region's emergence as a medtech haven, according to Bruce Nesbitt, president of Surface Solutions Group LLC (SSG; Chicago), a supplier of specialized medical device coatings that has called Chicago home since 1964.

"The transportation power of Chicago plays a large part in SSG's connection with the international medical business, let alone the U.S. business," Nesbitt says. "The confluence of a wonderful public transportation system and a great road system, plus proximity to O'Hare International Airport, puts Chicago squarely in the middle of the  international device manufacturing and coating industry." The reason is time. Thousands of compact medical devices can be shipped in a 20-lb box from anywhere in the world to Chicago overnight. Conversely, SSG ships products to Israel, France, Switzerland, Ireland, and every West Coast state as quickly as if they were located in the next town, Nesbitt notes.

Crucial to the Chicago region's development as a medtech hub are its high-quality labor pool and the area's top-notch colleges and universities, according to Nesbitt. High up on the list is Northwestern University, whose biomedical engineering department at campuses located in Chicago and Evanston offers students a variety of research opportunities in the areas of neural engineering and rehabilitation; cardiopulmonary and vascular engineering; materials, cells, and tissues; and imaging and biophotonics.

"The engineering talent from the schools is awesome," Nesbitt says. Hence, SSG hires interns from Northwestern University, Northpark College, Wilbur Wright Junior College, and the Illinois Institute of Technology, all of which are located in Chicago. "We've also found that the interns from the International Baccalaureate program at Lincoln Park High School have spectacular mathematical and computer skills," Nesbitt adds. "It's a real joy for me personally to see these young minds blossom and get career direction at the same time."

An important center of biomedical research is the University of Illinois. With campuses in Urbana-Champaign and Chicago, the university boasts a variety of research institutes and departments devoted to medical technology research. At the Urbana-Champaign campus, for example, such research is conducted at the micro and nanotechnology laboratory; the materials research lab; and the Beckman Institute, which specializes in imaging. In order to interface with the manufacturing community, the university also offers a graduate program in mechanical engineering featuring a student team program for companies such as SSG, according to Nesbitt.

A Can-Do Business Climate
Logistics, training, and higher education all contribute to making Chicago a center of medical device manufacturing, but the Windy City's business-friendly environment helps grease the skids. For example, when SSG's architect required clarifications about the city's ventilation codes, he dealt directly with the head of Chicago's industrial zoning commission. "Within a few days, we had a green light from the city of Chicago," Nesbitt comments. "Now that we are considering the purchase of a stand-alone site for SSG in the city of Chicago, we are finding that there are many, many programs available through the city and business organizations." In short, he says, local laws promote manufacturing and don't strangle a new idea with more red tape.

Earl Danner, sales and marketing manager at Fotofab (Chicago), does not attribute local companies' growing interest in the medical device sector to assistance from incubators or incentives from government agencies, however. Rather, he sees the cause of this transformation in the region's historical manufacturing prowess. "Chicago's advantage in medical device and other types of manufacturing is that we enjoy access to many specialty job shops that perform specific operations," he says. "For example we do the majority of our plating with a company that has been in operation for more than 100 years and is located just 15 minutes away from us."

Specializing in photochemical etching of thin metal parts from virtually any metal--including titanium, nitinol, and nickel--Fotofab offers production services, complete prototype manufacturing, and design for manufacturability review before actual production. While the company has been in business at its original location in the heart of Chicago for more than 40 years, it opened a satellite facility concentrating on forming and assembly operations in Elk Grove Village, next to O'Hare Airport, in 2008. Currently, the company is fostering collaboration with partners in the Minneapolis/St. Paul area in the medical device field.

Fotofab enjoys a give-and-take relationship with colleges and universities in Chicago and beyond. "One type of work we do is to make parts for more than a hundred universities all over the globe each year, Danner states. "It's impossible to keep track of them all, but most of the parts are prototypes." At the same time, the company relies on the universities' expertise to provide customers with answers to scientific and technical questions. "We just added a new feature to our Web site called 'Talk with an Expert'--a live chat feature that we think will be very useful to students in the medical and other fields."

While the medtech industry in the Chicago region is growing, progress is not as rapid as some manufacturers would like. "We haven't seen a lot of start-ups in this area," Danner laments. "Both coasts far surpass anything that happens in the Midwest."

Nevertheless, Chicagoland has more to offer the medical device manufacturing community than meets the eye. Part of the problem, according to SSG's Nesbitt, is that manufactured components are not as 'sexy' as high-tech end devices. "When you see press releases and stock reports about highflying design and IP companies that create and design devices, never is credit given to the manufacturing talents of the Chicago area," he states. For example, robotic surgical devices receive a great deal of fanfare, but little attention is paid to the Niles, IL, components manufacturer that happens to be the country's sole fabricator of robotic parts used in prostate surgery. Nesbitt concludes, "It's perhaps time that the Chicago area's manufacturing firms that have redirected their companies into medical manufacturing get together to spread the word."