Recently, MD+DI managing editor Brian Buntz had the chance to talk with Thomas Fogarty, MD, who has been involved medical device technology for a half a century. Fogarty is an authority on many subjects ranging from innovation to venture capital. 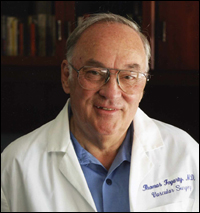 Recently, MD+DI managing editor Brian Buntz had the chance to talk with Thomas Fogarty, MD, who has been involved in medical device technology for half a century. He is the inventor of the Fogarty arterial embolectomy catheter, which has become a standard industry product. He is an authority on many subjects ranging from innovation to venture capital. In 2001, he was inducted into the National Inventors Hall of Fame, joining inventors such as Thomas Edison and the Wright brothers.
At an upcoming conference titled "R&D Portfolio Management," he will speak on the relationship between innovation and company size.

MD+DI: Can you give us a summary of your talk at R&D Portfolio Management?

Fogarty: You know, when you look at the infrastructure of what goes on in medical devices, major paradigm shifts are usually brought up by smaller companies. And smaller companies usually end up being bought by larger companies. If you look at the infrastructure of a large company versus a small company, you know, they are really quite different because of the company’s size, [with a large company] you often really require rules and regulation in order to make sure that people aren’t going in many different directions. And I understand that the large companies are really focused necessarily on profits. [Small] companies are usually focused on concepts that will improve medicine. Not that they are not interested in money. They understand that they have to survive. So they tend to be very conscious of expenses. Large companies not so much. They will spend more money, particularly in the area of marketing and sales. Small companies can’t afford to do that.

There is a very different perspective from the viewpoint of what one does when they are in the marketplace. You know, the large companies are fighting to stay in the marketplace and actually increase market share while the smaller companies are usually interested in displacing whatever technology has the current market share. They recognize and place importance on different things. When you look at the personality of large companies, and this is not true across the board, but it’s true to some extent that the large company employee tends to manage their careers and small company [employees] really manage the product. And that’s a very, very different outlook. Not that they can’t do both whether they be at a small or large company. They can do both.

So, in a nutshell, that’s it. There are many other aspects that I could go into and I probably will when I give the talk.

MD+DI: How often do you think that actually happens? How often is there collaboration between small and large companies in medtech?

Fogarty: I think to some extent it’s going on now. And it’s different within the different divisions of the same company, but, in general, I think that the perspective [of collaboration] is increasing more and more. The evidence of that is that almost all the larger companies now have their own venture arms. That’s to get close to these smaller companies and make investments when they think it is appropriate. They do that because they have to do it if they are going to survive, [as] the large companies are not very good at coming up with significant changes that could alter the marketplace.

Big companies are interested in preserving their marketplace and getting more marketshare, primarily. When you introduce them to a totally new concept, unfortunately the marketplace can’t evaluate it. They can’t study [a new product] that doesn’t exist. And when they go out to determine whether it has value, they usually access the same people who cannot understand that something else other than what they do could exist. If you talk to one of the speciality groups about a technology that will put them out of business, they are going to tell you it’s not going to work, they are going to tell you it’s crazy. And that’s self preservation.

So you have to look beyond that and ask "Is this going to benefit a patient?" And if you look at it from that perspective, I think you’ll be much better off because at the end of the day, it’s the patient that chooses the therapy. The doctor plays a critical role, but as patients get more and more informed about what’s going on, they will often to start to ask questions about an alternative therapy. As well they should. So the whole scene has changed relative to patient acceptance [of doctor's recommendations].

MD+DI: Is this an ongoing trend?

Fogarty: Yes, it’s still ongoing. You know, when this first came out, when people had access to alternative information, most physicians objected to it. The enlightened ones said, well, I better find out about this. We as physicians can’t know everything. And the patient will study in depth their own disease so they are not required to cover a large spectrum of disease states. They study very carefully the one that they have. It’s still ongoing. And it’s increasing in its frequency.

MD+DI: What are your thoughts on the difficulty many firms have in getting VC funding? How will it affect innovation?

Fogarty: That will not change until the FDA changes. The FDA has been a large obstruction in getting technology into the marketplace. Their interpretation of risks are usually inappropriate. They don’t have the background to determine potential risk-benefit guidelines. It would be like me as a surgeon trying to practice internal medicine; I’m ill equipped. They are ill equipped to determine risk-benefit guidelines yet they do it.

MD+DI: How do you believe the current venture capital climate will affect the device industry? In the future, do you think big companies will be forced to do more innovation internally?

Fogarty: Maybe [big companies] will to a certain extent. Most of them understand that they can’t be efficient in the development of new technology. That is not their strength, they do it poorly, and they do it at great cost. What they are going to do is to take advantage of what’s available.

I think that most venture companies are short sighted. Their total objective is to make money as quick as they can. And the way they make it as quick as they can is they do late stage, where they are closer to an exit. I think they are really missing the boat. And they will continue to miss it because many of them can’t do anything other than focus on a later stage because their performance over the years has been very poor. Not all of them [are lacking success]. Some of them have done very well. But in general, if you look at their performance, they do not have a high enough rate of return.

MD+DI: What is your take on the VC climate for medtech startups?

Fogarty: Maybe 10% of the VCs would be willing [to work with early-stage medtech firms]. It all depends on how you define early stage. And the definition of that varies all over the map. If you take the basic concept and you have reasons to believe it will work either by an analogy to another technology or simply by insight and experience, to me that’s early stage.

To me, it doesn’t make much difference now if you identify a venture group that is willing to [work with early-stage medtechs]. Usually, [medical device companies] are going to have a hard time finding money later on.

Funding really is compromised at this point in time. The reason for the lack of money is multifactorial. If you look at what the biggest reason behind that is, it’s probably the FDA, from my perspective. There are many other reasons but that’s the one that appears to be the biggest deterrent. And the only hope we have is that they change. And I think they are trying to change. Whether or not the current political environment will allow them to do that is the question.

MD+DI: Is there hope in the short term that FDA will meaningfully address industry's concerns?

Well, what I’ve told them, is they have to have a sense of urgency. And that means they have got to do something now. Now. And the current rules and regulations allow them to do something now. But the way they interpret those rules and regulations is getting in their way. And that interpretation comes from top down. So, either by direct command they do things [that aren't helpful] or indirectly. The whole culture of the agency has to change.

I’ll give you an example: I was appointed to a task force by the White House. Their sense of urgency is totally different than mine. They want to study what’s going on with the FDA, and come back and report it to them at six months...Then, to implement any changes will probably take two years. That is not going to work. They have to do something right now. Everybody that is doing either early stage or lage stage [projects] are going offshore. They are going to continue to go offshore. You know, first of all, when the venture guys [ask] “where are you going to do this clinical study?” If you don’t say offshore, they say ‘bye bye.’

We have lost faith in the FDA. What the FDA says they are going to do is often not what they do. Until that is changed by example, [medtech companies] are going to continue to exit the United States. Personally, if I can avoid working with [FDA], I do it. Period.


MD+DI: So, I take it you feel strongly that FDA is now moving fast enough to address this problem.

Fogarty: There’s enough in the pipeline now that the FDA has under consideration. And the way they have it under consideration means that it is not going to be in place for the next three to five years. That is not adequate. It’s totally inadequate. [Medical device companies] will continue to exit [the United States] for the period of time that it takes for the FDA to demonstrate that they are going to be collaborative and not combative.