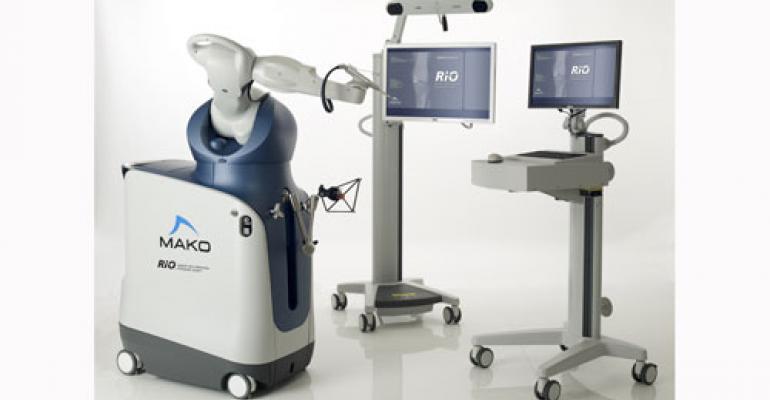 Though the company sees signs that demand for capital equipment among hospitals is improving, it’s still having trouble selling MAKO surgical robots.

Stryker executives noted improvement in the overall hospital capital equipment market in the third quarter of its 2014 fiscal year, but sales of MAKO surgical robots continue to lag behind expectations.

“I would say for the higher ticket capital products that are predominantly in our medical business—although to a lesser degree, in endo—we are seeing signs of strengthening,” Katherine Owen, vice president of strategy and investor relations said according to a Seeking Alpha transcript of the company’s recent earnings call.

Yet, the company still faces challenges with regard to the MAKO Surgical business it bought last year. The eight MAKO robots sold in Q3 was an improvement over the six sold in Q2, but sales are not measuring up to Stryker’s initial expectations.

“…[o]verall we are encouraged by the progress we are making, while recognizing some challenges,” Owen said.

She admitted that Stryker underestimated the complexity of the MAKO integration, citing training and coordination as particular difficulties.

“…[I]t’s nothing truly unique; it’s just, it’s a big job to do, given how large our sales force is,” she said.

The company is nearing the end of its effort to integrate MAKO sales reps into its larger reconstructive sales force, though Owen admitted “gaining near-term sales synergies has proven to be more challenging than we anticipated…”

Stryker hopes to improve sales by expanding the flexible financing options it already offers for other capital equipment to potential MAKO buyers.

After recently completing enrollment of a clinical trial, the company also hopes to gain FDA approval to use MAKO robots for total knee replacement surgeries sometime next year.

And despite the trouble it has had, Stryker continues to remain optimistic about MAKO.

“We are confident that the market for robots is improving, as we have a strong pipeline of deals we are working on closing,” Owen said.