HomeNewsIndustry Experts Make Presentations at MD&M West '98
Recent
Foster Teams Up with AdvanceSource & More Supplier News
May 27, 2022
Medtronic to Spin Renal Business into New Company
May 26, 2022
Why Diversity in Medtech Matters
May 26, 2022
MD&M South Set to Debut in June
May 26, 2022 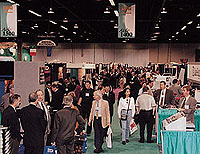 The 7500 medical device manufacturers who attended the MD&M West '98 Conference and Exposition, held January 19—22 in Anaheim, CA, had plenty to see as over 4000 vendors exhibited their products and services. This year's show included pavilions featuring IVD suppliers, medical electronics, and design software and rapid prototyping. At the International Pavilion, attendees could meet with representatives from many nations to get advice on site selection and regulatory issues. Along with these many product and services exhibits, attendees had the chance to listen to industry experts speak at the more than 35 conference sessions that were held during the four-day event.

Regina E. Herzlinger, professor of business administration at Harvard University's Business School, gave the keynote address at the Medical Device Executive Forum. Herzlinger noted that businesses long recognized for their excellence in customer service—such as accounting firms and hotels—have one thing in common: a narrow focus. They limit the number of products they offer, but provide each of those products well. Similarly, "consumer-conscious" health care is characterized by specialized clinics that, like "focused factories," concentrate on particular ailments. As consumers naturally seek an "all-under-one-roof" service model, the market segmentation of the focused factory approach will result in a clustering of providers, creating a market-driven healthcare system.

"A Practical Look at Medical Electronics Design" examined light sources, sensing methodologies, and a new measurement circuit topology, highlighting the breadth of new developments in this field. "Clinicians need quick, inexpensive results," said Kevin Keilbach, senior electro-optical engineer at RELA (Boulder, CO). "They want to run simplified tests and diagnostics in their office that are less invasive to their patients." Device manufacturers are compelled to develop devices using components that deliver a solution. Keilbach's comparison of lights underscored the importance of selecting the appropriate lamp sources for portable clinical and diagnostic devices.

Asia continues to be an area of interest to device manufacturers looking for growing markets for their products. And despite the currency crises, the region—especially India—continues to experience growth. "While India is presently a small medical device market, it will become very large in the next decade," Pratap Khanwilkar of MedQuest Products Inc. (Salt Lake City) told attendees of a session titled "Effectively Targeting Emerging Markets to Expand Your Business." "The time to enter the Indian market is now. Establishment of a brand is critical for penetration of the market and for staying power." Khanwilkar noted that, with India's middle class expanding and the life expectancy having doubled since 1947, the market for medical devices looks promising—growing an impressive 20% annually.

Khanwilkar was more optimistic than the other speakers at the session who discussed the Asian economies and their recent economic turmoils. Nevertheless, James Chan, president of Asia Marketing and Management, a consulting firm that helps U.S. companies sell to Asian markets, said that the Korean medical device market exceeds $1 billion and is expected to grow 10 to 30% annually. Similarly, he noted that Taiwan buys $650 million in medical equipment annually, $200 million of which comes from U.S. manufacturers.

Also speaking at the session was Mohammed Adnan Saaid of the Malaysian Industrial Development Authority. When asked how the 60% drop in the value of Malaysia's currency would affect U.S. device exporters, he said, "It means you must be more competitive. But nevertheless, quality medical devices will always be in demand."

Despite regulatory hurdles and a challenging business environment, China can be a lucrative market for industrious device manufacturers. At the session titled "Effectively Targeting China to Expand Your Business," Lawrence Pemble, executive vice president of the U.S.-China Industrial Exchange Inc. (Bethesda, MD) said that there are real opportunities in China to make money, "but you have to roll up your shirtsleeves and take a real hands-on approach."

Bruce M. Quinn, commercial officer at the U.S. Embassy in Beijing, confirmed this, saying, "A growing and aging population, coupled with an ever-increasing standard of living, is sure to continue to fuel the demand for higher levels of medical care." The Chinese market, which is growing at an estimated 15% annual rate, is the second largest in Asia after Japan. For the past two years, half of the total market demand, which is estimated at more than $1 billion, has been met through imports. In 1996, U.S. manufacturers accounted for approxiametly 30% of medical equipment imports.

At a luncheon speech to attendees of the Medical Device Executive Forum, Congressman Joe Barton (R-TX), chairman of the Committee on Oversight and Investigations and a principal sponsor of the FDA Modernization Act of 1997, said continued oversight will play a major role in ensuring that FDA meets congressional expectations for reform. "We'll be holding oversight hearings during this spring and summer to review the agency's implementation of the FDA Modernization Act," he told the audience of device executives. Describing the process that led to signing of the act last November, Barton observed that congressional oversight has been an important factor in softening FDA behavior toward industry. "We've been told that FDA now has a new attitude in dealing with manufacturers, and this is largely because of the oversight that Congress has exercised over the past three years."

Industry experts outlined situations in which partnership might make good business sense during the session "Pros and Cons of Partnerships Between Early-Stage Companies and Medical Device Firms" at the Medical Device Executive Forum. "If your company has a limited number of decision makers and a highly differentiated product, it may make sense to partner with another company to take advantage of some benefits of such a relationship," said David W. Chonette, general partner of Brentwood Venture Capital (Irvine, CA). Such advantages might include obtaining financing, gaining wider market coverage for a product, increasing access to group purchasing contracts and international markets, and developing possible synergy between product offerings.

The next MD&M Show and Conference will be held June 1—4 in New York. For information on this show, contact the Trade Show Division of Canon Communications llc at 310/392-5509.

The business partners include the company's CEO, Ronald Schaeffer, who has been in the laser industry for 15 years; the president, John O'Connell, who has over 15 years of experience at Spectra Physics, Laser Photonics, and Resonetics; Michael Welcome, an entrepeneur and owner of Precision Coatings Inc.; and Pat Sweeney, a retired CEO of HADCO and board member of HADCO and Manufacturing Services.

The company says that its task is to demystify lasers and allow their use in many manufacturing environments to produce small and high-quality features at competitive prices. The company's Windows-based software platform provides ease of use with standard excimer, sealed CO2, and solid-state lasers. It has the ability to easily control multiple axes, galvanometers, and machine vision, and can allow the user to download many file types compatible with drawing standards. Expansion modules for automation or manufacturing line integration can be plugged in.

Will feature speakers from FDA and other regulatory agencies

Industry and government compliance authorities will be reporting on the newest laws, standards, and major future trends, at the CE Mark for Medical Devices Conference, "MDD '98," which is to be held May 5 in Washington, DC.

The European Union's Medical Devices Directive (MDD) becomes effective June 29 of this year, requiring all medical devices exported to Europe to have the CE mark. As part of the EU's new conformity assessment procedure under the MDD, manufacturers will have to have devices certified by a notified body. All aspects of the new directive, including strategies for compliance, will be covered at the conference.

The program will feature presentations by representatives from the LCIE (Central Laboratory for the Electric Industry) in France, the medical device manufacturing industry, U.S. and European testing labs, notified bodies, FDA and other regulatory agencies. Topics to be covered include European law on medical devices, the conformity assessment process, classification, clinical evaluations, production and product quality assurance systems, and other international standards that manufacturers must know.