Fight Diabetes and Obesity without Surgery 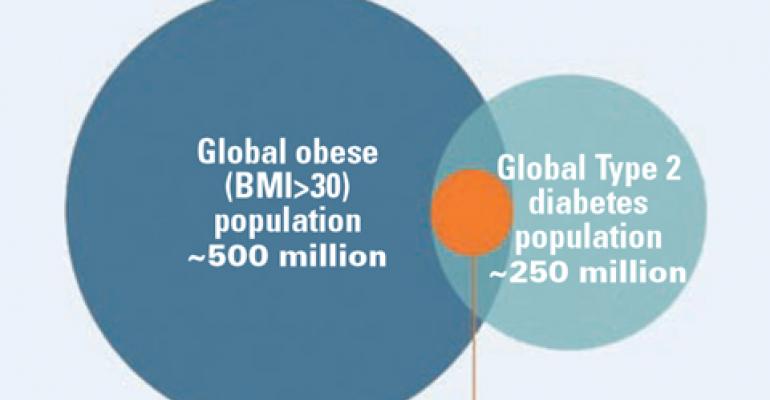 GI Dynamics is taking on obesity and type 2 diabetes with an innovative and noninvasive treatment.

The waistline of the global population continues to grow at an alarming rate. The problem has reached epidemic
proportions, and GI Dynamics Inc. (Lexington, MA) is doing something about it. The company has developed a device that mitigates the risks of bariatric surgery and could be more effective than drug therapy. The device isn’t yet approved for sale in the United States but given the growing rate of obesity and type 2 diabetes, it has strong potential in the U.S. market.
The current method of treatment for obese and diabetic patients includes recommendations for lifestyle changes (diet and exercise) and various medications. In more serious situations, patients opt for gastric band or bypass surgery, but both procedures have serious risks and can lead to complications. “We’re focused very much on the patient that has both type 2 diabetes and is obese,” Stuart Randle, president and CEO of GI Dynamics, tells MD+DI. “For those patients today, there are very limited options. Drugs aren’t terribly effective, and the surgical options most of the patients don’t want.”
Enter the EndoBarrier. The device controls glucose levels and helps patients lose weight. It is implanted via an endoscope through the mouth in a nonsurgical procedure that takes about 30 minutes. The device serves as a barrier between food and part of the intestine wall to delay digestion and intervene with the metabolic process. A 60-cm long liner is implanted inside part of the intestine so that food passes through the EndoBarrier without coming into contact with digestive enzymes—this mimics the effects of gastric bypass.
The device improves glucose control within a few days following implantation and can lead to substantial weight loss over a period of time. It can stay in the body for up to 12 months and is removed with an endoscope. Removal of the device takes about 15 minutes.
GI Dynamics is looking to take the EndoBarrier further.  The company brought a chief commercial officer, Mark Twyman, on board in November to help lead the effort. “GI Dynamics is at the forefront of a major change that is occurring in diabetes care and weight management...," said Twyman in a company release. “Based on the study results seen to-date, I am confident that the EndoBarrier is well positioned to have a material impact on people living with type 2 diabetes and obesity, many of whom have few options to improve their disease and overall health.”
Trials are underway to expand the use of the technology, including for retreatment and improving the device’s anchor. The company is developing the EndoBarrier Restrictor, which is intended for cosmetic or short-term weight loss. The device creates a small hole to reduce the rate of gastric emptying and make the patient feel full. The company has completed a 12-week, 10-patient clinical trial of its EndoBarrier Liner with the EndoBarrier Restrictor to create a platform that treats diabetes and leads to weight loss that is greater than using either device on its own.
Highlights
Focus Going Forward
Leadership
0 comments
Hide comments
Related