HomeNewsFerromagnetic Surgical System Strives to be a Cut Above the Rest
Recent
Minnetronix Improves Image Quality with Surgical Camera and Other Supplier News
May 19, 2022
Abbott Heart Valve Data Shines at EuroPCR
May 19, 2022
J&J MedTech Lands Clearance for Inhance Shoulder System
May 19, 2022
The Robot Will Do Your Angioplasty Now
May 18, 2022

XACT Is Changing the Tone of Robotics in Healthcare
May 18, 2022
Medtronic Touts Cusp Overlap Technique in TAVR
May 18, 2022
Feds Crack Down on Reused Rectal Probes
May 18, 2022
Paige Wins CE-IVD & UKCA Marks for AI that Detects 4 Prostate Cancer Biomarkers
May 18, 2022

Ferromagnetic Surgical System Strives to be a Cut Above the Rest 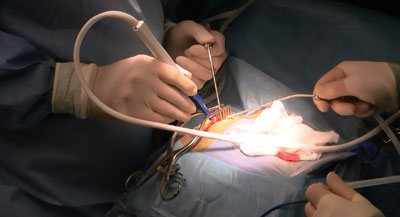 Although electrosurgery has proven to be an invaluable surgical modality for the cutting and coagulation of biological tissue, physicians have been playing with fire in terms of patient safety. Because a high focus of current is applied to the tissue, for example, electrosurgical devices can inadvertently dry out, char, or even burn tissue, which, in turn, can result in longer recovery times and more-severe postoperative pain. Addressing this unmet market need, Domain Surgical (Salt Lake City), supported by partners Eclipse Product Development (Salt Lake City) and Biomerics LLC (Salt Lake City), developed the FMwand ferromagnetic surgical system to enable precise control of thermal energy while minimizing collateral soft tissue damage without the need for direct electrical current to pass through the patient.

An energy-based surgical modality based on ferromagnetic heating, the FMwand is the brainchild of Kim Manwaring, MD, a board-certified pediatric neurosurgeon dissatisfied with the pitfalls of standard electrosurgery. "When we dissect tissue, it can have the undesirable effects of drying out, charring, or even burning tissue," he says. "As a result, the margins get obscured, and it's not as easy to see the edges; those all factor into the inexactness that the surgeon experiences."

Electrosurgery may also induce muscle stimulation, he adds, which further contributes to inexactness of dissection. To avoid such potentially damaging muscle movement, the patient is typically given a muscle relaxant. "[This], in essence, paralyzes a person during surgery on a ventilator, and also affects the lingering recovery time and the cost of the medications," Manwaring notes.

Inspired to find an alternative energy modality, Manwaring developed a prototype of the FMwand system based on the principle of ferromagnetic heating, which requires neither electrical current to pass through the patient nor the use of an external grounding pad. Instead, a generator delivers a high-frequency electrical current to a surgical handpiece, ultimately yielding a rapidly alternating magnetic field in the ferromagnetic alloy-plated loop tip. "The underlying rationale of the system is improved control and dexterity, improved dissection characteristics, and decreased thermal injury so that there are no secondary unwanted effects," Manwaring explains.

Armed with this innovative concept, Manwaring serendipitously met David McNally, an experienced medical device professional and entrepreneur, through a mutual acquaintance. Together, the two launched Domain Surgical to commercialize the FMwand system, with Manwaring serving as chief medical officer and McNally taking the helm as president and CEO. Upon assembling a solid internal team, McNally next reached out to Eclipse Product Development, a company specializing in electromechanical instrument development with which he had a longstanding relationship. "From the very beginning, Eclipse was involved with this endeavor and an integral part of the team, even when we were operating in the first year in a virtual state," McNally notes.

In addition to an extremely rapid design process and aggressive timeline, the two companies faced a number of design and development challenges along the path from early prototype to commercial product. "The most significant hurdle we had was managing the thermal aspects of the device," recalls Phil Eggers, vice president of research and development for Domain Surgical. "Given that our device is a heated surgical probe rather than an electrosurgical device, you have to manage the waste heat and manage the production of heat in an appropriate manner." With Eclipse leading the way with its mechanical expertise, the two companies worked together to achieve an optimal handpiece design equipped with adequate cooling features and control electronics.

The team also grappled with a number of electrical safety challenges that necessitated the identification and subsequent mitigation of risks, according to Kent Beck, principal at Eclipse. To ensure safe operation of the device, for example, multiple levels of redundancy were required within the design, Eggers adds.

Upon working out many of the design kinks with Eclipse, Domain partnered with contract medical device manufacturer Biomerics. Drawing on its varied expertise, the company was involved in creating and validating the molds, injection molding, pad-printing, electrical testing, assembly, and packaging of the product.

Biomerics also faced the daunting task of building and tracking the system's 12 different instrument tips, each of which is defined by its own unique properties and characteristics. Although the FMwand system was initially developed for specialty markets that require precision in dissection, Domain realized that the technology could be adapted for use in a range of medical specialties--including neurosurgery, orthopedic, gynecology, and endoscopic or laparoscopic surgey--by simply modifying the instrument's tip. "While we were doing the assembly and fulfillment process, the greatest challenge was ensuring that each tip was identified and tuned properly so that when it was being used by the doctor, it performed accurately and precisely as they needed it to be done," states Mike Anderson, Biomerics's sales manager.

"What is remarkable about this team was the sense of urgency, clinical focus, and collaboration," McNally says. "Eclipse now resides in our facility, and Biomerics is a local company with a motivated team that has allowed us to achieve our introduction into the marketplace and success at record speed with precious resources. Having previously run a company that tried to do everything in-house, we're realizing [with Domain]the virtue of partnering with experts in design, development, and manufacturing."

And the aggressive timeline and intense collaboration appears to be paying off. Gaining FDA clearance last July and being used in the first human surgeries this past December, the FMwand system is receiving a steady stream of accolades from users, according to Domain. "Surgeons have made the comment again and again about how good the tissue looks and how this device dissects like a hot knife in butter with improved control," Manwaring notes. "In addition, these look like instruments of familiarity to the surgeon, which makes them feel comfortable, but then adds a whole new performance capability."