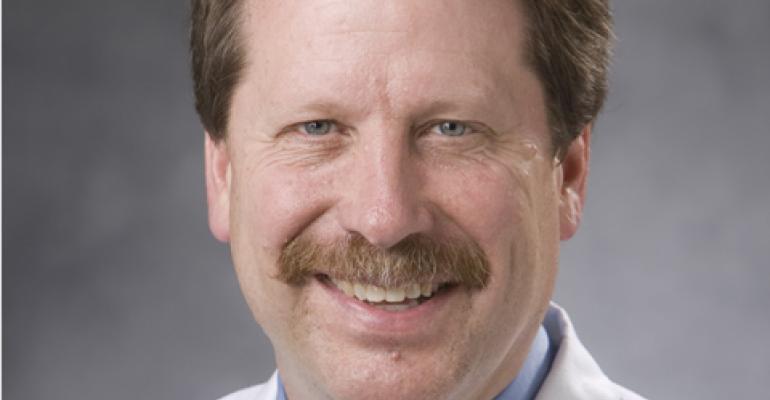 Robert Califf, a Duke University cardiologist and possible successor to exiting FDA commissioner Margaret Hamburg, has been a paid consultant to medical device and pharmaceutical companies.

A Duke University cardiologist whose name has been floated as a possible successor to exiting FDA commissioner Margaret Hamburg has served as a paid consultant to medical device and pharmaceutical companies, records show.

When Robert Califf was named deputy commissioner for medical products and tobacco January 26, The Wall Street Journal cited “people familiar with the agency’s activities” as saying he could become her “heir apparent” if she chose to step down, which she announced less than two weeks after Califf’s appointment she would do.

Califf, who will assume his role as deputy commissioner this month, will leave his position as vice chancellor for clinical and translational research, director of the Duke Translational Medicine Institute, and professor of medicine in the division of cardiology at the Duke University Medical Center. He also previously served as founding director of the Duke Clinical Research Institute (DCRI) and is the editor-in-chief of the American Heart Journal.

Conflict of interest disclosures dating back to 2007 made public by the DCRI show that Califf has been paid for consulting or other services provided to a number of medical device pharmaceutical, and biotech companies, including Medtronic, Acumed, Bayer Healthcare, Merck, Novartis, Roche, GlaxoSmithKline, Bristol-Myers Squibb, Sanofi-Aventis, and Eli Lilly & Co. Califf also disclosed that he held equity in two pharmaceutical companies—Boulder-based N30 Pharmaceuticals and South San Francisco, CA-based Portola Pharmaceuticals—as recently as 2014. Califf retired from Portola’s board of directors January 26, according to a press release from the company.

Despite his industry connections, Hamburg gave Califf a ringing endorsement.

“I have full confidence in Dr. Robert Califf’s ability to serve as the FDA’s Deputy Commissioner for Medical Products and Tobacco,” Hamburg said in a statement mailed to MD+DI. “Prior to joining the FDA, Dr. Califf went through a comprehensive screening process for conflicts of interest, working closely with HHS and FDA ethics staff, including legal counsel. As part of that process, HHS/FDA officials identified Dr. Califf’s potential conflicts and put in place measures to ensure that he is recused from matters that would give rise to conflicts or appearance of conflicts. In fact, during Dr. Califf’s first year at the agency, he is expected to work principally on broad initiatives, such as major legislation, strategic leadership in medical product and tobacco regulation, globalization, and scientific innovation. Particularly with his focus on matters of general applicability during his early tenure at the FDA, we are confident that Dr. Califf’s prior work with industry will not affect his ability to oversee the agency’s regulation of medical products and tobacco.”

In fact, Heidi Rebello, acting assistant commissioner media affairs at FDA, said via e-mail that it’s not uncommon for FDA employees to have a history of working with the industries the agency regulates.

“We have found that hiring experienced leaders with diverse backgrounds in public health, industry, academia, and science enriches the professional environment and leads to the best health policy outcomes for the American public,” she said. “We must, however, ensure that prior activities do not create conflicts or appearance of conflicts.”

She said the agency has a “stringent process for reviewing the financial holdings and prior outside activities” of its employees.

“As a general matter, FDA employees are expected to take steps to avoid conflicts of interest during their tenure at the agency. FDA employees must divest themselves of financial holdings in significantly regulated organizations and cannot participate personally and substantially in particular matters that would affect their financial interests,” Rebello said. “In addition, they must recuse themselves, on a case-by-case basis, from participation in any particular matter involving specific parties where impartiality reasonably would be called into questions [sic], including matters involving as a specific party entities with which they served as a consultant within the prior 12 months.”

Senior-level FDA employees must also do the following:

Of course, whether Califf will indeed be chosen to fill Hamburg’s shoes is still just speculation. When she steps down at the end of March, FDA chief scientist Stephen Ostroff will serve as acting as commissioner until President Barack Obama nominates her replacement. At a press briefing following news of Hamburg’s exit, White House press secretary Josh Earnest said whoever the president nominates to replace her will need “ impeccable scientific credentials and merit bipartisan support,” according to the Reuters news service.