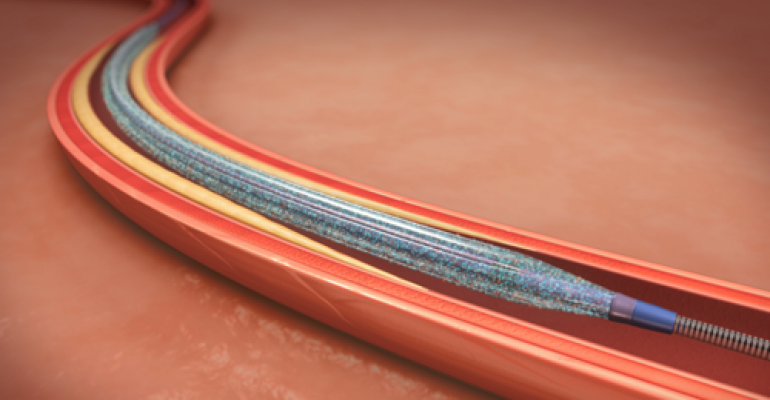 Medtronic's drug-coated balloon is approved in the U.S. to treat peripheral artery disease in the upper leg.

Medtronic announced the FDA approval of a drug-coated balloon therapy for peripheral artery disease in the upper leg on Monday. The product was approved in Europe in 2009.

This is the second DCB that the FDA has approved for commercial use in the U.S.

Medtronic's IN.PACT Admiral balloon is used to open blocked arteries in the upper leg and deliver drug paclitaxel to the artery walls that has the potential to prevent the artery from being narrowed again by plaque. During the procedure, the blocked artery is first partially opened with a traditional angioplasty balloon sans the drug. Then, the Admiral DCB is used to fully open the narrowed portion of the artery. This allows the drug to be applied to the artery wall.

PAD affects 8 million to 12 million people overall in the U.S. and increases the risk for having a heart attack or stroke, according to the National Heart, Lung and Blood Institute.

Medtronic said that in clinical trials the product has shown that it has the lowest repeat procedure rate to reopen arteries at one year following the procedure - in fact only 2.4% of patients required a repeat intervention at one year, compared with one in five or 20.6% of patients requiring revascularization who underwent traditional percutaneous transluminal angioplasty without any drugs – the current standard to treat PAD.

Medtronic’s technology has also demonstrated that the reopened artery can restore and sustain an adequate level of blood flow at much higher rates at one year compared to patients treated with traditional angioplasty.

The company touted the fact that the clinical results were so compelling that FDA approved the device without a vote of recommendation from an independent advisory panel, which is often needed for new category of devices.

"Having shown success in Europe for several years, we are excited to bring the IN.PACT Admiral drug-coated balloon to patients and physicians in the U.S.," said Tony Semedo, senior vice president and president of Medtronic's Aortic and Peripheral Vascular business, in a news release. "In addition to being a key growth driver, the IN.PACT Admiral DCB delivers on our commitment to providing innovative technologies that not only provide clinical benefit, but also economic value."

If the company can sustain the dramatic reduction for the need of repeat procedures outside the clinical trial setting, it should prove to be an asset to a new healthcare system that rewards value and aims at lower costs.

Aside from Medtronic's DCB product, another drug-coated balloon catheter has also hit the market.

In October, FDA approved the world's first drug-coated angioplasty balloon catheter made by Lutonix, which C.R. Bard acquired in a deal worth $325 million in 2011. The Lutonix 035 Drug-Coated Balloon has been available in Europe since 2012.