HomeNewsExpedited Access for the Wearable Artificial Kidney
Recent
Has Medtech Shifted to a Seller's Strike?
May 20, 2022
Medtech in a Minute: The Industry Loses a Legend, and More
May 20, 2022
NeuroOne’s Bid for Long-term Use of Evo sEEG Shot Down by FDA
May 20, 2022
Minnetronix Improves Image Quality with Surgical Camera and Other Supplier News
May 19, 2022 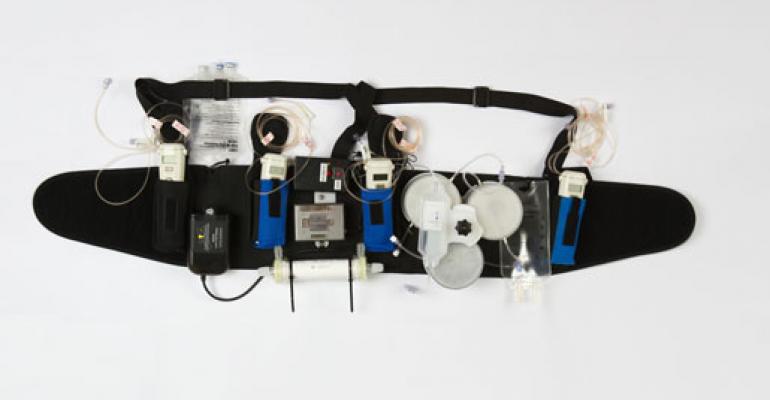 The Wearable Artificial Kidney (WAK) gets a boost to its development process as FDA grants its new Expedited Access Pathway designation to the technology.

Developed by Victor Gura, MD of UCLA/Cedars Sinai Medical Center in Los Angeles, the WAK weighs 11 lbs. and is worn around the waist on a belt. It continuously purifies the blood of toxins, freeing patients from sitting for hours every week hooked up to hemodialysis machines.

The trial, which ran from October 2014 and April 2015, included seven patients, six of whom walked around the hospital while wearing the device, according to a report by UW Medical Center. They drank water at will, and ate salty, potassium- and phosphorous-rich foods, which are verboten for hemodialysis patients whose blood is usually filtered three times a week at a dialysis center.

The WAK filtered the patients’ blood continuously, just like a healthy kidney. Trial participant Chuck Lee, 73, has been diabetic for 40 years and on hemodialysis for the past two years.

“I was amazed at how well it worked for me. It was heavy and cumbersome, but I’d be wearing it today if I could,” Lee said in a video that accompanied the hospital’s report. “It just gives you so much more freedom.”

All patients remained hemodynamically stable, with no serious adverse events, Gura said when he presented a study abstract last week at the American Society of Nephrology in San Diego.

The WAK was one of three devices that won an FDA innovation award in 2012 to improve the field of nephrology. The prize? Weekly phone calls with FDA experts to guide the device’s development.

“We have nothing but good things to say about the FDA,” Gura said. “They’ve been extremely helpful, open and supportive.”

The trial in Seattle was “basically the result of their support and guidance,” he added. It was also the first to allow patients to wear the device for 24 hours.

Gura said he has been working on the WAK for 14 years to give dialysis patients longer, better lives. The device underwent clinical trials in Europe before the U.S. trial.

“I was lucky enough to get a lot of help and support from a lot of scientists of the first rate around the globe,” Gura said.

Landing the Expedited Access Pathway designation “was very, very reassuring,” he said. FDA wants Gura’s team to continue testing for biocompatibility, and the device will need some tweaking to eliminate carbon dioxide bubbles before the next U.S. trial, he said.

The WAK also uses a catheter, “which everyone knows are prone to terrible infections,” said Beth Piraino, MD, immediate past president of the National Kidney Foundation and a professor at the University of Pittsburgh School of Medicine. Still, she finds it very promising in a field that has seen few recent innovations.

“It sounds like they’re well along their way,” Piraino said. “If they’re testing in people they’ve come a long way already.”

Gura said he and his team have devised “lots of ways” to prevent clogging of the catheter and to prevent infection. However, he needs $25 million to bring the WAK to market. It would be competing against proven methods, including continuous ambulatory peritoneal dialysis, in which the abdominal lining filters waste that the patient disposes of three to five times a day, according to the kidney foundation.

More than 430,000 of the 600,000 U.S residents who have end-stage renal disease receive treatment in dialysis centers, according to a report by the U.S. Renal Data System. For-profit companies Fresenius Medical Care and DaVita Healthcare Partners, Inc. operate nearly two-thirds of U.S. hemodialysis facilities and their industry dominance is growing internationally, the agency said.

“When I started this thing, people told me I was a lunatic,” Gura said. “Now that we have proven the concept in three centers around the globe, it’s time to get serious with serious money around the globe, and we will.”