Manufacturers often use packaging to differentiate consumer products vying for attention on store shelves. But can distinctive packaging also give a boost to products sold to businesses and institutions?

This was the question posed by executives at Remington Medical Inc., a supplier of cardiovascular medical devices. Remington decided to give its vascular introducer set, which is used to implant pacemakers in hearts, a new double-blister package that's easier to handle and provides more assurance that sterility will be maintained in the operating room than the original single-blister package. The Alpharetta, GA, company is the first supplier of vascular introducers to use a double-blister style. 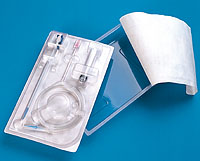 The complete double-blister package designed by Blue Ridge Packaging includes an inner package (shown sealed) and an outer tray (with the Tyvek lid pulled back). 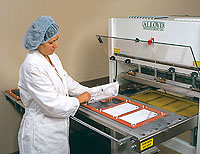 The sealed inner tray holding Remington's vascular introducer set is manually placed into the outer tray, which is sealed by machine.

The new package, designed and made by Blue Ridge Packaging of Simpsonville, SC, includes inner and outer trays. The inner thermoformed tray, made of 25-mil clear vinyl Pentamed MD 557-00-16200 from Klöckner Pentaplast of America (Gordonsville, VA), includes compartments for each of the elements of the introducer set (dilator, sheath, guidewire, needle, and syringe) and is sealed with a Tyvek lid. The outside rectangular vinyl tray is also thermoformed and sealed with Tyvek. After the inner tray is sealed in the outer tray, the package is EtO-sterilized.

A specialist in packaging for medical and electronics applications, Blue Ridge also designed the original single-blister package, using Klöckner's 30-mil blue-tinted Pentamed PETG film. The decision to switch materials and downgauge was one of the keys to the new double-blister design. Both the old material and the new offer advantages, notes Larry Richards, Blue Ridge's designer. Blue-tint polyester makes it easier to visually check for breaks in the seal, but Remington wanted a stronger package than it had used in the past. "Vinyl can be downgauged and still be stronger than polyester," Richards explains. "Also, the double package costs considerably more than the single tray, so moving to vinyl helped to make this more-expensive package a bit less so."

During deliberations on what type of package to use, cost considerations took a back seat to market research showing that the new package design would be a hit with the nurses and technicians who would be handling it, according to Don Rosvald, president of Remington. Why? "It's simply a better package that is easier to open and more likely to maintain sterility," Rosvald says.

And so, in a sense, the package became the product. Remington's vascular introducers are very similar to those of its competitors, Rosvald notes, but no one else is using a double-blister package. "We had to differentiate ourselves," he says.

In the old single-blister package, the elements of the introducer set were locked in place so that when the lid was removed, the parts wouldn't fall out if the tray were turned upside down. This arrangement was supposed to be safe from the standpoint of sterility, but it meant that a nurse or technician had to handle each item, which was a hassle and actually increased the likelihood that the introducer set would be contaminated.

When the items are sealed in the new double package, a nonsterile circulator nurse can open the outer package. Then a scrub nurse in a sterile field puts the inner package on a back table and removes the lid. No one has to unlock the items from the tray. Instead, the tray is simply inverted on the sterile surface and the items are ready to use.

"We've had excellent feedback from nurses and technicians about the ease of use of our new package," Rosvald reports.

Besides being easier to use, the new package was also easier to design than its predecessor. In designing the single blister, the Blue Ridge designers first had to figure out how to fit all the items in as small a space as possible. Then they designed the tabs, ribs, and taper locks that were supposed to hold all the introducer items in position but not make things too difficult for the nurses who had to remove the items.

By contrast, the new package is a "pretty vanilla" creation, says Richards, the Blue Ridge designer. He and his colleagues lowered the ceiling of the inner package so that the Tyvek lid would hold the introducer items in their compartments without the locking components. Minimizing head space was also a primary concern in the design of the outer package, as was preventing the inner tray from riding up on the lip of the outer tray and interfering with its seal. To solve the latter problem, a 2- to 3-degree backdraft was designed into the thermoforming molds. This causes the flanges of the outer tray to turn down, which ensures that the inner tray can't ride up.

"At one point I even suggested that we thermoform in some grooves that would lock the inner tray into the outer tray," says Richards. "But Don [Rosvald] was adamant about getting rid of any locking mechanisms to keep the package easy to open and handle."

The merits of the new package aside, is this ultimately a story about a company that made too big a fuss about a relatively small matter? Not in the opinion of Gary Slate, president of Blue Ridge. "It's not like packaging candy," Slate says of the Remington project. "If there's a problem with a medical device used for something like heart surgery because of a defective package, you don't get a second chance to get it right. Quality is what counts."