The same digital technology that has been used to improve everyday consumer items such as wristwatches and computers has also been applied to the healthcare industry. In particular, digital technology is being used in ultrasound machines to help them capture clearer real-time images.

The key components in all digital products are an analog-to-digital convertor and a digital-to-analog convertor (DAC). Digital ultrasound technology would not be possible without the use of hundreds of application-specific integrated circuits (ASICs) that conduct these conversions. Since 1991, Clare Micronix Integrated Systems Inc. (Aliso Viejo, CA), a manufacturer of analog and mixed-signal solutions, has been developing digitally synthesized transmitter ASICs for General Electric, a manufacturer of ultrasound systems. Using Clare Micronix ASICs, GE was able to develop the LOGIQ 700 MR, the first fully digital 128-receive-channel digitally encoded ultrasound system. 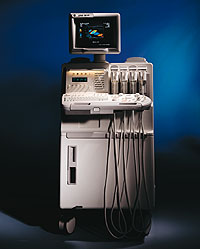 In conventional systems, deep ultrasound penetration often means decreased resolution. To resolve this problem, "There were three primary functions GE needed on the chip," says Craig Stodart, a senior design engineer at Clare Micronix. GE needed the chip to operate at very high speeds of 10 nanoseconds, they needed a high-power chip, one that could produce a 12-V, 0.1-A pulse, and they needed a chip that was programmable. "These functions would allow GE to continuously modulate both the amplitude and the timing of the pulse being sent to the transducer to produce the ultrasound signal they wanted," Stodart says.

The result was the P5 transducer driver pulser chip. "Our chip is a mixed-signal chip—it has both analog and digital functions. The digital portion allows the chip to communicate with the channels in the ultrasound system, while the analog portion acts as the interface between the chip and the transducer sensor," Stodart explains. "The chip converts a set of image input values into controlled current pulses and sends them out to the ultrasound transducer." 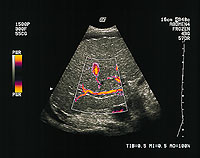 The ultrasound energy is controlled by applying time delays to each element of a multiple-element transducer. The sound waves, or signals, from the various elements must be delayed so that they all arrive at the focal point at the same moment. A similar beam formation must be done on reception. The precision with which all of these delays are done—whether on transmission or reception—determines the precision with which focusing can be done. Any miscalibration of the delays will result in image artifact.

"In the old systems, the only control you had over the transmitter was to turn it on and off," says Greg Lillegard, lead design engineer at GE. "These [P5] chips, instead of just allowing us to have on-off sort of controls, give us detailed control over the signal."

Prior to digital ultrasound, the returning electrical pulses were coordinated with analog circuitry, with a great deal of signal processing occurring before the image had been digitized. In the new ultrasound systems, a digital beam former digitizes the acoustic signal returning from the tissue immediately, before the time delays occur, so that the time delays and the summation that follow it can be done with digital electronics.

Digitizing the signal this early in the imaging chain helps guarantee signal integrity, permits much greater precision shaping the ultrasound beam, and gives the system a great deal of flexibility, allowing reprogramming of the size, shape, direction, and intensity of the beam.

Each P5 chip in the LOGIQ 700 ultrasound system drives two channels. Each channel, which consists of a transmitter and a receiver, can be thought of as a tiny separate system providing data on a single location in the body, Lillegard says.

The ASIC Clare designed for GE can operate at speeds of 10 nanoseconds and produce a 12-V, 0.1-A pulse.

In order to provide larger-aperture images with uniform depth of field, more transmit-and-receive channels were necessary, as were the flexibility and speed to generate multiple focal zones that could be varied over depth while keeping the image focus uniform. "ASICs allow us to have more channels, and more channels give you a higher-fidelity image," Lillegard says. As a comparison, older ultrasound systems have 48 to 128 channels, whereas the new systems have 1024 acquisition channels.

For Clare Micronix engineers, the first step in designing the chip was to choose a process that would allow them to create an integrated circuit. "The process we chose was a 12-V, 4-GHz complementary IC process," Stodart says. Each chip contains a timing-control circuit, a high-power driver, which drives the pulse out to the ultrasound sensor, and a high-speed DAC.

Without the use of ASICs that combine several functions on one chip, such technology would not be possible because the number of chips needed to drive the machinery would be too cumbersome, Stodart says. "The idea behind the P5 transducer driver pulser chip was to take as much functionality as possible and put it on one chip," he says.

As for the future, Lillegard notes, "As more processing capability is built into systems, there will be more and more channels, and ASIC technology will continue to provide us with the capability to improve the ultrasound image."