Debrider Has a Nose for Bacteria 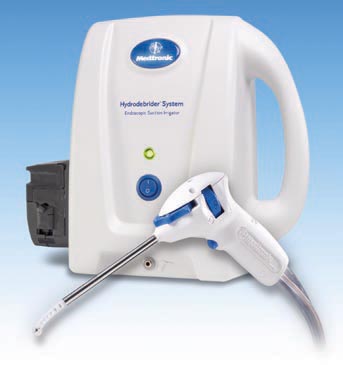 Some 30 million adults in the United States suffer from chronic sinus infections or sinusitis, the initial causes of which are usually bacteria or anatomical problems. While functional endoscopic sinus surgery (FESS) is often used to remove bacteria and correct anatomical obstructions, from 10 to 25% of these surgeries do not cure patients of the recurrent disease because bacteria can be difficult to remove from sinus cavities.

With its handheld Hydrodebrider endoscopic suction irrigator system, Medtronic ENT (Jacksonville, FL) aims to provide surgeons with a power-washing instrument that directly irrigates all surfaces of the paranasal sinuses with pressurized saline to remove bacteria. "Due to the unique anatomical structure of the sinuses, this is no simple feat," says Bryan Jones, associate product manager at Medtronic ENT. "The sinuses tend to be very narrow, and surgeons must make 'U-turns' during endoscopic surgery to reach all the relevant anatomy."

Undeterred by morphological roadblocks, the Hydrodebrider features a pump that supplies pressurized saline at 4 to 6 ml/sec through a tip that produces a fan-shaped spray. This spray can be rotated using a thumb wheel, enabling the surgeon to achieve a spread of 360°. In addition, the distal tip can be articulated up to 270°, enabling the surgeon to spray difficult-to-reach anatomical features such as the medial wall and floor of the maxillary sinus. "A common analogy would be a device that enables you to reach around a wall and power wash the dirt sticking to the other side of it," Jones says.

To develop the irrigation device, Medtronic ENT partnered with Metaphase Design Group (St. Louis), which identified clinicians' usability needs and established an industrial design language that was consistent with the brand architecture Metaphase had established for the design of other Medtronic ENT products.

"Initially, we developed conceptual designs for the Hydrodebrider using Medtronic's engineering CAD files as underlays," remarks Bryce Rutter, founder and CEO of Metaphase. "From this conceptual exploration, the Medtronic-Metaphase team down-selected to a 'best' final design direction and continued codevelopment to ensure that engineering, ergonomic, and industrial design elements were optimized for the overall outcome of the product." Throughout this development process, the two companies used several stereolithography rapid models for real-time testing and evaluation.

"Sinus surgeons have significant ergonomic issues," Jones comments. "They hold an endoscope in one hand while manipulating instrumentation in the other, all while working within the confines of one or two small nostrils. Unfortunately, ergonomic design is not a primary focus of many companies that create products for these surgeons." In contrast, Metaphase's team includes experts in hand function, kinesiology, cognitive and physical ergonomics, physical therapy, human behavior, and industrial design--a crucial skill set for developing such ENT devices as the Hydrodebrider.

Metaphase brought this skill set to bear in addressing a host of ergonomic and design challenges. "Critically important to the success of this handpiece was developing controls that were obvious, explicit in functionality, and intuitive," Rutter says. "Our hand and ergonomics experts designed controls that cognitively map the functionality of the design element being controlled." Designers also considered the hand-size differences between men and women. "The difference between a small fifth-percentile female hand and a large 95th-percentile male hand can be as much as 2 inches in length and 1.25 inches in width," Rutter explains. "We designed the handpiece grip topology to accommodate this variability without sacrificing comfort and precision for both male and female sinus surgeons."

Medtronic has worked closely with Metaphase on several previous projects, Jones notes. "Considering how difficult it is to control spray power, rotation, and tip articulation all with one hand, hearing surgeons say that the system 'feels right' indicates that Metaphase has done its job."