Reducing machine setup time while attaining cost-effective production, accuracy, and ease of operation were the primary goals of the Hamilton Co. (Reno, NV) when it sought to acquire machining systems to produce high-precision components for its fluid-measuring products. Specifically, the firm was seeking equipment to machine components for its precision pipettes and positive-displacement syringes. The systems that Hamilton selected have paid off with a dramatic reduction in setup time—from 18 hours down to between 2 and 4 hours—and have eliminated the need for secondary part finishing.

Hamilton recently introduced the Softgrip Precision pipette, a liquid-transfer device that requires precise mating of a stainless-steel piston with a spring-loaded shaft, as well as a nearly zero-tolerance fit within a Teflon seal to maintain sampling accuracy and precision. 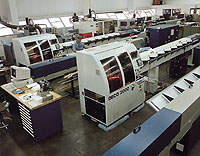 The syringes are used for accurate liquid dispensing in DNA testing and gas and liquid chromatography, as well as for chemical mixing and adhesive dispensing. The company's syringes require tiny Teflon ferrules to seal removable needles into the stainless-steel housings glued to the syringe bodies. Hamilton engineers specified Teflon for the ferrules because the syringes must be inert to the constituents drawn into them. However, machining the Teflon presents technical challenges because of the abrasive nature of the material and its flexibility.

To produce the tiny ferrules and accurate pistons, Hamilton purchased three Tornos-Bechler (Tornos Technologies U.S. Corp., Brookfield, CT) DECO 2000 single-spindle Swiss automatic systems. The DECO systems run at cycle times that rival camshaft-driven machines, producing exceedingly close tolerances on the steel parts and eliminating hours of Teflon deburring. "We took a bit of a risk in buying the first Tornos DECO 2000s in this country in 1996," says Randy Barron, a manufacturing engineer for Hamilton. "New cutting tools and workpiece materials for higher and higher rpm are in constant development, but we knew the DECOs operated up to 16,000 rpm. We were certain the system had a platform robust enough in terms of rpm to take almost any new tooling and material. That's particularly important since we try to retain machine tools for their useful life."

The Hamilton manufacturing engineers adjusted to programming the DECOs using Tornos's proprietary TB-DECO software, which runs in Windows 95 on any 486 DX2/66 or faster PC. Some programming is done on a DECO-dedicated PC on the manufacturing floor, but to save time, Barron and the NC programmer sometimes program the systems from their office PCs while the equipment is running.

Barron says that the Hamilton staff has become very comfortable with the program's user-friendly design. "They can make changes much more quickly on the PC. They know exactly which tables to change. They can just click an icon in the program instead of searching through all the program lines," Barron says.

The NC program created on a PC is transferred directly to the DECO controls. Using an RS-232 link, programmers can run a direct transfer from the programming office to the system, notes Tom Dierks, president of Tornos. Users can also obtain a step-by-step, interactive programming course on a CD-ROM from Tornos to learn how to use all the system's features.

To attain the high productivity of camshaft-controlled automatic systems, the program calculates axis paths and stores them on tables, creating "virtual cams" synchronized by the internal time clock—the "virtual camshaft." The measuring unit of the virtual camshaft is milliseconds and not degrees, replacing the usual 360° angular limits of actual camshafts with nearly infinite units within the program's calculations. 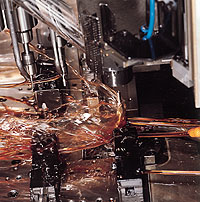 A stainless-steel pipette piston emerges from the oil bath of the DECO 2000.

Because the program controls each table independently, enabling parallel processing, Tornos refers to the technology as parallel numerical control (PNC). The ability to direct simultaneous operations for each DECO's spindles and nine axes also gives Hamilton an edge over camshaft machines for producing a number of small precision parts.

When the first DECO unit arrived, Barron employed it to produce Teflon ferrules, which Hamilton manufactures in annual volumes exceeding 100,000 pieces. Barron chose to use 0.25-in. PTFE Teflon bar stock to run the 0.125-in.-diam ferrules to prevent the soft material from bunching up in the bar feeder "like a rope being pushed," as he describes it. The DECO program first faces the front of the stock, then center-drills it before drilling the 0.0068-in. shaft hole with the end-working attachment.

"The DECO system's small-tool capability allowed the use of a tiny drill with a shank of only 0.009 in.," Barron says. "Because the tooling is so close to the spindle, it's suitable for running our small parts." When producing other ferrules for the same syringe family, Barron needs only to change the diameter of the drill and modify two or three lines of the NC code specific to that operation.

Although Teflon is soft, it wears tools almost like stainless steel does, Barron notes. For this reason, the system's automatic tool corrector feature is a distinct advantage for Hamilton. Operators can adjust the tool correctors from the control panel while the machine is running. In addition, with this electronic control, operators can manually run the program forward or backward with a virtual handwheel function.

Currently the DECOs deliver two ferrules per minute. Barron anticipates that by changing the program and bar-feed tube, Hamilton engineers can use a higher rpm, thereby increasing surface speeds and ultimately increasing productivity.

By acquiring the DECO systems, Hamilton realized additional efficiencies. Each system's counter spindle is programmed to pick off each part and drop it into a finished-part bin, rather than "our having to pick through a rat's nest of chips to retrieve the parts," Barron says. This feature saved the company about 44 hours of deburring time on the initial run of 6000 ferrules.

In addition to machining the Teflon ferrules, Hamilton also employs the DECO systems to produce stainless-steel pipette pistons. The pipette relies on the 0.0005-in. tolerance of the piston, and its exact relationship to the lead of the threaded shaft, for proper performance. The 1.8-in.-long part is machined to a 0.375-in. diam plus 0.002–0.004 in. of excess material for a subsequent centerless-grinding operation.

Once the stock is faced and the OD turned, the workpiece is center-drilled, shaft-drilled, and rough ID-tapered with a form tool. The final 5°, 56-minute taper is generated with a very small boring bar, which is also used for the fine surface-finish requirement. Then a 2-56UNC-2B thread is tapped at the bottom of the taper. All features are on a common centerline, so there is minimal runout. The part's current cycle time is about 90 seconds for a run of 4200 parts.

The pipette is part of a family of products for which "we're only changing the PNC program from setup to setup, and perhaps modifying bar-stock sizes. All of the tooling is the same, so setups require about 2 hours for the family of parts, including first-article QC signoff, which is about 4 to 6 hours for a unique or new part," Barron says.

Because product performance, accuracy, and production capabilities are vital to the Hamilton Co., investment in the DECO 2000s was made only after considerable research. Since the purchase, Hamilton's manufacture of small parts has taken a big step forward. How much further the company will take Tornos Technologies' PNC programming remains to be seen, but as with the virtual camshafts, the variations appear to be limitless.