Can This Spinal Fusion Technology Rise from the Ashes? 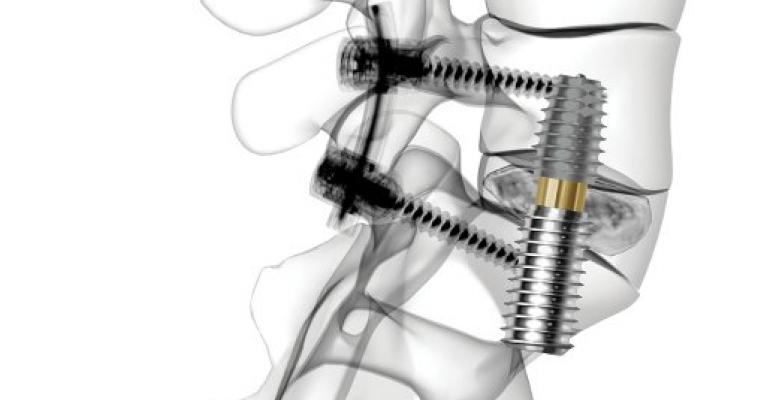 AxiaLIF initially fell victim to coding woes and scandal, but a new group of investors believes the spinal fusion technology is worth fighting for.

A group of investors led by a Denver patent attorney is working to bring new life to AxiaLIF, a spinal fusion technology hampered by coding woes and nearly torpedoed by scandal.

AxiaLIF, short for axial lumbar interbody fusion, was designed to provide presacral access to the L5-S1 vertebrae with minimal risk to nerves, blood vessels, and muscles.

Here’s how it works: The surgeon accesses the lower back through an approximately one-inch incision next to the tailbone, removes the center of the degenerated disc, and inserts bone-growth material in its place to fuse the spine over time. The AxiaLIF implant is inserted to stabilize the vertebrae while fusion is occurring.

TranS1, the originator of AxiaLIF, won 510(k) clearance for the system in 2005 but failed to gain coverage from CMS and many private insurers. Its troubles deepened when the U.S. Department of Justice subpoenaed the company in October 2011. The government said the company allegedly influenced providers to submit claims to federal insurance programs using incorrect diagnosis or procedure codes, leading to kickbacks for some surgeons.

TranS1 merged with and took on the name of Baxano Surgical Inc. in May 2013. One month later, it settled the federal case for $6 million while admitting no wrongdoing. Medicare had begun covering the surgical procedure for implanting AxiaLIF in 2013, but publicly traded Baxano Surgical filed for Chapter 11 bankruptcy protection in November 2014 and went out of business in August 2015.

The combination of Medicare coverage and the “incredible value” that he saw in the patents related to the core AxiaLIF technology propelled attorney Jeffrey Schell and his group to pluck AxiaLIF out of Baxano’s bankruptcy assets for $860,000. They restructured TranS1 under new ownership (Quandary Medical) and set about reviving its sales and manufacturing networks and trying to win coverage for the procedure from private insurers. They began selling AxiaLIF in February 2015.

“We essentially reinitiated the supply chain of the original Trans1 and we’ve successfully reengaged the component manufacturers and packaging resources and logistical network, both in terms of warehousing and sales force, to make sure that AxiaLIF is well supported,” Schell said.

That process took about six months, and involved hiring some original TranS1 employees, including engineer Brandon Arthurs and VP of sales John Miller.

“Both of them reached out to us,” Schell said. “When they heard that we were trying to reestablish TranS1, they wanted to be a part of it.”

The company also brought back former customer service director Laura Howard, whose experience working with hospitals, surgeons, and the sales force helped the new TranS1 grow more quickly than it might have otherwise, he added.

The company has an engineering support team of 20 in Denver, plus about 50 salespeople spread around the United States and a distributorship in Europe, Schell noted. TranS1 is also working to make AxiaLIF available in Japan and China.

TranS1 has now switched from reestablishing the supply chain to building upon the technology, according to Schell. Among the assets it purchased from Baxano was a balloon-assisted device to move the bowel out of the way during the spinal procedure to prevent perforation, a risk the company acknowledges. FDA lists more than 80 adverse events associated with AxiaLIF, mostly related to bowel perforation.

Schell described the company’s R&D as “very aggressive” and said it had filed more than 25 patent applications in 2015.

There are a couple of other things that Schell wants prospective customers to know. First is that a 2014 study of the AxiaLIF procedure showed that it costs an average of $3500 less than other spinal fusion procedures and yields shorter hospital stays, lower hospital readmission rates, and quicker returns to work for patients, he noted.

Second, the new TranS1 has nothing to do with the company that got into trouble with the federal government, Schell added. Its first hire was an attorney to oversee compliance.

“Our focus is making sure that we establish a compliant environment in our company,” Schell said.

Another focus is winning coverage from more than a handful of commercial insurers for the procedure for implanting AxiaLIF. Having worked with spine surgeons seeking coverage for a different procedure, Schell said he brings an understanding of what insurers want in the procedures they cover.

“We’re in a really advantageous position,” he said.

Nancy Crotti is a freelance contributor to MD+DI. Reach her at [email protected]

Correction: An earlier version of this story incorrectly stated that AxiaLIF received 510(k) clearance in 2008. The product was actually cleared in 2005.