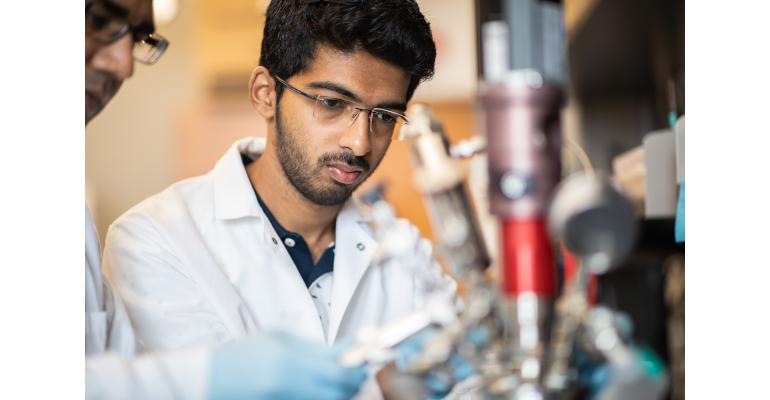 Akhilesh Gaharwar and graduate student Kaivalya Deo designed a hydrogel ink that is highly biocompatible and electrically conductive.
A novel hydrogel combines electronic conductivity with biocompatibility for the design of integrated devices.

A new bioink mimics conductive human tissue for the development of wearable technology that is more compatible with the human body, paving the way for novel “integrated” electronics applications, researchers said.

A team from the lab of Akhilesh Gaharwar, an associate professor in the Department of Biomedical Engineering at Texas A&M University, developed the bioink, which is suitable for 3D printing and leverages a new class of 2D nanomaterials known as molybdenum disulfide, or MoS2.

Flexible electronics have come a long way in the last several years, enabling the designs of wearable devices that integrate sensors, actuators, and other components with other materials that can be worn, ingested, or implanted. However, they still tend to have very different mechanical and biological properties when compared with human tissue, researchers said.

The bioink that the Texas A&M team developed comes as close to creating an ink for printing that mimics the native characteristics of skin, which has the potential to have a significant impact on 3D bioprinting, observed Gaharwar.

“This newly designed hydrogel ink is highly biocompatible and electrically conductive, paving the way for the next generation of wearable and implantable bioelectronics,” he said in an article for Texas A&M Today.

MoS2 has a thin-layered structure with defect centers that make it chemically active. The ink created using the material has shear-thinning properties that decrease in viscosity as force increases. This changes its composition during printing, making it solid inside the tube but flowing more like a liquid when squeezed—similar to ketchup or toothpaste, researchers said.

To make it more conducive to printing, researchers combined the electronically conductive nanomaterials with a modified gelatin, which together forms a hydrogel comparable to the food Jell-O that has characteristics essential for fabricating electronic devices, said Kaivalya Deo, graduate student in the biomedical engineering department.

“These 3D-printed devices are extremely elastomeric and can be compressed, bent, or twisted without breaking,” he said in the article. “In addition, these devices are electronically active, enabling them to monitor dynamic human motion and paving the way for continuous motion monitoring.”

To print using the ink, the team designed its own open-source, multi-head 3D bioprinter that is completely customizable and runs on open-source tools and freeware, researchers said. By developing their own machine to demonstrate their research, the team also aims to create an ecosystem around their invention, allowing other researchers working in the field to build similar 3D bioprinters, they said.

Researchers published a paper on their work in the journal ACS Nano. They demonstrated the viability of the bioink by fabricating electrically active and stretchable electronic devices with superior strain-sensing capabilities in the lab using their custom printer, Deo said.

These devices can be used for engineering customizable monitoring systems, paving the way for novel applications that pair stretchable sensors with integrated microelectronic components, Deo said.

Another potential application of the bioink is to 3D-print electronic tattoos that can be worn on the skin of patients with Parkinson’s disease to monitor their movements, such as tremors, so doctors can provide better care, researchers said.

And because the ink can create complex 3D circuits and is not limited to two-dimensional designs, researchers have flexibility to use it to build customizable bioelectronics that meet specific application or—in the case of medical devices—patient requirements, they added.