HomeNewsAnne Wojcicki Discusses Future of 23andMe, Consumer Genetics at SXSW
Recent
Medtronic to Spin Renal Business into New Company
May 26, 2022
Why Diversity in Medtech Matters
May 26, 2022
MD&M South Set to Debut in June
May 26, 2022
Stryker Launches EasyFuse Compression System
May 26, 2022 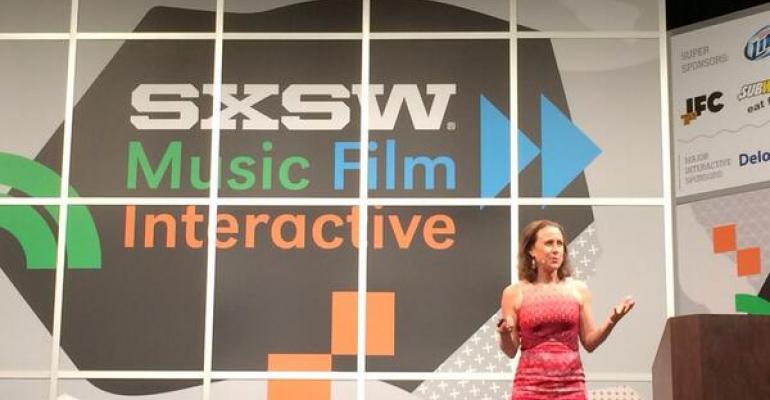 Months after receiving a warning from FDA, 23andMe's CEO delivered a SXSW keynote on company's future and the growing trend of consumer genetics.

“Who here likes the healthcare they receive now?” 23andMe's Anne Wojcicki asked a crowd at her SXSW 2014 keynote. She looked confident the audience would respond as they did, with stone silence peppered with laughter. The CEO was making a firm point – healthcare needs 23andMe.

Five months after being issued a stern warning letter by FDA to cease selling its home genomics kit, 23andMe is still pushing forward. “If I had wanted things easy I could have opened a coffee shop somewhere,” Wojcicki said. Her remarks were meant to echo every part of the company's journey thus far, not just its troubles with FDA. No doubt Wojcicki is confident that history will fall on 23andMe's side as innovation speeds up and consumer demand for useful healthcare data grows. “We got people excited about their genome. People want this information.”
“I know you're loathe to say anything bad about FDA, but I'd like you to if possible,” the moderator told Wojcicki, who remained diplomatic on the issue despite some audience applause at the suggestion.
Wojcicki was very focused on keeping her keynote's focus away from 23andMe's regulatory troubles and more on the potential of consumer genetics testing and the vast potential that has already been offered. She presented several cases of 23andMe customers who were able to gain valuable insight about their health. A doctor discovered a history of blood clots in his family. A father was able to get his son diagnosed as fructose intolerant after finding the associated gene dormant in his own genome. After discovering a susceptibility to celiac disease, an ailing mother was able to have herself and her sick daughter properly diagnosed. A doctor has blogged about his experience with a patient whose 23andMe profile revealed a potentially life-threatening sensitivity to anesthesia.
“While we're stuck, the rest of the world has moved on,” Wojcicki said, both taking a jab at FDA and pointing to a recent article in The New Yorker highlighting China's Beijing Genomics Institute (now called B.G.I), the world’s largest genetic-research center.
The keynote felt as carefully orchestrated and unique as a DNA sequence - simultaneously praising of the efficacy and efficiency of 23andMe's technology and condemning of FDA's shortsightedness toward a technology that can improve healthcare and lessen costs. One such moment came when Wojcicki recounted to the audience an instance where a colleague went for a genomics test at a standard clinic and was stuck with a roughly $1400 bill. 23andMe's test gives the same data for $99.
But sometimes you put together all those DNA strands and what you're left with is an elephant sitting in a room. While many have already taken 23andMe's side against FDA it was obvious that everyone really wanted to hear from the CEO herself.
Wojcicki adopted a tone not at all bitter about the agency's actions, but more empathetic of an organization charged with keeping regulation at the pace of innovation. “FDA serves a good purpose, to protect public health, and I think there's a real question about all this genetic information that's coming out and what is the right way to regulate it.” she said. “It's really new. If you think of FDA timelines its new how quickly [genome testing] has suddenly gone from this academic landscape to where there's a $1000 genome.”
She said that 23andMe currently plans to follow either a PMA or 510(k) toward FDA approval but added that there has also been a lot interest in changing FDA guidelines to be more accommodating of genetic data. “I think [FDA is] still figuring out what is going to be the right way to regulate [genome testing] en masse and I think it's going to take a little bit of time.”
After repeated questioning by the moderator as to how this is all affecting 23andMe's business and bottom line Wojcicki eventually commented, “We've had lot of ups and downs. We just have to have that tenacity to push through it. It's going to take time and money and effort to figure out the path forward.”
In the meantime, the company is still able to leverage the huge database of customer genetic data that it has collected over the years - 650,000 people by Wojcicki's estimation. “We have academics, pharma partners, and countries that are interested in leveraging that opportunity. It's more data than anyone else in the world has.”
-Chris Wiltz, Associate Editor, MD+DI
[email protected]
0 comments
Hide comments
Related