Once the concept and underlying technology of a new medical product has been worked out, developing a user-interface prototype can be costly and time-consuming. This was the problem facing Indigo Medical (Palo Alto, CA). After designing a urological surgery laser, the company wanted to know what the interface would be like to use, but did not want to build an expensive prototype.

At the time of the product's development, Indigo was a start-up company with a tight design and development budget. In order to minimize overhead costs, the company hired San Francisco—based Bridge Design to handle some of its outsourced design and development efforts. With a goal of bringing the product to market quickly, the two companies worked together to develop a new design tool. Using multimedia and graphics software, the tool creates animated versions of a product's controls and of its display, while also showing the effects of these controls on the procedure or diagnostic technique. 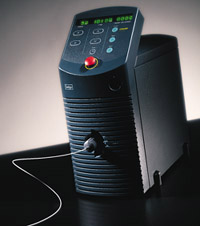 "The increasing sophistication of today's product features is often accompanied by large software overhead," explains Horst Adam, former president of Indigo Medical. "That's why it was important to test out ideas with simple tools, such as Bridge Design's multimedia device, before committing to more costly and highly regulated final software."

Bridge Design president Bill Evans says, "Potential users were not interested in reading the usual dry interface specifications. They needed to focus on how the product could help them do their jobs better."

The demo that was developed for Indigo can be viewed on Bridge Design's Web site (http://www.bridgedesign.com). The urological surgery device delivers a laser to a fiber tip. During operation of the controls, the view through the endoscope is animated. A marker aiming beam flashes during setup. When the laser is fired, the beam comes on continuously. This is all done by simple animation of a fiber top with and without a red glow surrounding it. The software in the demo simply switches the view back and forth to give the impression of certain functions. A third area shows the operation of a footswitch, and animation shows it being depressed, with the main controls responding accordingly.

Demos developed by Bridge Design offer many benefits, including the opportunity to test whether users will like the planned features. They can also be expanded to include a competitor comparison. Demos are self-running, require only a color laptop, and are easy to distribute on floppy disk, CD-ROM, or over the Internet.

This multimedia tool had important benefits for Indigo's design process. As explained by Adam, it confirmed the functioning of the interface of complex products early in the design cycle—before big commitments to hardware and software were made. It also gave engineers a tight specification from which to write software, design hardware, and expose minor bugs. And, once the product was ready for market, the demo could be used as a sales tool that highlights the product's features, or it could be used to train users.