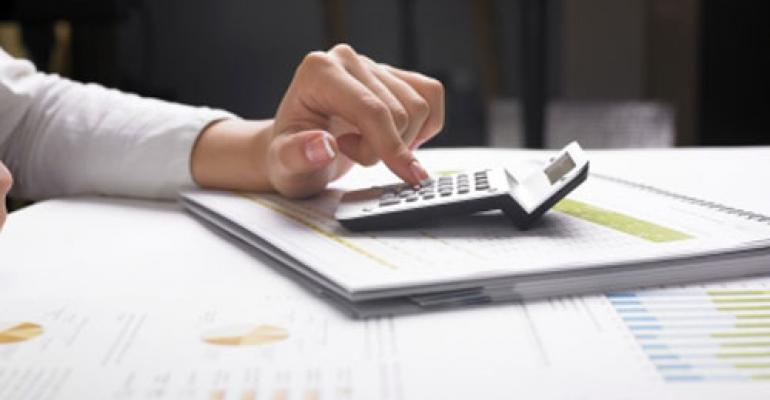 Applying Moneyball-style statistical analysis to FDA data yields important insights about the most common pathway to market for medical devices.

By Jeffrey N. Gibbs, Allyson B. Mullen, and Melissa Walker

The majority of new medical devices reviewed by FDA enter the market via the 510(k) process. In 2013, FDA cleared approximately 140 510(k)s for every original PMA application approved.

For most medical device companies, it is critical to understand the 510(k) process, evaluate the likelihood of success, and maximize the odds of obtaining clearance. In particular, companies must answer two commercially critical questions:

As mandated by MDUFA III, FDA calculates and publishes some 510(k) statistics that help make these predictions, including average time to decision and the percent of 510(k)s with additional information requests. These documents provide high-level data on key metrics for a particular fiscal year, but a major limitation is that the calculation of averages will mask product-specific or classification-specific variations. However, the agency has also released information-rich databases that enable far more probing analyses than were previously available. These databases can help companies identify trends that affect timing and odds, and, perhaps, help companies improve the chances of a successful 510(k).

In the book Moneyball, author Michael Lewis explained how the Oakland Athletics exploited new insights derived from statistics to gain an edge in baseball. In the intervening years, baseball sabermetricians have developed esoteric statistics, such as wins above replacement (WAR), that most fans do not understand but which are considered more meaningful indications of a player’s value than runs batted in or batting average. The sabermetricians now have new, more comprehensive data sources available, allowing for yet more refined analysis.1

While 510(k)s and baseball may seem to have little in common (except for the authors’ keen interest in both), they share a common trait: New analytical tools can yield useful insights. In that spirit, we have analyzed the 510(k) program in a new light. Using SOFIE, Graematter Inc.’s Regulatory Intelligence System, we analyzed various 510(k) metrics from FDA’s publicly available 510(k) Premarket Notification Database during the five-year period from 2008 to 2012 to gain insights about this primary pathway to market for medical devices.

During calendar years 2008 through 2012, FDA cleared approximately 3027 510(k)s per year. The total number and type of 510(k)s (e.g., traditional and special) has remained generally consistent across this five-year period. 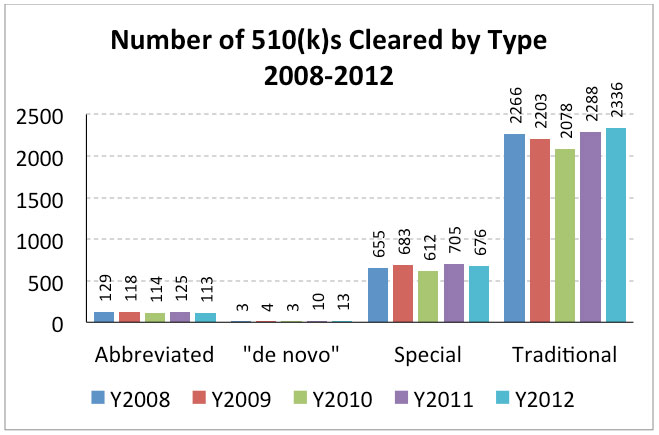 The vast majority of 510(k) submissions between 2008 and 2012 were submitted directly to FDA for review. On November 21, 1998, FDA began accepting 510(k) reviews from accredited persons.3   This program has had limited use because only select devices are eligible, and companies have reported mixed experiences with their accredited persons. However, recent data show that the effective rate for the third-party 510(k) review process has steadily declined (from 16% in 2008 to 9% in 2012). There have not been any recent changes to this program, so this decrease appears to be attributable to industry’s disuse—perhaps due to lack of interest, dissatisfaction with the program, and added expense—rather than agency policy.

The seemingly forgotten third-party review program may be an area of interest for industry to explore to try to decrease review times for eligible device types. However, it is worth noting that third-party-reviewed 510(k)s have seen longer review times by FDA, increasing from 46 days with FDA after the third-party has reviewed the submission in 2008 to 62 days in 2012. We have no way of knowing how long the third party took to review the submission (or the quality of the review) before making its recommendation to FDA, but these average review times all appear to be in excess of the 30 days FDA is allowed to make its decision after receiving the third party’s recommendation under Section 523 the Federal Food, Drug, and Cosmetic Act.

In addition to the overall increase in review time in 2010, the average review times for abbreviated and traditional 510(k)s are essentially the same, with abbreviated 510(k)s actually taking the same amount of time or longer on average than traditional 510(k)s in all years except 2011. This data is particularly curious because when the abbreviated 510(k) was introduced in 1998, the goal was, in part, “to streamlin[e] the review of 510(k)s through a reliance on a ‘summary report’ outlining adherence to relevant guidance documents.”4   While abbreviated 510(k)s may offer advantages in terms of cost and time to prepare, the projected advantage in review times was not realized in this five-year period.

There are no apparent patterns in terms of the number of submissions cleared within and the number of device types (or product codes) assigned to each specialty. But there is a strong pattern in the medical specialties with the highest average number of review days—many of them relate to in vitro diagnostic devices (IVDs). The four medical specialties with the longest average 510(k) review times between 2008 and 2012 were pathology, physical medicine, immunology, and hematology (in decreasing order). 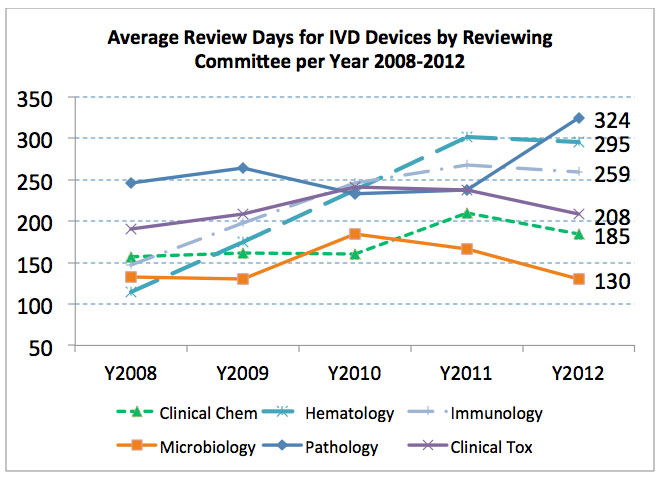 There could be a number of factors behind the longer review times for IVDs, e.g., more new types of devices, more IVDs supported by clinical data, evolving regulatory expectations, etc. The data show, though, that IVD companies should expect longer review times on average than non-IVDs.

This data is particularly relevant because FDA recently proposed imposing premarket review for Laboratory Developed Tests (LDTs), with a few narrow exceptions.5   LDTs are currently run at numerous laboratories in the United States. If FDA’s proposal is finalized, these same review divisions that already see significantly higher review times will be faced with an increased workload. Under FDA’s proposal, the initial LDT submissions will be for higher risk products, which presumably will take more reviewer time than more routine, moderate risk IVDs.

Average review times for devices change over time. Review times can change more quickly and dramatically for individual types of devices than across the device program or by reviewing committee, even those that are required most often.

Table 5. The Ten Device Product Codes Cleared Most Frequently between 2008 and 2012

Three of the top 10 product codes saw an increase in their average review times by more than 30 days (the overall 510(k) average), with two product codes, GEI (cutting and coagulation) and DZE (endoscopic implants), seeing increases in excess of 60 days (63 and 79 days, respectively). This pattern is troubling and puzzling. There is no obvious explanation for this trend. With only one exception, there were no device-specific guidance documents issued for these devices between 2008 and 2012. There may have been category-specific events that led to these increases, but this somewhat surprising trend is worth further exploration.

The biggest increase in overall review times between 2005 and 2012 was product code NBW (over-the-counter blood glucose test systems), with an increase in average review time of 157 review days. This increase highlights an important point in our analysis: When there is a safety concern with a particular device type, the review time for the 510(k)s is likely to increase—and in this case, increase significantly. Beginning in early 2010, FDA began considering industry-wide actions to address concerns around the accuracy of blood glucose monitors. FDA clearly changed the requirements for these 510(k)s around that same time when it withdrew the 2006 guidance documents for insulin pump 510(k)s in 2011. This conclusion is reflected in the average review time for an NBW 510(k), which increased by 126 days between 2010 and 2011. 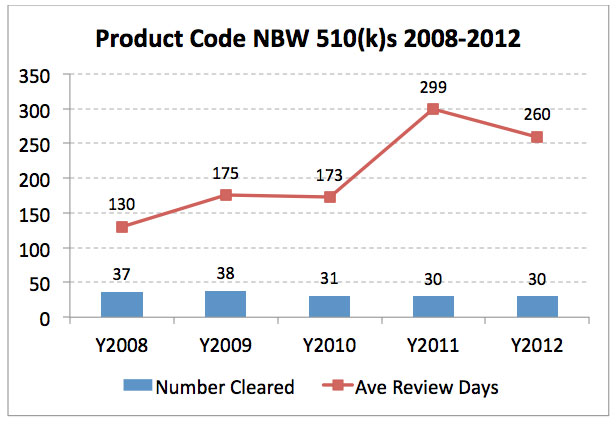 On the other hand, the biggest winner in our 510(k) analysis was product code FRO (wound dressing). This product type saw an average decrease of 32 review days between 2005 and 2012; nearly all of that decrease was observed between 2005 and 2008 because this same product code saw an average increase of two days in its review times (well below the average increase of more than 30 days) between 2008 and 2012. This variability again reminds us that patterns and trends can change significantly.

There are many ways of predicting how long a 510(k) review will take. Both the overall 510(k) program data and understanding how quickly particular types of 510(k)s have been cleared provide useful insight. Companies will want to draw upon multiple, complementary resources.

2. This data is based on the datasets in FDA’s publicly available databases as of August 11, 2014.

Allyson B. Mullen (a Yankees fan) is an associate at Hyman, Phelps & McNamara.