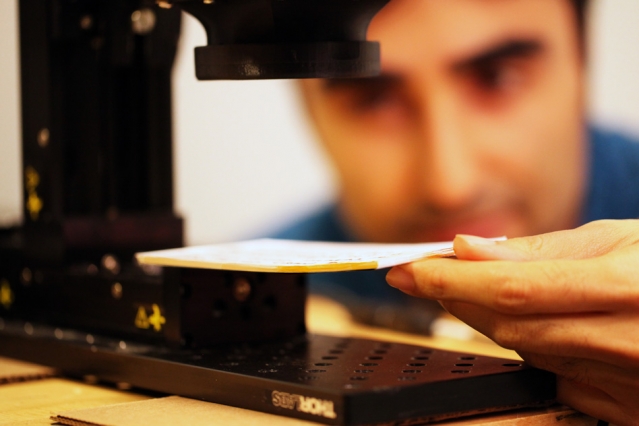 MIT researchers have created a prototype for a new imaging system that has the ability to image and identify the printed pages of a closed book, thanks to a system based on a band of electromagnetic waves known as terahertz radiation. Barmak Heshmat, a research scientist at MIT and one of the corresponding authors on the work, says that terahertz waves have shown real promise when it comes to exploring new imaging techniques.

In their new study, Heshmat and his colleagues explored a range of different frequencies from 100 gigahertz to three terahertz, and found that these waves could penetrate through paper and many other materials. They also have begun sampling these pulses of light with very high time resolution, which can provide enough spatial resolution to separate between different surfaces -- allowing them to image surfaces with unprecedented clarity.

"Such high time resolution provides space resolution of about 20 microns, which is high enough to separate the pages of a closed book," Heshmat says. "We have developed an extended algorithm to enable this modality of imaging to be able to not only image, but also read through densely layered structures. As of now the resolution that is dictated by these frequencies is too coarse to beat any microscopy technique, however we are working to improve that resolution in some future studies. Having said that, because some of the chemicals can show contrast in this frequency range, terahertz radiations could be used to detect specific features of a disease."

Of course this wouldn't be the first attempt at using computational techniques to enhance medical imaging. Earlier this year IBM announced preparations to retool imaging software that could enable its supercomputer Watson to "see" and "read" images to interpret patient data. However, unlike IBM's efforts, Heshmat and his colleagues are working to create a whole new imaging system that can use algorithms that can gauge distance, and help penetrate deeper into surfaces. If the technique proves successful, we could see similar technologies crop up as imaging techniques advance.

"Terahertz technologies have been rising with a steady pace in the last decade," he says. "Terahertz waves are expected to take the lead in future communications where TBit per second channels are needed, and also as a complementary technology in inspection and biomedical imaging. For example, a new terahertz endoscope was demonstrated by a group of Korean researchers five years ago."

As they continue with their research, the group plans to continue exploring the different ways that terahertz waves can be used and exploited in various imaging techniques. Heshmat says that terahertz imaging is still a fairly new technology, and researchers will continue to work to improve the power and accuracy of the radiation sources so they can penetrate even deeper into surfaces.

"Right now we are focused on improving the spatial resolution of these types of systems," he says. "We also want to have a better signal to noise ratio, which is what our colleagues at MIT and around the world are working on."