Home>Markets>Neurological
Recent
FDA Authorizes First Surgical Robot to Help with Transvaginal Hysterectomies
Mar 01, 2021
Combining Microfluidic Chip and Cellphone for Simplified COVID-19 Test
Mar 01, 2021
Could Even More M&A Be on the Way for Hologic?
Mar 01, 2021
Medtech in a Minute: The Robotics Company Formerly Known As TransEnterix, and More
Mar 01, 2021

Will Tibial Neuromodulation Turn the Overactive Bladder Market on Its Head? 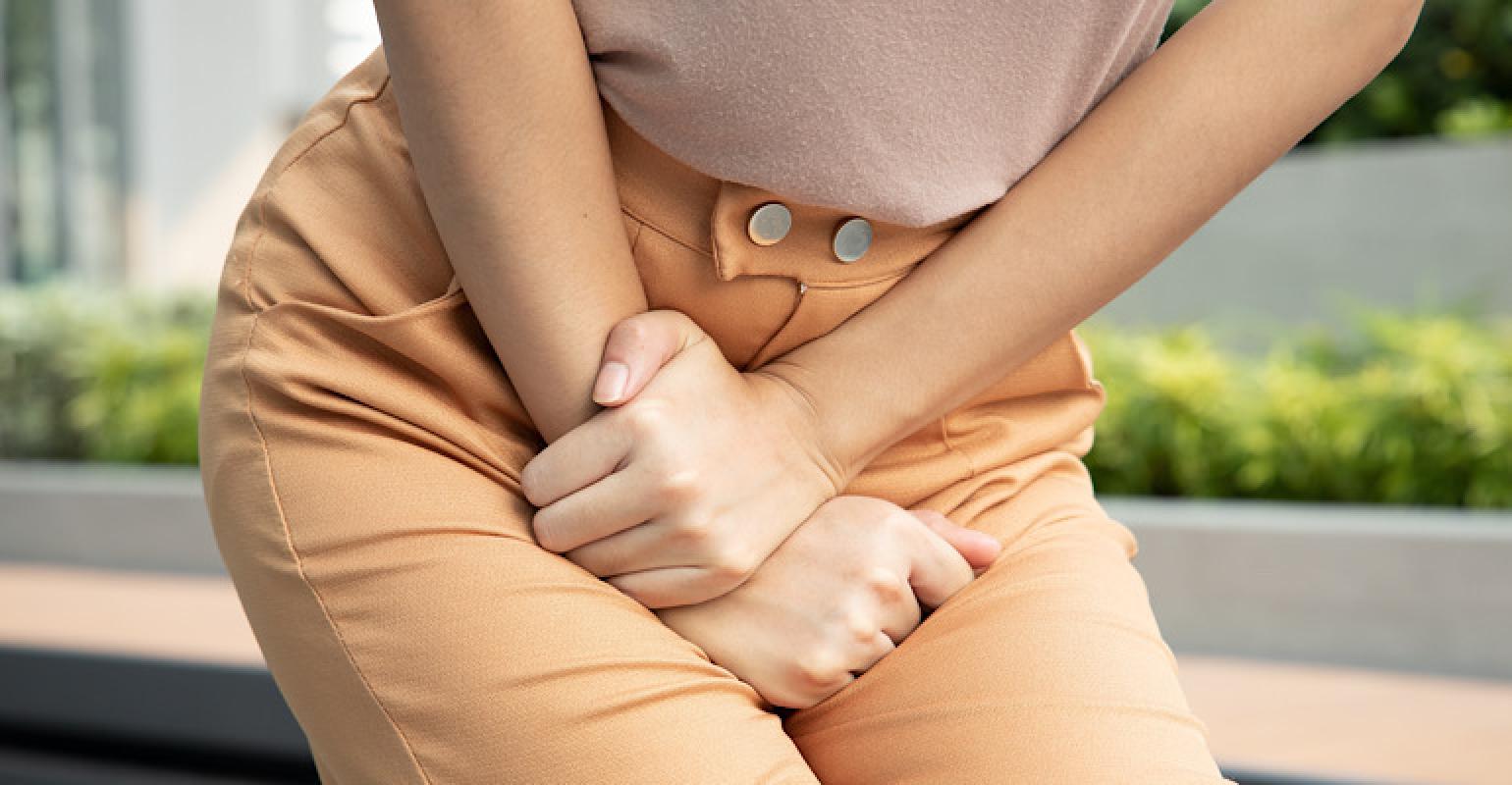 BlueWind Medical has launched a pivotal trial of its Renova iStim implantable tibial neuromodulation system for the treatment of overactive bladder. The device could offer a less invasive alternative to sacral nerve stimulation, a market that Medtronic and Axonics are locked in a heated battle over.

Patients suffering from an overactive bladder are finally feeling seen.

In the past year, new competition in the sacral neuromodulation market has driven innovation in that space, both from incumbent Medtronic and from the challenger, Axonics. Now there's another company looking to tackle overactive bladder, but this newcomer isn't going after the sacral neuromodulation niche. BlueWind Medical is developing a device small enough to be implanted in the ankle that is powered by a wearable, rather than an implantable pacemaker-like device.

Related: Medtronic Ups Its Game in Sacral Neuromodulation for Bowel and Bladder Control

Based in Herzliya, Israel — with U.S. headquarters in Park City, UT — BlueWind Medical recently began enrolling patients in a pivotal study of its Renova iStim implantable tibial neuromodulation system for the treatment of overactive bladder after securing a conditional investigational device exemption from FDA.

BlueWind's tiny, battery-less, lead-less implant was designed to offer overactive bladder patients (primarily women, but the condition does affect about 30% of men) with a more patient-centric, home-based therapy option.

"The overactive bladder market is a really interesting one because it's really not viewed as a disease," CEO Dan Lemaitre told MD+DI. "If you look up overactive bladder it may be classified as an affliction. ... as a consequence, the vast, vast majority of patients are untreated."

The global overactive bladder treatment market is projected to reach $4.19 billion by 2022, according to a Markets and Markets report, but Lemaitre said the market potential is actually much larger than that because so many patients are in the "watchful waiting" camp.

"They've tried behavioral therapy, which means changing liquid intake, not drinking before you go to bed at night if you're leaking at night. They've tried the drugs, but the pharmaceuticals here, if you read the label, they reduce the number of leaks per day relative to the placebos by less than one leak per day, so they don't really have a profound impact, and there's side effects [so] most patients simply don't stay on their pharmaceuticals. If you have failed both behavioral and drug therapy, you are then eligible for third-line therapy."

Today, third-line therapy means sacral neuromodulation — either with Medtronic's system or Axonics' system — or botulinum toxin injection, better known as Botox. With bladder Botox, as it's called, a urologist injects Botox into the patient's bladder in an effort to help the muscles relax, which is thought to give patients more time to get to the bathroom when the need arises. The injections are done in the clinic, and most patients tolerate the injections well, according to Mayo Clinic.

The drawback to bladder Botox, however, is that the treatment results only last about six months, and then additional injections are needed. It is not recommended for men with a risk or history of enlarged prostate, and it comes with the potential side effect of urine retention.

"So about 80% of the patients drop out of Botox therapy after about four years," Lemaitre said.

Sacral neuromodulation is considered the gold standard for third-line therapy, he said, but that therapy requires both a trial lead procedure to see if the patient responds to the therapy using an external device to power the lead, and then a second procedure for the final implant, assuming all goes well during the trial period.

The most obvious drawback to the sacral neuromodulation systems on the market today, as Lemaitre puts it, is "you would have a pacemaker in your butt for the rest of your life."

He also noted that there used to be a problem with leads getting fractured or migrating but improvements in the technology has dramatically reduced the rate of that happening.

"The bottom line here is sacral nerve modulation has been around for over 20 years, and it's probably penetrated 3% of the market. So I think patients have spoken," Lemaitre said. "They don't want to go through that invasive of a procedure ... they don't want to have a pacemaker in their butt, and they're certainly not looking for reinterventions down the road."

So what is the alternative?

"The Chinese figured out thousands of years ago that if you stick a needle in someone's ankle it has an impact on the bladder. You're probably thinking you failed physiology, but you didn't," Lemaitre said. "The reality is, there are signals that run from the tibial up toward the sacrum, and what you're doing with that therapy is basically trying to disrupt these inappropriate signals that the brain is getting from the bladder that says it's full when it's not."

In addition to the InterStim technology, Medtronic offers the Nuro system, which delivers percutaneous tibial neuromodulation (PTNM) to treat overactive bladder. It is an office-based treatment delivered with an external neurostimulator, and Lemaitre, who used to work at Medtronic, said the Nuro system has been proven to work in double-blind studies. The downside of this treatment option, he said, is that it requires weekly doctor visits for 12 consecutive weeks. PTNM has been around for about 10 years, he said, and is implanted in roughly 10,000 to 20,000 patients a year.

"It's just not a form factor that works," he said.

"What we've tried to do is create a tibial nerve stimulation system that is in a form factor that works for patients," Lemaitre said. 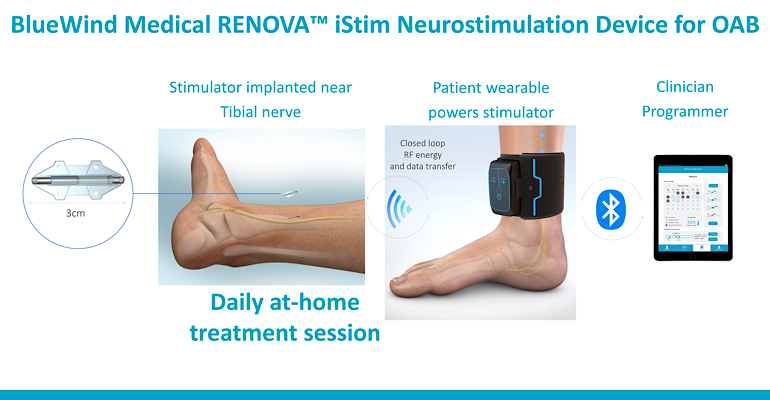 BlueWind's solution involves a small incision in the ankle to implant a 3-cm device that is then sutured in place to prevent the device from migrating. The device is been implanted in more than 70 patients between the company's pilot studies and now its U.S. pivotal study.

To power the device, the patient simply puts a small cuff around their ankle.

"It's really light weight," Lemaitre said. "If I was wearing it right now, I could be walking around, talking to you, [or] I could have my feet up. It's very forgiving in terms of positioning. You do feel the therapy, there's a tingling sensation when it's on, but it's very manageable and it's customized for the patient. You wear it for about 30 minutes a day."

In a commercialized setting patients might only use the device for 30 minutes every other day, or they might wear it every day for a full hour, depending on their individual needs. The system does have a feedback loop which is constantly interrogating the implant to make sure the patient is getting a therapeutic dose of energy so if the cuff isn't absolutely centered over the implant, they'll know to adjust it.

"We believe what we've been able to create here is a device that bridges this gap of patients who either are leery of doing something more invasive like sacral nerve modulation, but don't want to do Botox or are tired of Botox, and really being able to attract the vast majority of patients who are sitting in that watchful waiting camp," Lemaitre said.

What if it doesn't work for all overactive bladder patients?

"We sure don't believe we're doing a science experiment because it's a known mechanism of action, it's been proven to work in a different form factor, ... but let's say it doesn't work in a subset of patients. We've preserved all therapeutic options. You can do Botox, you can go on to do sacral nerve modulation, we can explant the device if people are concerned about having that tiny electrode left in their ankle."

Lemaitre also said the clinicians who have been involved with the company to date "are desperately looking for a solution for patients who simply aren't satisfied with first and second-line therapy and aren't ready for either of the available third-line therapies right now."

BlueWind's goal is to complete enrolment of the 200-patient trial within 18 months. The primary endpoint for the trial is six months, but FDA has asked for 12 months of follow up data to prove the safety and efficacy, especially because it is a single-arm study. It would be difficult to design a double-blind study around this particular therapy, Lemaitre explained, because the patient is able to feel the therapy in action. That puts the company on a trajectory to potentially secure FDA clearance sometime in the first half of 2023, he said.

Cerus Endovascular Breaks Through the Competition with New Designation
Feb 11, 2021