Recording the Brain at Work with Thousands of Sensors 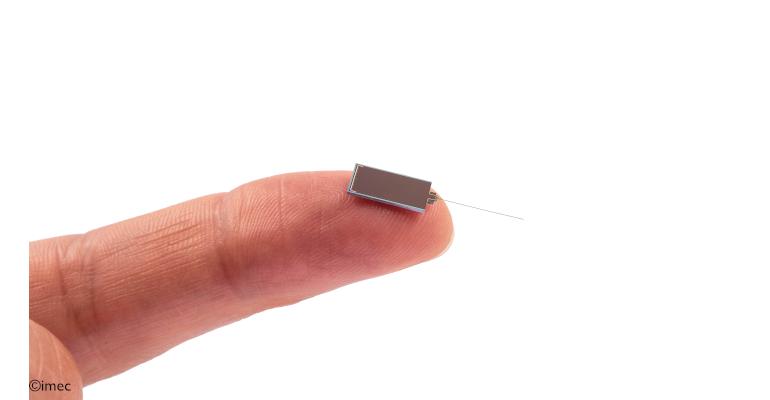 The Neuropixels probes are thinner than a strand of human hair.
The next-generation Neuropixels 2.0 probe can record from more than 5,000 sites in the brain, while minimizing tissue damage.

“How does the brain work?” is a question as old as the brain itself. The brain is composed of billions of neurons and quadrillions of connections between them. Somewhere in this vast and complex network lies the biological basis of learning, memory, behavior, perception, and consciousness. Neurons are specialized brain cells that receive and transmit information using action potentials or small electrical pulses. Eavesdropping on this conversation might give clues as to how the brain works and what happens in brain diseases such as Parkinson’s disease or epilepsy.

Neuroprobes, such as imec’s Neuropixels probe, are small brain implants containing a certain number of electrodes or recording sites (pixels) for recording the electrical signals from neurons. Imec’s Neuropixels probes are currently used in more than 400 labs all over the world. With more than 5,000 recording electrodes spread over four very small surface shanks (70x24 µm2) in the next-generation Neuropixels 2.0 probes, neuroscientists can stably register thousands of neurons from different brain areas over long time periods, while barely causing damage to brain tissue. These neural probes can span multiple brain areas and circuits while providing single-cell resolution. The tools make it possible to interrogate brain circuits, which could lead to a better understanding of the brain itself and brain diseases.

Neural electrophysiologists study electrical brain activity to determine how neuronal disorders arise. For that, it is imperative both to have an overview of different brain areas and to catch the electrical signals from single neurons. Neurons are organized in brain circuits, and these circuits in multiple brain areas collaborate to achieve a task. To understand how the brain fulfills this task, neuroscientists look at which part of the circuit processes the data first, how the information flows, and what role the individual neurons play in the process.

Progress in this area has been slow due to the limitations of existing tools. The patch-clamp technique attaches to one neuron and can measure that activity very reliably but lacks an overview of the network surrounding the neuron. On the other hand, imaging solutions like fMRI focus on larger brain areas but miss the single neuron details. In vivo microscopy images single neurons but lacks access to deep tissue. Neuropixels aims to bridge the gap by providing a solution that is not only highly detailed but also spans a large area, both horizontally and vertically. This high density in recording sites could be compared to the pixels of a camera that form an ‘image’ of the brain.

The first-generation Neuropixels probe that’s now available to the global research community contains 960 electrodes on a 24-by-70 µm thin needle called the shank. The second-generation (Neuropixels 2.0) packs 1,280 electrodes on a single shank and has four shanks! In both versions, this is an order of magnitude greater than any other available neural probes. It enables users to register the electrical footprint of hundreds to thousands of neurons in one session. Moreover, the four-shank Neuropixels 2.0 enables recordings from more than 5,000 sites. This means it can densely sample activity from a 1-by-10 mm plane perpendicular to the brain surface, thereby reaching thousands of neurons. The number of neurons can even be increased by recording from two Neuropixels 2.0 probes simultaneously. Experiments have shown that this is possible with only little damage. That is extremely important as damage to the brain tissue has a detrimental effect on recording performance.

The Neuropixels 2.0 four-shank with its constituent parts.

Implanting a probe inflicts more than direct damage to neurons. Since the probe is a foreign object, it also induces an inflammatory reaction in the body. In response, scar tissue develops around it and blocks the electrical signal from the neurons. Additionally, the constant activation of neuroinflammatory cells secreting neurotoxic factors might create an inhospitable environment for neurons. All of these events combined contribute to a loss of recording signal over time. Clearly, it is essential to minimize damage to the brain, and therefore, implant size is a crucial parameter.

How to Place a Thousand Electrodes on a Thin Needle

The fundamental limit to the number of electrodes that can be simultaneously recorded is the number of wires that can be placed on the shank. For the current Neuropixels probes, a maximum of 384 interconnect lines are routed between the electrodes in the shank and the amplifiers in the base. This means that 384 electrodes selected from the total number of recording sites can be addressed at the same time. A local switch matrix (multiplexer) allows the user the flexibility to choose preferred sites so the brain area of choice can be recorded. The switches can be set again from software in less than one second without any physical manipulation.

This technical feat is made possible on a silicon wafer using advanced CMOS fabrication techniques, with features as small as 130 nm. Even the electrode material TiN is fabricated at wafer scale and is CMOS-compatible. TiN is a new electrode material but has proven to be bio-compatible and stable (i.e., not degrading) over a long period when implanted in the brain. Because the probe is so thin, thinner than a strand of human hair, silicon would start to curl up. Therefore, imec developed a stress compensation technique to prevent the material from bending.

The shank and base of the probe are fabricated as one piece. While the shank holds the recording electrodes, the base contains electronics for filtering, amplification, multiplexing, digitization, and power management. The neuronal signals are pre-processed on the probe's base instead of using external equipment—a so-called “active probe”—that ensures no signal loss occurs when the signal leaves the probe. Because the voltage signals are so small, they need to be amplified and filtered to enhance the relevant voltage signals. Finally, the analog signal is digitized on the probe base, to avoid picking up more noise as it travels through the external cable.

The digital output from all channels is subsequently transmitted to an interface board (or headstage) that can be connected to the recording setup. Aside from the probe, the interface board of Neuropixels 2.0 was also miniaturized to approximately half of the first generation's size. Many of the blocks from the interface board, specifically the blocks to generate supply and reference voltages, were transferred into the base chip to achieve the area reduction. Because the power management is on-chip, the total power consumption of the headstage and probe together is reduced in Neuropixels 2.0 compared to the first generation. 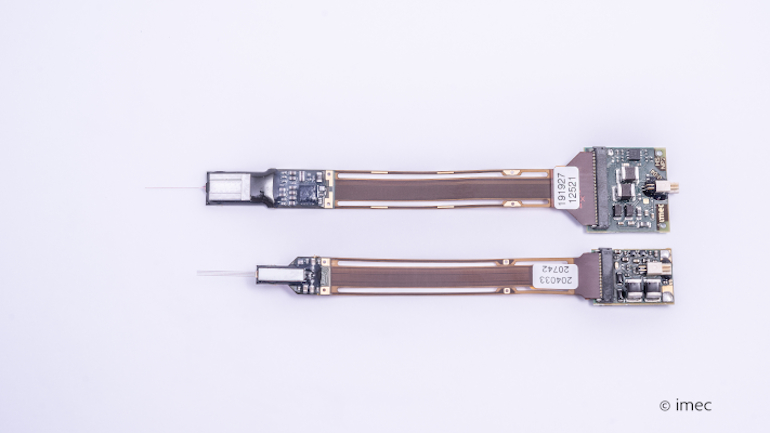 The ultimate aim of chronic recordings is to record from the same neurons over days and weeks for studying the neural basis of processes that evolve over time, such as learning and memory. This goal has been challenging for large populations of neurons because neurons may die over time due to tissue damage or disappear or drift to other electrodes due to brain motion. At that point, identifying them as the same neuron is challenging when electrodes are spaced far apart.

In the Neuropixels 2.0 probes, the introduction of a linear symmetric electrode layout on the probe shank, together with the development of a stabilization algorithm by the Neuropixels neuroscience consortium, allows tracking of identified neurons over weeks despite drift and losing cells. The algorithm performs a post-hoc computational stabilization similar to image registration (when you want to match two images). The design of both the pitch and configuration of the electrodes is crucial for the process to work. Unlike the first generation of probes, Neuropixels 2.0 has a decreased pitch with center-to-center spacing of 15 μm along the vertical dimension, and the electrodes are now vertically aligned in two columns rather than staggered along the shank. Both features ensure that the signal of the same neuron can be captured on adjacent recording sites. The algorithm uses this redundant information to reliably identify and track the same neuron over time. Neuropixels 2.0 has shown stable recordings from the same neurons with high-quality signals for over two months, obtained in six different labs from the consortium. Comparison of the electrode layout in generation 1 (top) and 2 (bottom).

Neuropixels’ success can be credited to the close and unique partnership between imec and the Neuropixels consortium, which includes committed financial funding partners and world leading neuroscientists. The neuroscientific partners gave the design input based on their own experience and took into account the neuroscientific community's needs. After every design step, the consortium thoroughly tests the prototype and provides feedback before the next version of the probe is optimized. Currently, our research partners are evaluating the ‘alpha’ version of the Neuropixels 2.0 probe. The revised ‘beta’ version is scheduled for release to the neuroscience community in 2022.

The Neuropixels Program at IMEC has been funded by Howard Hughes Medical Institute (HHMI), The Wellcome Trust and The Gatsby Foundation through University College London (UCL), and The Allen Institute of Brain Research (AIBR). More recently additional funders have included The Flemish Institute for Biotechnology (VIB) and the Katholieke Universiteit Leuven (KUL) through Neuroelectronics Research Flanders (NERF), The Norwegian University for Science and Technology (NTNU), and the Champalimaud Centre for the Unknown.

For information about the probes, ordering, training, and the latest on the next generation, visit www.neuropixels.org.

More information about imec’s neural probe program can be found on their website: https://www.imec-int.com/en/expertise/lifesciences/neural-probes

The research information about the Neuropixels probes has been published in following papers, which can be requested through this form https://www.imec-int.com/en/about-us/imec-magazine/contact-form-imec-magazine