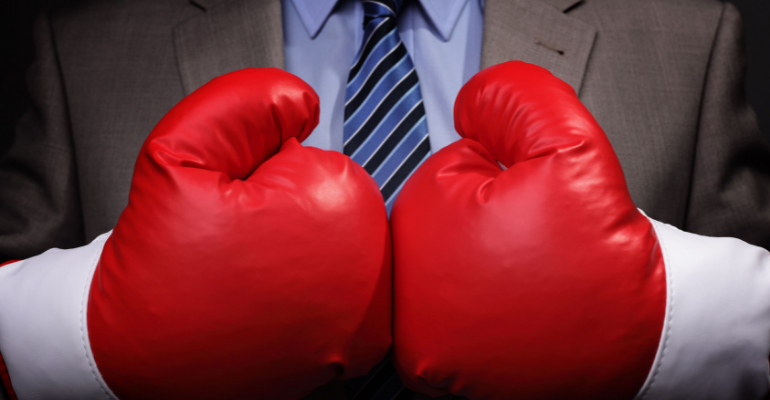 Correction: An earlier version of this story incorrectly stated that there were 250,000 to 800,000 patients in the United States with diabetic neuropathy who could potentially benefit from SCS therapy. The more accurate estimation is 750,000 to 800,000 U.S. patients with diabetic neuropathy who could potentially benfit from SCS therapy.

In an unexpected competitive move, Nevro has taken Medtronic to task after the larger medical device company scored FDA approval to market its spinal cord stimulation (SCS) therapy devices for the treatment of painful diabetic neuropathy (PDN), without generating any new data.

"Instead of the large clinical trial it has been promising to the pain and diabetes clinical communities for these patients, Medtronic has simply reintroduced two small European studies from 2014," David Caraway, MD, PhD, Nevro's chief medical officer, said in a press release last week. "One of these studies was actually sponsored by another competitor and did not even use Medtronic's products."

Caraway said that these trials, which are considerably smaller than Nevro's landmark SENZA-PDN trial, published in 2021, demonstrated results that were "dramatically inferior" to the outcomes generated in the SENZA-PDN randomized controlled trial (RCT).

"We were surprised that Medtronic gained approval without generating any new evidence to advance the field or drive adoption and coverage," Julie Dewey, a spokesperson for Nevro, told MD+DI in an email Friday. "... Only one of these studies cited by Medtronic actually includes Medtronic's SCS device, and demonstrated results that were dramatically inferior to the outcomes generated in our SENZA-PDN RCT." 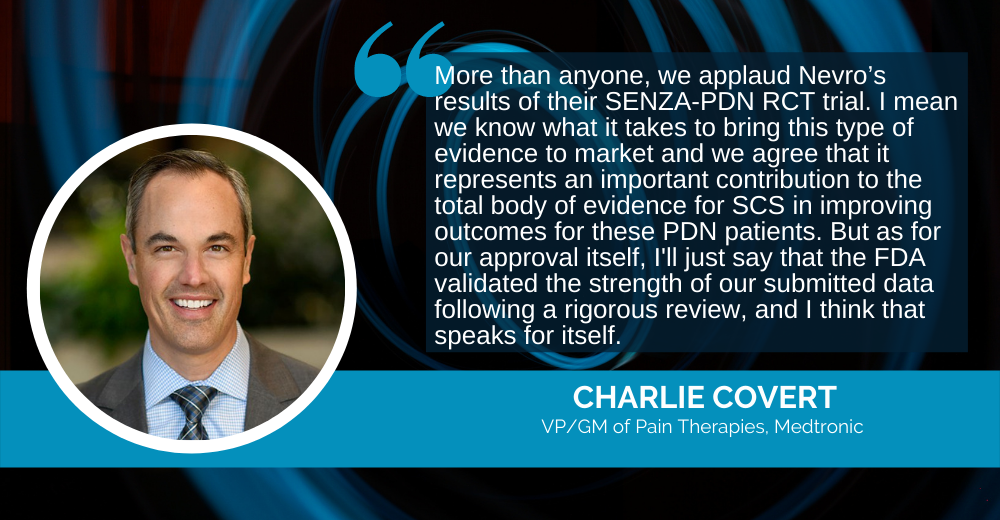 One of the studies that supported Medtronic's approval was published in the journal Diabetes Care in 2014 and was led by Rachel Slangen. At the time, Slangen was a researcher at Maastricht University Medical Centre in the Netherlands, however her LinkedIn profile shows that she has since been hired by Medtronic as a senior clinical research specialist in the company's neuromodulation business. The Slangen study was designed as a prospective, two-center randomized controlled trial and enrolled 36 patients with painful diabetic peripheral neuropathy, with 22 of those patients being randomly assigned to the group receiving SCS therapy in addition to standard medical treatment.

The other study that Medtronic referenced in its press release was published in the journal Pain in 2014, was led by Cecile de Vos, while she was a medical physicist at Medisch Spectrum Twente, in Enschede, The Netherlands. de Vos is currently a medical physicist at Erasmus MC in Rotterdam, South Holland, The Netherlands. That study enrolled 60 patients with painful diabetic neuropathy who were randomized 2:1 to conventional medical treatment with spinal cord stimulation or without additional SCS therapy.

Nevro's SENZA-PDN trial enrolled a total of 216 patients, with 103 patients in the control group receiving conventional medical management without SCS therapy, and 113 patients receiving both conventional medical management and SCS. That trial was led by Erika Petersen, MD, professor of neurological surgery and director of functional and restorative neurosurgery at the University of Arkansas for Medical Sciences.

"We believe the significant, durable outcomes from our SENZA-PDN randomized controlled trial speak for themselves, and we are disappointed in the disparity of standards supporting these two FDA approvals," Caraway said.

"We've been pioneers in the field of spinal cord stimulation for decades and advancing data, so we have an appreciation for how to do this," Covert told MD+DI. "And I'll say, you know, more than anyone, we applaud Nevro’s results of their SENZA-PDN RCT trial. I mean, we know what it takes to bring this type of evidence to market, and we agree that it represents an important contribution to the total body of evidence for SCS in improving outcomes for these PDN patients."

As for Medtronic's recent FDA approval for this patient population, Covert said the FDA validated the strength of the submitted data following a rigorous review, which he said speaks for itself.

“Our trial sizes, as Nevro called out, are smaller, but that doesn’t discount the significance clinically and statistically of the results of those trials,” Covert said. “… Evidence doesn’t really have a sell-by date, per say … these RCTs were published in 2014, but consider the timeliness of the broader body of evidence supporting spinal cord stimulation. As I said before, it was developed over decades, and guess what? We, Nevro, and everybody else references it today, and we all happily participate in markets supported by that evidence.”

Covert said Medtronic is pursuing additional evidence that will further build on the existing evidence for spinal cord stimulation therapy for patients with painful diabetic neuropathy, and he expects other manufacturers are as well.

"But to be clear, the available body of evidence today supporting spinal cord stimulation treatment for PDN is strong," he said.

SCS for painful diabetic neuropathy is a massive market opportunity

One thing both companies can agree on is that painful diabetic neuropathy represents a very large market opportunity.

"This is a population that just has not had access to this type of treatment in the past, and we believe it represents a really tremendous opportunity to help these patients," Covert said.

He estimated that there could be anywhere from 750,000 to 800,000 patients in the United States with diabetic neuropathy who could potentially benefit from SCS therapy. Medtronic said this represents an annual market opportunity of about $1.8 billion.

“If history has taught us anything in this space it’s that there is no singular therapy that benefits everyone," Covert said. "So, Medtronic is committed to ensuring that we have a set of options in a versatile platform to be able to offer patients for conditions like diabetic neuropathy, and this is the first step in that direction.”