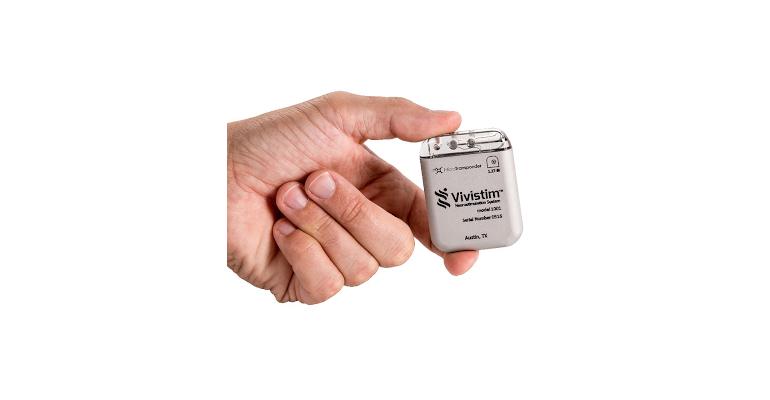 To say Austin, Texas-based MicroTransponder had a breakthrough year in 2021 is no exaggeration. In fact, the “breakthrough” nomenclature comes courtesy of FDA, which granted the Vivistim System Breakthrough Device Designation and then pre-market device approval for its Vivistim Paired VNS vagus nerve stimulation device in August.

The device utilizes a small implant in the upper chest with electrodes located on the left side of the neck, next to the vagus nerve to improve upper extremity function after ischemic stroke. In addition to the FDA approval, it also received the best new product of the year designation from industry publication Neurotech Reports in November. The vagus nerve stimulation (VNS), delivered in small pulses, is paired with traditional rehabilitation exercises performed under the supervision of a therapist.

The theory behind Vivistim is that the VNS enhances the process of neuroplasticity as recovering stroke patients’ rehab exercises rewire the brain. MicroTransponder says the device is “ideal for chronic ischemic stroke survivors who have not regained arm and hand function six months after their stroke and are considered to have moderate to severe deficits by their physician.”

The foundational pre-clinical technology behind the Vivistim was developed over the past decade at the University of Texas at Dallas’s Texas Biomedical Device Center; MicroTransponder chief scientific officer Navzer Engineer received his PhD at the university. One of the center’s researchers, Seth Hays, worked on the technology but has no connection to MicroTransponder.

“There is an idea that has been around for decades now, that if you have a neurological injury, one way you might be able to recover after that is to drive neuroplasticity or synaptic plasticity—changes in the circuits that remain after the injury,” Hays said. He and his colleagues opted for a VNS-based approach because stimulation of the cervical vagus nerve releases neuromodulators associated with that plasticity.

“The concept behind this was to look at a time when a patient was doing an exercise,” he said. “At that time, the circuits controlling the arm are active. If you do that in concurrence with VNS you are also releasing the neuromodulators with the idea it will promote synaptic plasticity in those active circuits.”

The effectiveness of the device, measured by the Upper Extremity Fugl-Meyer Assessment (FMA-UE), a stroke-specific measure of motor impairment, was demonstrated in a study published in The Lancet in April. The FDA announcement of the approval summarized the study’s results: Patients in the treatment group had an average score increase of 5 points, whereas patients in the control group had an average score increase of 2.4 points. Additionally, 47.2 percent of those in the treatment group saw an improvement of 6 or more points in the FMA-UE score 90 days post-therapy as compared with 23.6 percent in the control group.

The FDA approval allows MicroTransponder executives to launch concerted sales efforts, but they are also in the early stage of strategizing how best to be the first-of-its-kind platform to market.

“When you think about new technology coming to market, obviously an FDA approval is critical,” Richard Foust, the company’s chief commercial officer, said. “The next aspect is really understanding what is the state of healthcare—and that always comes down to how will this be paid for and is there a big enough need in the marketplace?

“The positive story we have is that there are CPT codes in place today that talk about a vagus nerve, specifically a cranial nerve. And that gives us a very good grounding of how we will be positioning our product. There is still work to be done, because we don’t have a coverage decision, but what we have is a silence on the decision, so we are not starting with a non-coverage decision.”

What is ‘Clinically Meaningful?’

The launch of the Vivistim also presents an opportunity for the neuroscience community to discuss the ramifications of existing measurements of post-stroke rehabilitation and how the definitions of functional improvement are dependent upon who is doing the defining. That discussion was primed in part by a commentary in Stroke in July by Gert Kwakkel, chair of neurorehabilitation at Amsterdam University Medical Center in the Netherlands, and Bruce Dobkin, M.D., medical director of the UCLA Neurologic Rehabilitation and Research Program.

Kwakkel and Dobkin said the Lancet study’s authors’ overall interpretation of their results as being clinically significant in the effectiveness of VNS could be interpreted to be “too optimistic” to call it a novel treatment option. However, Kwakkel and Dobkin also introduced a central confounder about how clinically meaningful improvements are defined: “Unfortunately, there is no clear consensus on a definition for a clinically meaningful improvement, otherwise called a clinically important difference, in part, because the concept may be defined from different perspectives, including clinicians, patients, statisticians, healthcare economists, and stakeholders.”

“Gert got at something that is core to the whole field,” Hays said. “You could call it a conflict, l guess, but it’s just a discussion about what does it mean? Certainly, families of survivors know what they have gone through. What does it mean to have something that’s clinically meaningful? It’s surprisingly difficult to define. So some of this will probably be post hoc—did people perceive it was helpful to them in their life? And that is a holistic discussion.”

On the other hand, Hays said, self-perceptions of improvement are problematic if a developer wants to bring something to market: “It’s hard to convince the FDA that ‘Hey, these people said this really helped them’ because they are looking at a quantitative measure—which of course they need to—but there will be some balance that needs to be struck between the more qualitative measures and the more quantitative ones.”

A Growing Market for Stroke Care

MicroTransponder’s Foust said the dynamics of stroke treatment offer innovative rehabilitation technologies a sizeable market. For instance, he said, the number of hospitals with specialized stroke care has grown from about 500 to more than 2,000 in the past decade, and emergency treatment modalities such as TPA being given in ambulances en route to emergency rooms means more people are surviving strokes.

However, Foust added, the increased number of survivors is not matched by those who recover more fully: “It doesn’t seem as though the technologies that are saving people’s lives are reducing impairments,” he said. “They go through a typical rehabilitation regimen, and about 50 percent recover and the other 50 percent have varying levels of impairment.”

The Vivistim, he said, is intended for those patients with those long-term impairments who are motivated enough to undergo the implantation surgery. The payoff, he said, is that the therapy can continue not only in outpatient rehab centers, but the patients themselves can activate the device at home by swiping a magnet over the device up to eight times a day while practicing activities of daily living that are important to them.

“Our technology is specifically for after they have gone through that six-month rehabilitation process, because we want to make sure that everything that is available at lower cost and non-invasive is done. At the point of which, if they don’t cross that threshold, there is another option for them now, and that is really the target market.”

And, according to Hays, the FDA approval means the uses for paired VNS and rehab are not limited by any means to stroke; UT-Dallas researchers and others are already working on projects to expand its utility.

“One of the important things that came out of the study was that pairing VNS with rehab is safe,” Hays said, “and has a ton of application. There is no reason it is limited to stroke. We are trying it with spinal cord injury patients now. Another study we have ongoing with some collaborators is pairing it with cognitive therapy for PTSD.

“The idea is the same, that VNS is enhancing these neuromodulators and that is basically potentiating the effects of rehab. I think you’ll see a bunch of new applications coming out for something like this, probably within the next 10 10 years."