The medical device company reports that a battery problem in one of its pacemakers could interfere with normal device function. 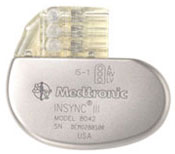 A recent recall involving roughly 96,800 InSync III pacemakers has been given Class 2 status by the FDA. The recall, which covers three different models of the pacemakers, relates to a potential battery defect. In a letter addressed to doctors, Medtronic notes that 30 devices so far have been demonstrated to have a problem with unexpected high battery impedance, which could prevent the devices from supplying enough electrical current to operate normally. The recall relates to more than 9300 devices in the United States.

The battery problem could cause a variety of problems including the unexpected loss of pacing capture, erratic behavior, fluctuations in longevity estimates, and inaccurate lead impedances.

The company has received a report of one patient death where the battery problem may have been a contributing factor. The role of the problem, however, is still unconfirmed.

In a letter to patients, Medtronic states that "if pacing capture is compromised, some patients may experience a return of heart failure symptoms due to loss of biventricular pacing. In cases involving pacemaker-dependent patients, a loss of pacing capture could result in serious injury or death."

At least 22,000 of the pacemakers remain inside patients worldwide at present.

Medtronic's cardiac-device business in Mounds View, MN is organizing the international recall of the products.

Medtronic states in the aforementioned letter to physician that "it is not possible to identify which devices might fail or when they might fail. The issue cannot be mitigated by programming changes or increasing patient follow-up frequency."

Newer generations of the company's pacemakers are not susceptible to the battery problem, thanks to a modified battery design.

Note: An earlier version of this article incorrectly stated that 220,000 pacemakers remained in patients worldwide.