Medtronic's prized biologic was just granted approval for use with two additional indications. Having reached sales of close to $1 billion at its height, the combination product, originally approved as the Infuse Bone Graft/LT-Cage, has been mired with lawsuits and Senate probes--and has been hotly debated among the medical and legal community.

FDA has granted a PMA supplement approval to Medtronic for use of the Infuse synthetic bone graft with the spinal cages. The approval will enable the company to market Infuse for use in lateral and lumbar interbody fusion procedures, enabling its Clydesdale and Perimeter cages to be used with Infuse.

In a statement, Peter Whang, MD, FACS, of the Yale School of Medicine in New Haven, CT, explained: "For my anterior and anterolateral lumbar spine fusion cases, the use of Infuse Bone Graft allows me to reliably obtain a solid arthrodesis without having to harvest bone from the patient's own hip which generally requires a second incision, results in significant pain, and increases the risk of complications such as bleeding or infection." Whang is also a consultant for Medtronic and received a total of $221,925 in compensation from Medtronic from 2013 to 2014, according to public records.

Products using bone morphogenetic protein, including Medtronic's Infuse and Stryker's OP-1, have been targeted in numerous lawsuits in recent years.

In 2011, a Yale study concluded that Infuse provides little or no benefit, according to an MPR article. Another study found that Infuse could make some men sterile.

Of the 16 IDE studies used to reach their findings, none used either the Clydesdale or Perimeter devices.

Medtronic did not do a new clinical trial to win the expanded indication, says Victor C. Rocha, from Medtronic's Media & Public Relation division. Rocha notes that the submission was based on the following key points:

Medtronic now faces thousands of injury claims related to the alleged off-label promotion of the Infuse product. In May 2014, Medtronic agreed to settle the claims of an estimated 950 plaintiffs for a total payment of $22 million.

More recently, one plaintiff, Patricia Caplinger, has filed an appeal with the U.S. Supreme Court related to the product.

In 2011, Spine Journal published a feature in its June issue stating that a critical review of the product found that "the actual risk of adverse events was 10 to 50 times the estimates originally reported."

The Spine Journal reached the conclusion that the original industry-sponsored studies related to Infuse had problems with: 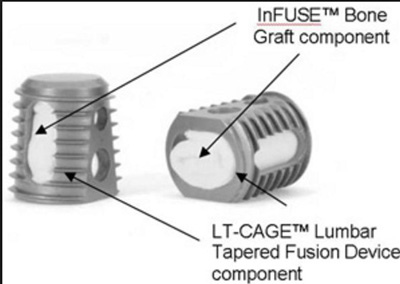 Up until the recent PMA supplement, the only interbody cages approved and required for use with Infuse biologic were the company's LT and Interfix spinal cages. Patents for the Interfix Cages and LT-Cage describe the devices as being a tapered, thimble-like cage made of titanium featuring bone ingrowth channels and a "close-end" barrier designed to prevent the leakage of osteogenic or osteoinductive materials from advancing toward the spinal cord.

An FDA spokesperson did not wish to comment on the matter.

Prior to being approved to be used in combination with the Infuse Bone Graft, the Clydesdale and Perimeter devices were FDA cleared only for use with the bone graft--not biologics.

The recent FDA approval would be in line with FDA's 2007 requirement that spinal cages commercially distributed with biologics must obtain a PMA (pursuant to 21CFR 888.3080(2)(c)). With the new PMA supplement, Medtronic can now legally market the combination of certain sizes of the Clydesdale or Perimeter with Infuse.

Thousands of lawsuits have been filed against the device giant alleging illegal promotion of its Infuse bone graft with spinal cages other than the previously required LT or Interfix cages. So this recent PMA supplement would seem to confirm that any prior promotion of the Clydesdale and Perimeter with Infuse required Medtronic to have an approved PMA in effect. What impact on previously filed lawsuits that this recent PMA supplement may have is yet unknown.

In the scores of lawsuits filed against the device maker for off-label promotion of Infuse Bone Graft for non-FDA approved indications, Medtronic's defense is that it was a doctor's decision to combine the devices and not Medtronic's, and also that because the Infuse Bone Graft was originally approved under a PMA, any claims were preempted.

Questions or comments? Write us at [email protected].