Measure Biomarkers with a Wearable Device? No Sweat

Researchers have built a device to induce perspiration and measure health indicators like blood glucose on demand. 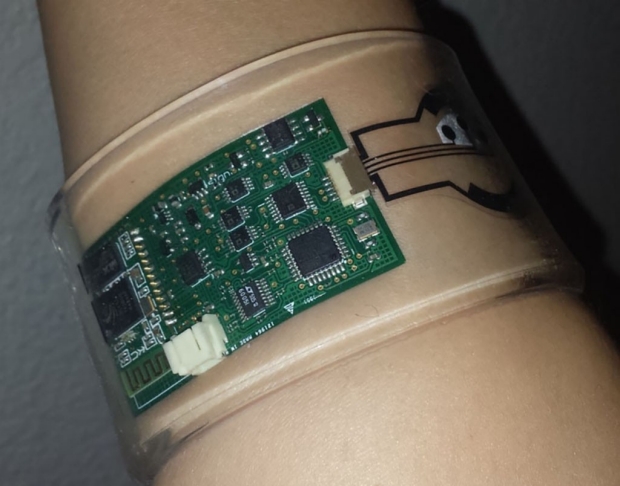 This wearable device, developed by Stanford University researchers, is designed to extract and analyze sweat to monitor health and disease.

Many of the biomarkers clinicians gain access to through a blood draw can actually be quantified in sweat itself. However, it's neither easy, nor necessarily advisable, to make sedentary or critically ill patients work up a sweat.

So a post-doctoral electrical engineering student at Stanford University invented a wearable device to simultaneously induce sweat and analyze its components. The team, led by Sam Emaminejad, showed that the wrist-worn device could detect concentrated amounts of chloride, a sign of cystic fibrosis, and might even measure blood sugar.

They placed a water-absorbent, thin rayon pad between the skin and the sensor array to collect sweat and prevent burning the skin. Rather than causing the wearer's skin to become warm, the device applies electrical currents to drive sweat-activating compounds under the skin to stimulate the sweat glands, Emaminejad told Qmed. The sweating is very localized and lasts for about 15 minutes, he said.

Results of the study were consistent with those using freshly collected sweat samples from people not wearing the device, he added. The study was published in the Proceedings of the National Academy of Sciences.

The device is wirelessly programmable through a smartphone, and could enable the wearer to sweat and measure biomarkers on demand.

"The exciting part of this technology is it's non invasive. It's real-time," said Emaminejad, now an assistant professor at the University of California at Los Angeles.

He said he believes that developing wearable biosensors will enable personalized medicine to help people to live healthier lives.

The team first studied the device in people who were able to exercise to produce sweat. That study, published in the journal Nature in 2016, selectively measured skin temperature, sweat metabolites such as glucose and lactate, and electrolytes such as sodium and potassium ions.

Although the work to measure blood glucose through sweat was preliminary, the team showed a degree of correlation between glucose in sweat and blood, Emaminejad said. The team asked healthy patients to fast overnight, and measured the glucose level in their blood and in their sweat. After they ingested a limited amount of glucose, the team measured their blood and sweat glucose levels again. The results showed a correlation in six of the seven test subjects, according to Emaminejad.

"We need to work on this," he said, especially given the increasing numbers of people at risk for diabetes. A majority of California adults are prediabetic or diabetic, according to a 2016 UCLA study. Another study, published in the Journal of the American Medical Association in 2015, indicated that about half of the U.S. adult population either had diabetes or was prediabetic.

The team is now working with clinical investigators on large-scale tests to correlate the content of people's sweat to their physiological conditions.

"This way we don't have to ask patients in ICU to get up and go on the treadmill," Emaminejad said. "I say, let's' bring sweat sensing to everyone, not just athletes."