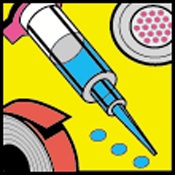 Medical device manufacturing carries with it the need for absolute product reliability and performance under many conditions. End-users expect a manufactured device to withstand the rigors of sterilization, exposure to fluids, and occasional abuse. Adhesive bonding of components conjures up fears of catastrophic failure, further amplified by the necessary use of difficult-to-bond materials. Such materials may feature high- temperature resistance, high corrosion resistance, or poor wettability, making them useful in medical environments but also making them difficult to bond. Proper procedures exist for adhesive bonding of most materials, however, and the medical products manufacturer is generally more motivated than most to pay attention to the requirements of good bonding practice.

An adhesive should be considered for joining welding-incompatible materials, such as thermosets and some thermoplastics. Conditions that call for adhesive bonding include:

An adhesive is not a substrate—its job is not to be load bearing but rather to transmit load from one component to another. The goal of any proper bond is to be strong enough to achieve substrate failure, in which the bond is stronger than the materials themselves. The next best expectation is cohesive failure, wherein the adhesive splits in failure but remains firmly attached to both substrates. Adhesive failure, in which the adhesive releases from one surface or the other, is generally considered unacceptable.

Careful attention must be paid to joint design. Adhesives work best in compression, and anything that promotes compressive loading is useful. Pure tension and shear are good loading modes for structural adhesives. The difficulty comes in avoiding peel (unsymmetrical tension) and cleavage (splitting). Adhesives that load well in tension may fail easily in peel. Thin joint gaps are typically preferred over thick gaps: a bond thickness range of 0.002 to 0.015 in. (0.05 to 0.4 mm) is a good target. The thicker the bond line, the more likely the adhesive will fail cohesively.

Figure 1 illustrates the flow of common surface preparation processes. The three principal surface-attractive forces for an adhesive bond are genuine chemical bonds, which are the strongest and most rare; polar interactions, which are the most common; and van der Waals or packing energy, which results from molecules being in close proximity. The best way to improve adhesive bonding is to improve surface polarity and the stability of the surface chemistry. This usually requires an oxidative process for plastics (to increase polarity) and an etching or anodizing process for metals (to stabilize surface chemistry). For any surface preparation method, the treatment must not damage the region below the surface, or else the point of failure will simply be moved slightly away from the bond line without imparting any real advantage.

Surface Preparation of Polymers. Plastics have naturally low surface energies, ranging from about 15-dyne level for fluoropolymers to 55-dyne level for polyesters. Corona treatment is a quick and inexpensive method for improving surface energy on plastics. This process involves the atmospheric generation of ozone in an electrical discharge, which induces oxidation of the surface. Because corona treatment can be quixotic in its effect, an alternative is oxygen plasma treatment, which requires a closed chamber but leads to more reliable oxidation. Strong plasma treatment can damage subsurface layers, so it is essential to use correct power and exposure times. Flame treatment is effective and inexpensive but requires good process control to prevent scorching.

Strong oxidizing acids, such as chromic acid, can also be used to oxidize a substrate surface, though acid oxidation carries the drawback of hazardous material handling and waste. Grit blasting or scuff sanding can be useful on some plastics, although these methods merely increase surface area and do not improve surface energy. Thus, if the surface energy is poor, one has simply increased the amount of poorly bonded surface.

Primers can be used to form a modification layer on the surface that provides an interactive surface chemistry for the adhesive. Primers are best used in very small amounts, typically resulting in a surface coating thickness of less than 10 mm (0.5 mil). Priming can be combined with other methods such as surface abrading or etching, as is frequently the case with metals bonding.

Differing preparation methods produce varying results on different materials. This is particularly evident with widely diverse plastics. For example, although they are chemically similar, polyethylene and polypropylene show different responses to the same surface treatments. On polar plastics, such as polyesters or epoxies, simple abrasion can work well.

Fluoropolymers represent a special situation. The very low surface energies of fluoropolymers (18–28-dyne level) require extensive surface preparation for most adhesives. Sodium naphthenate and potassium hydroxide etches are effective, and some methods for direct priming have been developed using molten materials to chemically modify the surface. Interestingly, copolymers of fluoropolymer with other materials allow surface preparation specific to either species. For example, a copolymer of fluoropolymer and polyethylene can be treated either at the fluorinated sites or the polyethylene sites using a chosen method such as naphthenate etch or flame treatment, respectively.

Surface Preparation of Metals. Metals are acid-etched or anodized using sulfuric, phosphoric, or chromic acids. Stainless steels, nickel, platinum, and titanium all require some type of surface etch or anodization for proper bonding. This may be followed by application of a primer. Etching acts almost as a deep cleaning, but does not give a high surface profile. Anodization produces a deeper profile, but is most effective with low-viscosity primers and adhesives. Otherwise, the deep profile remains unfilled and the mechanical advantage is lost.

Problems arise when the oxide layers rehydrate, forming unstable phases or friable hydroxides that can promote failure at the interface of the oxide and the metal, not at the adhesive-surface interface. The function of a surface preparation such as anodization on a metal is to provide a stable oxide layer that will remain constant, even following inevitable rehydration.

Ideally, the surface energy of the adhesive will match that of the substrate. Urethanes, which work exceptionally well for bonding many plastics, have a surface energy in the 40–45-dyne level range, while epoxies are at about the 45-dyne level. Metals have naturally high surface energies provided by their oxide layers.

The most common adhesives used in medical bonding are the acrylics, cyanoacrylates, epoxies, urethanes, and silicones. Their relative properties are presented in Table I. Acrylics are among the fastest curing adhesives, with excellent substrate versatility, good strength and humidity resistance, and a wide formulating range. Gap filling is modest, with joint thicknesses of 0.010 in. (0.25 mm) or less being favored. Maximum use temperature is approximately 300°F.

A derivative of acrylic chemistry, cyanoacrylates are sometimes referred to as the "superglues." These materials fixture rapidly to polar surfaces, especially those that have hydroxyl groups or residual moisture. Full cure requires about 1 day. Maximum temperature limit is approximately 220°F, which means that these adhesives are not autoclavable. Some are highly flexible and quite impact resistant, whereas others can be brittle.

Epoxies are among the most common structural adhesives for use with processing temperatures over 300°F, and they bond well to many materials. Their major positive attributes are high strength in many loading modes and excellent chemical and electrical resistance. The principal drawbacks of epoxies are relatively slow cure times and susceptibility to long-term moisture pickup in very humid atmospheres.

Urethanes are extremely versatile in bonding to many substrates, and are the first general adhesive of choice to use when joining plastics or difficult surfaces. They can cure rapidly and have good impact resistance. Their temperature limit maximizes at about 250°F, which makes them borderline candidates for autoclaving. They also display relatively poor bonding with metals under humid conditions. Some urethane versions will also moisture cure, which has been used as the basis for curing hot-melt urethanes. Newer urethane-adhesive formulations based on carbonate polyols show promise for implantable device bonding.

Silicones display a wide range of temperature applicability, being useful at temperatures as high as 500°F and as low as -60°F. They mechanically adhere to many different surfaces, but their tensile strengths and surface peel strengths are low, suggesting they are more useful as a structural sealant than as a structural adhesive. Silicones have excellent chemical and electrical resistance. Fluorinated silicones have shown benefits in bonding to fluoropolymers by virtue both of their low surface energy and the fluorination.

Ultraviolet (UV)-curable adhesives are increasingly popular because of their rapid cure properties and one-part chemistry. Most are acrylic based and cure in less than 1 minute. They often contain leachable materials but are widely used for plastics and metal assemblies outside the body. Many successful device applications take advantage of the inherent rapid assembly time and substrate versatility of UV-curable formulations.

Table II summarizes surface-preparation alternatives for many types of materials, shows a comparison chart of the major adhesive types, and provides a selector for combinations of adhesives and surface preparations. When contemplating any adhesively bonded structure, it is best to work closely with the adhesive supplier or with an applications engineer to ensure a good combination of surface preparation, adhesive selection, bonding process, and adequate testing.

Bonding in medical devices can be accomplished readily if a methodical approach to the joining method is employed. First, examine the bonding scheme to decide if in fact adhesive bonding should be used. Provide for good joint design with proper stress loading. Allow for a properly prepared surface to accept the chosen adhesive. Finally, cure the adhesive properly and maintain good process controls.

George W. Ritter, PhD, is a principal engineer in the microjoining and plastics groupww at the Edison Welding Institute (Columbus, OH).

Back to the Table of Contents