Could This Protect Implantable Devices from Dangerous Bacteria? 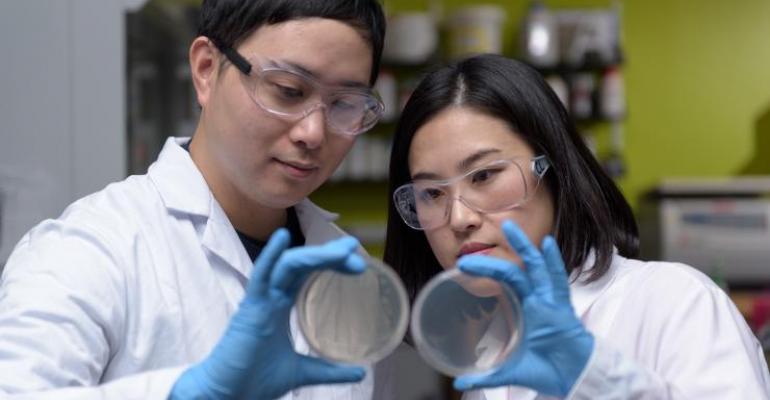 Postdoctoral Fellows Won Tae Choi and Yeongseon Jang demonstrate how the growth of bacterial colonies on agar plates was used to quantify the effect of the nanotextured surface on bacterial adhesion.
Through the process of electrochemical etching, researchers created a nanotextured material for stainless steel surfaces that can kill bacteria without harming cells.

Bacteria may need to find a new home inside the body, as researchers from Georgia Tech’s school of chemical and biomolecular engineering announced this week the development of a new electrochemical etching process that can be used on common stainless steel alloys to create a nanotextured surface with bacteria-killing spikes. If clinical studies continue to progress, the new process could have a big impact on implantable devices, providing a surface that can fight against microbial contamination.

The new process is still under investigation as researchers try to understand the specific means by which the material actually kills bacteria. Their theory is that tiny spikes and other nano-protrusions are etched onto the surface, which punctures bacterial membranes and destroys the bacteria inside. Julie Champion, an associate professor at Georgia Tech and one of the lead researchers on the project, told MD+DI that the new process is just a tweaked version of a commonly used process.

“The process is a variation on the commonly used technique of electropolishing, which smooths the surface,” she said. “It creates nanoscale valleys, which also leaves nanoscale peaks remaining, etched on the surface of any common form of stainless steel that is currently used. This technique could be applied to any current stainless steel implants, surgical tools, or even food processing equipment to prevent bacterial infection without the need for chemical coatings or antibiotics.”

Champion and her colleagues found that the nanotextured surface can kill both Gram-negative and Gram-positive bacteria, while not having any harmful effect on mammalian cells. As long as the surface does not harm cells, it can be used to protect implantable devices from bacteria — as cells must be able to adhere to implantable medical devices inside the body.

“Bacterial adhesion and growth on medical devices can lead to serious surgical and implant infections, which can be life-threatening, prevent healing and functional recovery, and incur substantial healthcare costs,” Champion says. “For example, by 2030, prosthetic joint arthroplasties are projected to increase to 3.8 million procedures per year, and the risk of infection is expected to triple for hip and knee arthroplasty, resulting in a cost of more than $1.62 billion. There is a critical need to prevent infection of implants and surgical materials. Our process to modify stainless steel implants and tools in a simple, scalable way could reduce infection, and revise surgery, mortality rates, and costs.”

The genesis of the project actually came from an idea to create a super-hydrophobic surface on stainless steel that could repel liquids. Once the team discovered this would require the use of a chemical coating — something they wanted to avoid — they decided to explore the use of a standard electrochemical process. Typically used to polish stainless steel, Champion and her colleagues thought that the electrochemical process could be used to roughen the surface at the nanometer scale.

Under microscopic examination, the surface showed protrusions 20 to 25 nanometers above the surface, much like a mountain range with sharp peaks and valleys. Even more importantly, because the process relies on a biophysical process rather than a chemical one, strains of bacteria will not be able to develop any kind of resistance to it.

As the group moves forward with their research, Champion says their next challenge is to continue to scale the process and prepare it for applications in the field of implantable medical device technologies.

“We need to demonstrate that it can be scaled to large implants and that the nanostructure can withstand the forces generated in the body,” she said. “After we demonstrate this, we need to test real nanotextured implants in animal models so that we can demonstrate prevention of infection and general performance of the implant. Since the process is simple and is not adding new components to the implants, there should be very little development needed to scale from animal model implants to human implants.”